So where do trees come from? When you go out and buy a tree do you ever think about how it was grown? Was it raised from a seed, or perhaps a cutting? Most of us have grown an apple from a pip at some point in our lives, or maybe an oak from an acorn. From that experience you know that the results can be variable, especially in the case of the apple. If the resulting tree bears fruit it is usually nothing like the apple the pip came from.

It is true that some trees, naturally occurring species, are raised from seed. Oak, ash, sycamore and many others can be grown in this way and for some purposes the variable offspring are acceptable, However if you want a particular variety of fruit, or a named variety of ornamental tree it has to be propagated vegetatively; in other words using material taken from the parent.

This could be done by taking a cutting, however some trees do not root easily or are unstable on their own roots. Commercially it is done by grafting or budding. This means taking a piece of the plant you want to propagate (the scion) and joining it onto the roots of another plant which has been raised from seed or grown from cuttings. The latter is known as the rootstock and it will confer certain characteristics on the growth of the tree you are propagating. It will also provide it with a strong root system. 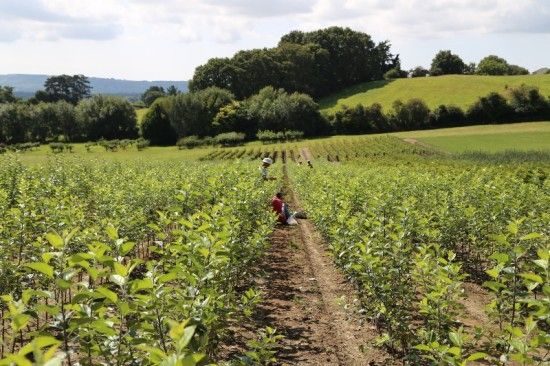 Most ornamental and fruit trees are budded. This is efficient in terms of propagation material because every single growth bud on the shoots produced in the current season is a potential tree. Budding is carried out in the field where the rootstocks are grown in mid to late summer. In the US and UK this is between mid-July and mid-August. At this stage the buds, in the leaf axils of the shoots produced in the current year are a brownish colour and so is the bark of the wood. Take a look at the new shoots on your apple trees, the bits you cut off when summer pruning and you will see what I mean.

The leaves are cut off as soon as the bud shoots are cut, leaving a short piece of the stalk of each leaf intact which can be used as a handle when placing the bud. The soft tips of the shoots are usually cut off and thrown away. The shoots are wrapped in moist cloth and polythene, or kept in a cool box until they are used. 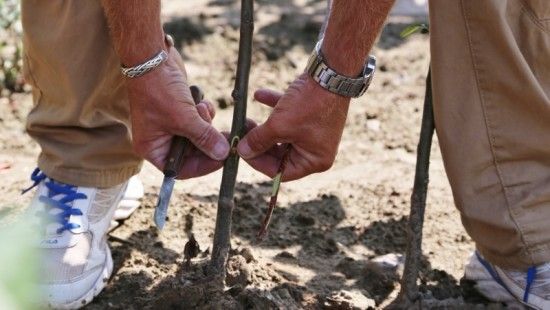 A cut is made on the stem of the rootstock about 40cm (14”) above ground level. This can be in the shape of a “T” and the bark is peeled back on both sides. Or it may be a downward cut just below the bark cutting into a sliver of the wood of the rootstock. A bud is then cut from the budwood shoot to include a thin sliver of the wood but exposing as much of the green tissue just below the outer bark as possible. This is the living cambium layer and this needs to join up with the equivalent layer of tissue on the rootstock. 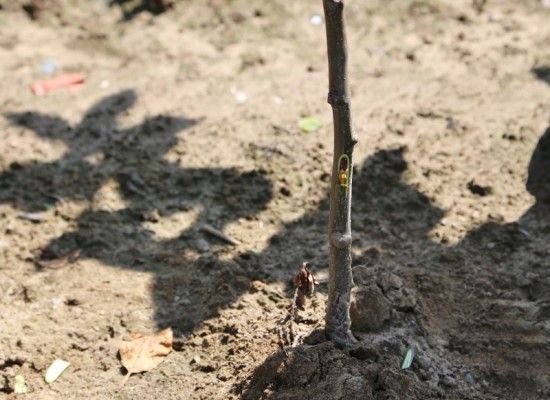 Budding is a skilled business which takes practice and talent. It is important to get it right. Every bud that fails to take is a lost tree. However speed is also of the essence because the job has to be done in a certain window. A skilled budder takes only a few seconds to cut and insert the bud. It is backbreaking work; especially in hot weather. 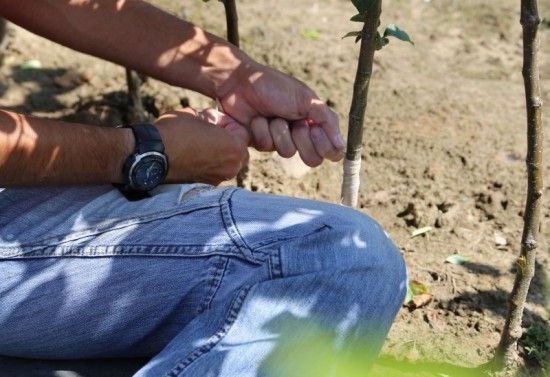 Once the bud is securely in place the bud is tied in with a rubber tie or plastic tape. This is done by a second nurseryman following the budder. Care is taken not to cover the bud and the tension is important. Rubber tape can be left in place; plastic tape needs to be cut away after two or three weeks before it binds too tightly 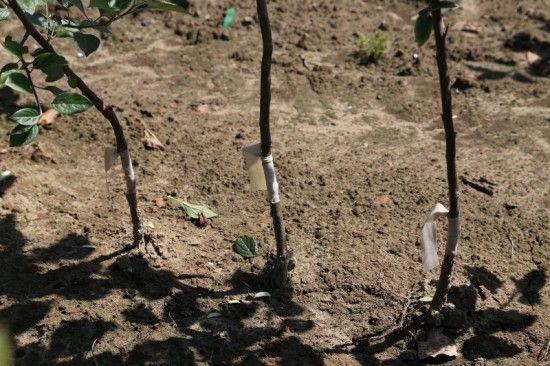 The bud should stay dormant until the following spring and obviously growth of the rootstock slows as summer turns to autumn. During this period the bond between the rootstock and the bud becomes strong ready for them to grow as one plant the following year. 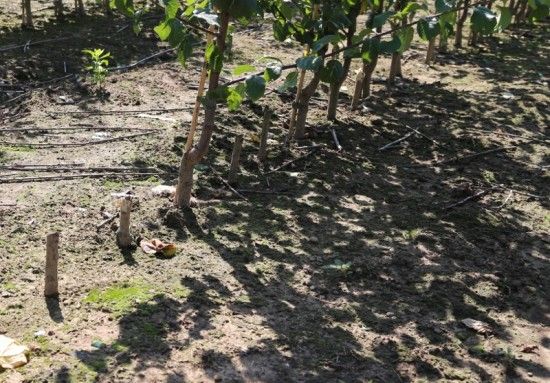 The following spring the rootstock is cut off just above the bud as soon as the shoot starts to grow from the bud.  Of course some fail to grow; hopefully not too many because every one that fails is a lost tree which could have been worth money to the nurseryman in years to come. One year on the bud has grown away to produce a maiden tree ready for the process of training as a bush, standard or however it ends up. 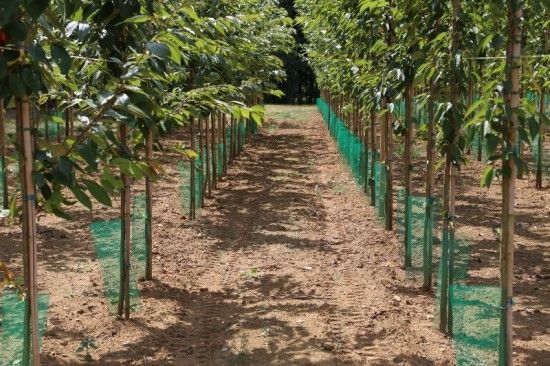 It is important to remove any shoots that arise from the understock as these will usually be stronger than the scion and can easily take over. Rootstocks are selected that produce as few of these shoots, suckers, as possible. After another year or so the young trees are either undercut or transplanted. Undercutting means a blade is run through the ground beneath the trees to prune the roots. This makes the roots branch and produce more fibrous offshoots. If this is not done when the trees are lifted a lot of the root system is lost and the trees can fail. 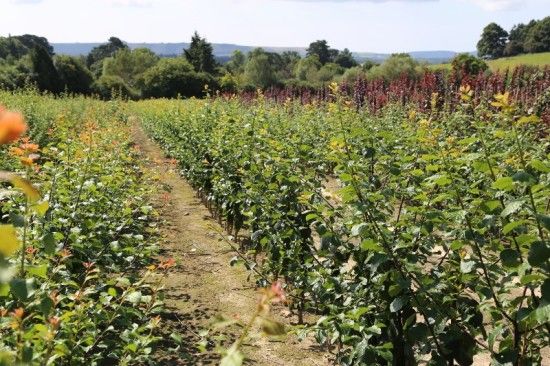 The undercutting and transplanting process may go on for a number of years to produce the size of tree required. They may also be lifted from the tree and containerised. Whatever their future the production of trees is a long and skilled process. In some cases it involves annual maintenance to shape the trees, particularly in the case of those that find their way into formal or contemporary planting schemes. The production of trees is a fascinating and complex topic; this is just a snapshot. 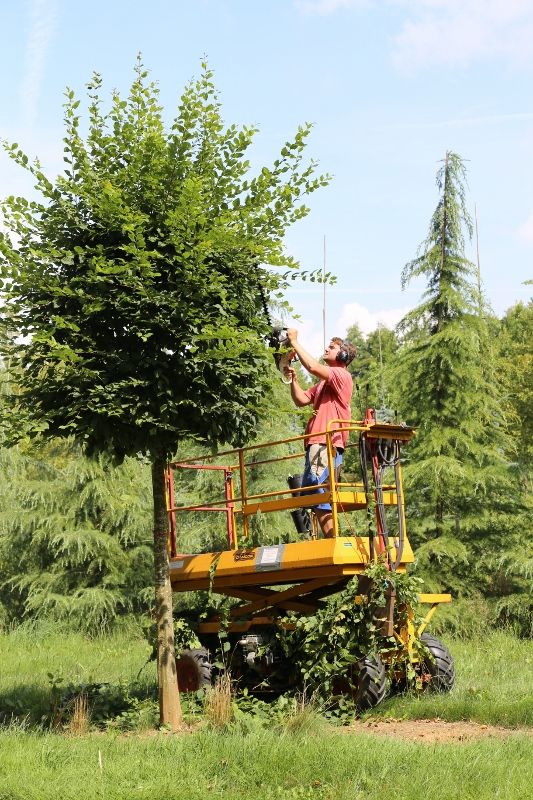