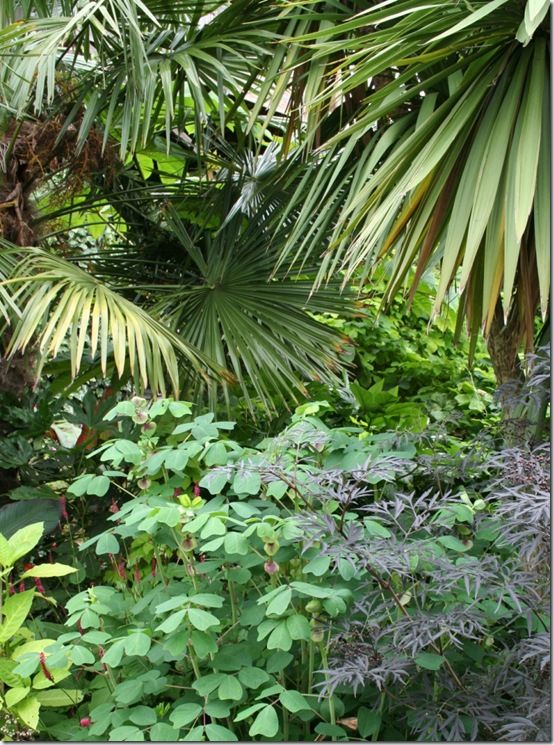 For those living in the warmer parts of the world lush tropical foliage is just part of the landscape. Those living in more temperate regions, where leaves are generally smaller and depart in the fall to reappear in spring, bold, big leaves offer a contrast. Milder winters, patio living and contemporary garden design have encouraged gardeners to be bold with exotic foliage. Cordylines, phormiums, and palms of all descriptions have become garden staples; their architectural qualities suit container gardening and delivering high impact in a small space. 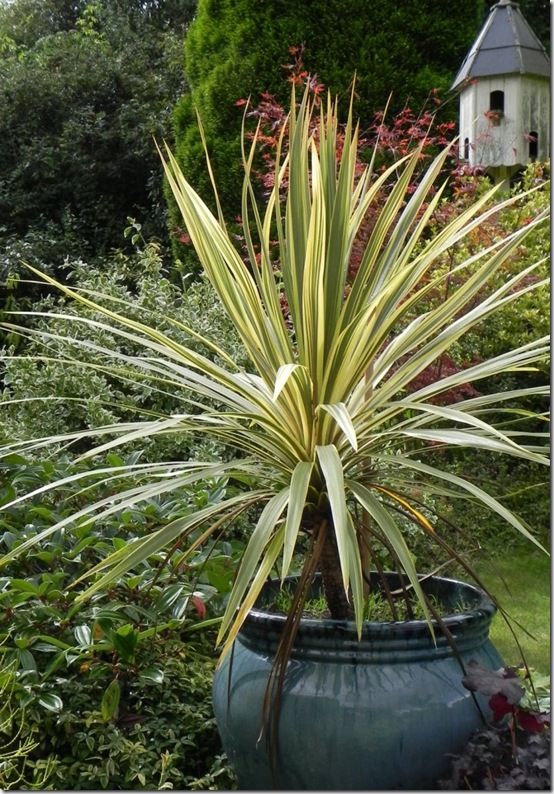 However exotics are nothing new in British gardens. The Victorians were responsible for their widespread introduction as plant collectors delivered a wider range of subjects to our shores. Some of the more tender subjects were introduced as seasonal highlights. Ricinus communis, the ‘Castor Oil Plant’ was prized for its huge hand shaped leaves that could provide such a contrast to the surrounding colourful displays of carpet bedding, a trend that lives on in some splendid parks displays. Canna indica, the Indian shot has similar qualities and the benefit of brightly coloured blooms. Gertrude Jekyll used them for summer drama in the herbaceous border and later Christopher Lloyd made them unmissable by planting en masse. 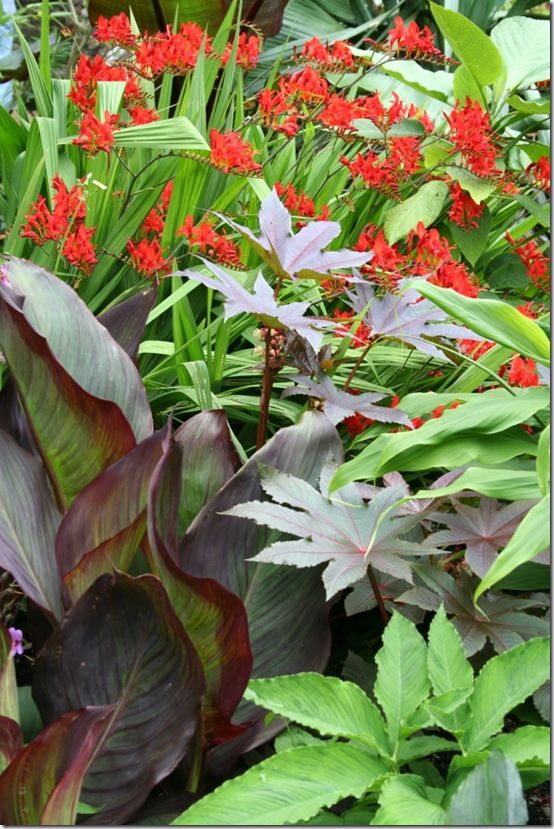 The Sussex gardener William Robinson developed the Robinsonian style of planting around 1890. He loved trees and the wilder picturesque landscape and admired great herbaceous plants with fine foliage, especially hardier exotics such as Gunnera manicata which could survive the British winter with a little protection. In Robinsonian style planting evergreen exotic subjects are combined into the natural landscape to increase drama and contrast: Phormiums, cordylines and hardy palms are some of his popular choices. The Robinsonian style is seen at its best in many great gardens that benefit from a milder climate and sheltered location such as those in southern Ireland and western Scotland. 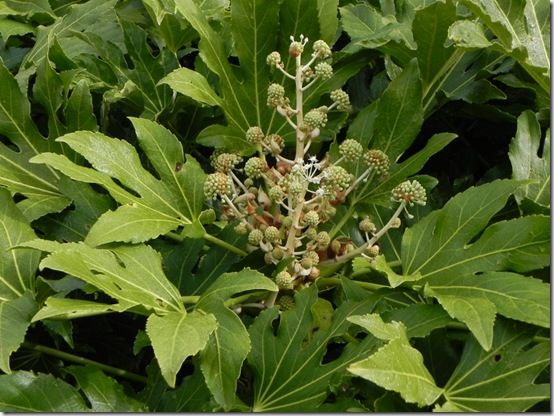 Cordyline australis, the ‘Cabbage Palm’ can look quite innocent as the fine strap shaped green leaves rise from the centre of a container of summer bedding. However growth is rapid and providing the centre of the plant is not killed off by winter frosts it will quickly start to attain statuesque proportions. After five years space is needed, but it makes a tropical planting partner for Fatsia japonica, Aucuba japonica and bamboos. Cordylines are also excellent subjects for seaside gardens. Mature specimens will reward with tiny white blossoms in a huge inflorescence with a truly tropical perfume. 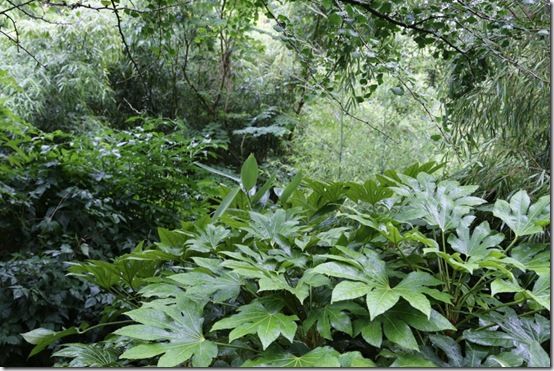 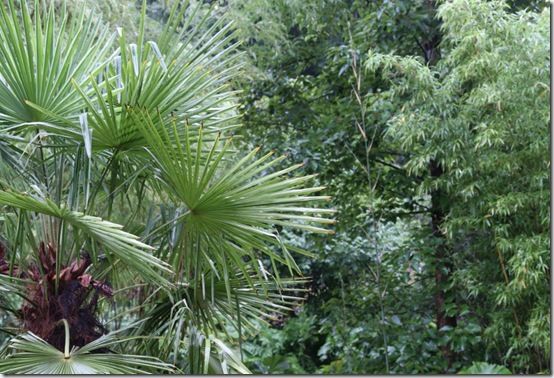 The hardiest true palm is the windmill palm, Trachycarpus fortunei. Mature specimens boast a tall vertical trunk clad with dark brown fibrous leaf bases. The huge glossy green fan-like leaves are pleated at the base opening into pointed fingers. Winter gales can damage the foliage but the plant is very hardy. Huge specimens are to be found in many great gardens across the south of England. They tower high above the tree ferns in the valley gardens of Cornwall.

I know that many gardeners could be put off by the fear that their manageable palm could reach gargantuan proportions. Fear not; choose Chamaerops humilis, a compact grower, and you will have a plant that will be a happy resident on your patio for many years to come.

The dwarf fan palm is a native of Southwest Europe and North Africa where it covers rocky mountainsides in coastal areas. It rarely grows to more than 1.5 metres (5ft) in height and sometimes forms a short trunk, though is usually more of a clump of large leathery palmate leaves. 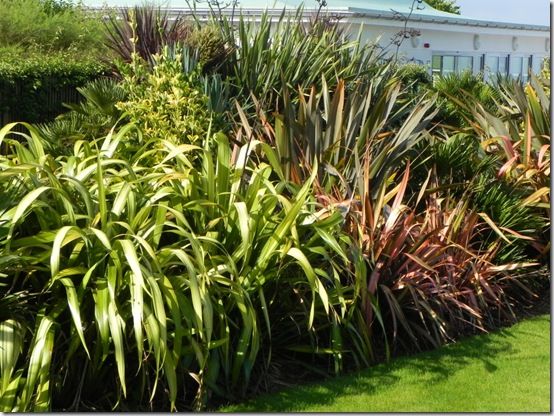 Phormiums, New Zealand flax, are widely used in containers and the open ground. Most prefer sun although they will tolerate semi-shade. They vary in stature from dwarf varieties that rarely reach knee high to robust tough subjects that tower overhead. A mass planting of phormiums can create an exotic and dramatic effect and works well in coastal situations. 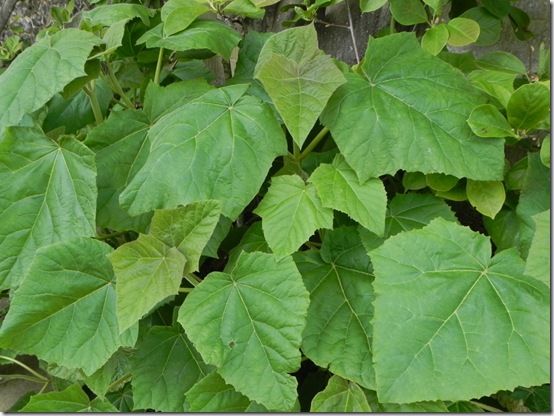 In contrast the leaves of paulownia are large, soft and almost velvety. This is the lovely foxglove tree which produces short spikes of glorious lavender blue flowers as the leaves are about to unfurl in late spring. Curiously the spikes of copper-coloured buds overwinter on the tree ready to burst in the spring sunshine. Although paulownia can grow to make a large, impressive tree it can be hard pruned from an early age. This sacrifices the flowers but results in truly enormous green leaves that will bring a tropical touch to any planting scheme. Paulownia is hardier than most of the evergreen exotics.

The golden Indian bean tree, Catalpa bignoniodes ‘Aurea’ can be treated in a similar way. The vigorous shoots and large soft golden leaves are truly spectacular after hard pruning, glorious with flame and orange autumn dahlias. 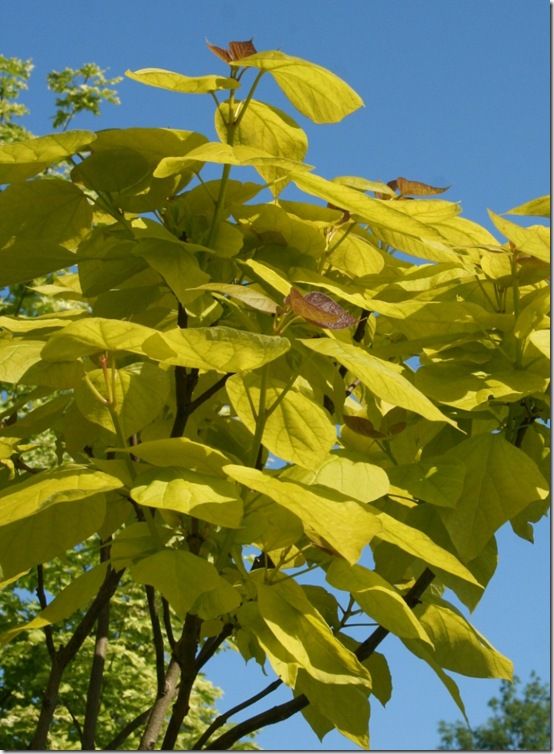 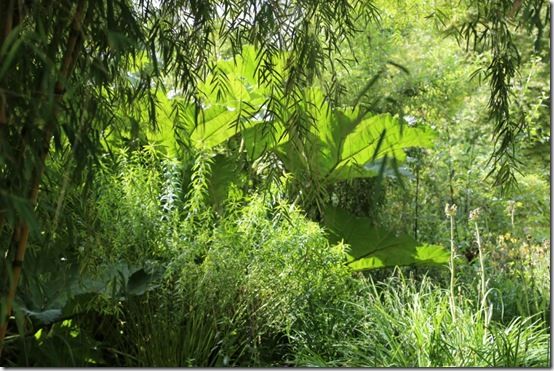 The dappled shade of trees or a shady courtyard can have a tropical feel with the introduction of big green glossy leaves. Aucubas thrive here, but the false castor oil plant, Fatsia japonica is more impressive and architectural. The large, lobed shining dark green evergreen leaves are highly reflective so shine in shade. Overgrown, leggy plants can be hard pruned to reinvigorate them and stimulate even larger leaves. The curious white flowers produced in winter are pretty exotic too!


Tip: Carry that exotic effect to ground level by underplanting with bergenias, large-leaved ivies and hostas.