When digital cameras first started to appear on the market, I was very firmly welded to my film camera, and reluctant to make the change to digital.
Apart from anything else, digital cameras contained various buttons and menus and settings that film cameras didn’t have, and which seemed to represent a whole new learning curve.  What on earth was white balance, for instance?

One of the menus whose concept was more familiar was the ISO menu.   ISO based on the Greek word isos (ἴσος, meaning equal) was used by the The International Organization for Standardization as the universal short form of its name.

In film days, a film would have an ISO rating – previously known as an ASA rating or DIN depending on whether you are in the US or Europe (ASA was short for American Standards Association, DIN was short for Deutsche Industrie Normal).

This number related to the film’s sensitivity to light.  A film with a low number (a slow film) was less sensitive to light, and so required a longer exposure to produce the same image in the same conditions as a film with a high number (a fast film).

However, the better performance of fast film in low lighting conditions was offset by the reduction in quality of the resulting image – the slower films produced better colour saturation and less grain. 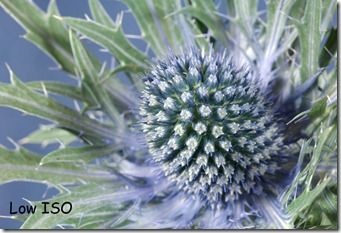 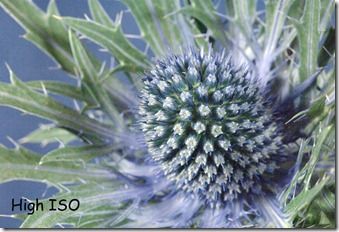 The digital ISO menu is the equivalent of this, and using the lower ISO numbers means that the sensor will be less sensitive to light, but that the quality of the image will be better.

At higher ISO settings, you will sometimes notice that your photographs become noisy – in other words, there are random speckles of colour in parts of the image that should be smooth.

With advances in technology it’s possible to use higher and higher ISO settings without noise becoming evident, but at some point it will begin to show.  It will also be usually more evident in longer exposures.

These two photos were taken to show the effect of noise at different settings, one at my camera’s lowest ISO setting and one at its highest.

Although the high ISO pic doesn’t look too bad at first sight, when you zoom into the image you can really see the speckled effect of the noise, especially in the darker areas. 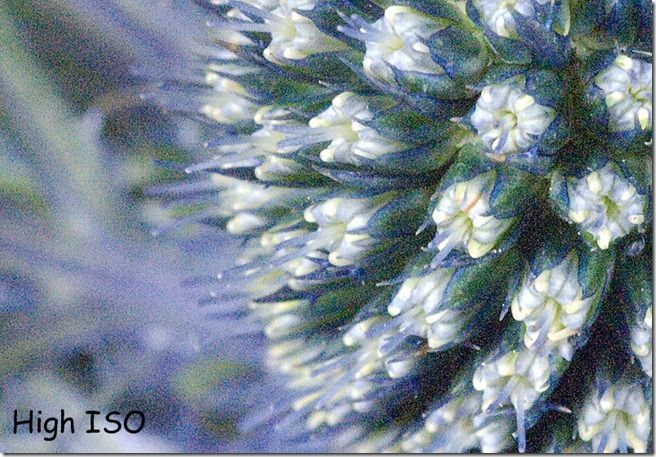 Of course the enormous benefit of the digital system over film is the fact that you can switch from one ISO setting to another between one frame and the next, whereas in film days you had to wind back a partially used film and put another one in if you wanted to change your speed.

One of the many reasons why I’m no longer looking back nostalgically at my film days!