Summer flowering bulbs are great way of adding colour to beds, borders and pots. Most flower from midsummer onwards, when early summer colour fades and the garden becomes rather green and boring. Just like spring-flowering favourites, summer flowering bulbs fit in just about anywhere, they are easy to grow and cheap to buy, and now is the time to do it. I am always surprised that so few gardeners take advantage of them. 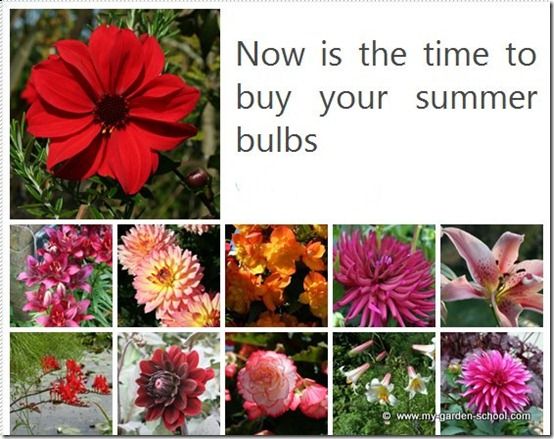 Catalogues full of summer flowering bulbs have been dropping through the letterbox in the past week or two. Personally I have a real weakness for them. Page after page of glorious dahlias, gladioli, lilies, begonias, callas, cannas and a host of more unusual and exotic subjects that I would love to try. But as with all plants new varieties appear every year, however old favourites endure, and many have earned their place as long-term summer garden basics.

Take Lilium regale for example. This species lily has been grown in gardens for more than a century. It is remarkably hardy, reliable, and still one of the most beautiful and fragrant garden lilies. Plant it in the border in groups of three or five, spacing the bulbs 10-15cm ( 4-6”) apart, at a depth of three to four times the depth of the bulb. Make sure you mark the position with a cane to avoid any hoeing or digging disasters later; remember this is a long-term garden plant. 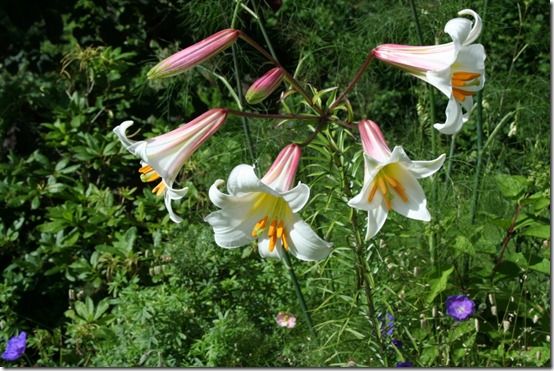 Lilium regale is lovely grown in large pots, and unlike some other fragrant lilies it will perform in a pot for several seasons if you top up with fresh compost and a generous handful of osmacote controlled release fertiliser annually. Lilies are greedy feeders; in pots or in the border, if flowering performance fades over the years, it is usually because they are starved.

If you want a shorter, deliciously scented lily for a narrow border or to grow in pots Lilium ‘Mona Lisa’ is one of the best. This has upward facing flowers of white with a deep pink bar through the centre of each petal. The perfume is heavy and sweet and the blooms are as long-lasting as any of the Oriental lilies. Buy three bulbs and plant them on their sides half way down a 30cm (12”) pot filled with multi-purpose compost for a fragrant pot-full to grace the summer terrace. 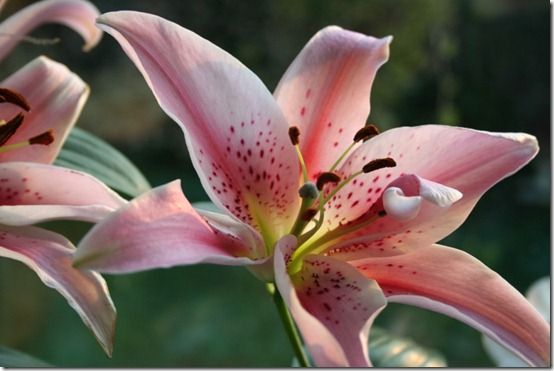 Dahlias have enjoyed renewed popularity in recent years. We are recognising their value as cut flowers, and well as colourful garden additions that bloom over a long period into autumn. Yes, there are lots of new varieties, however old favourites endure. I remember selling ‘Arabian Night’, ‘Edinburgh’, ‘Procyon’ and ‘Purple Gem’ thirty years ago; these and others like them are still favourites. 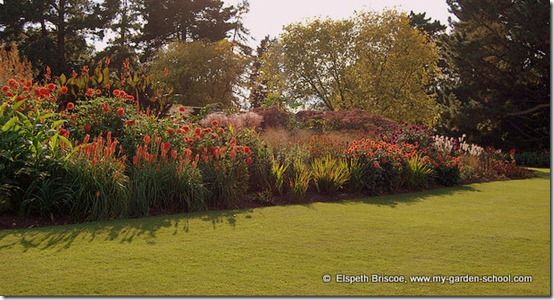 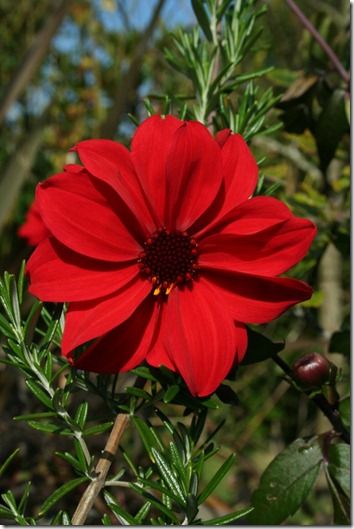 The brilliant scarlet Dahlia ‘Bishop of Llandaff’ has always been the dahlia for gardeners that just “don’t do dahlias’. Its graceful upright habit, dark leaves and scarlet blooms seem to fit in better than many larger more flamboyant dahlias. Buy the tubers now and start them individually in 20cm ( 8”) pots indoors now. Pinch out the tips of the shoots when 10cm (4”) high and again at 20cm (8”) to produce well-branched plants. Plant out when all danger of frost has passed. Try growing this dahlia with Verbena bonariensis – both plants have sleek vertical lines and strikingly brilliant flowers.

Dahlia ‘Karma Choc’ is a more recent introduction that has already become a border classic. Its deep chocolate red flowers and dark bronze foliage make a striking combination. Yes, there are other dahlias that appear in this colour spectrum but none are as striking. Once you have seen it you will spot it in a garden from forty paces. It was even outstanding in the RHS Wisley trials of dahlias in pots last summer. Try growing it in the border behind the chocolate cosmos, Cosmos atrosanguineus; incidentally this can also be grown from dormant tubers purchased now.

Crocosmias are some of the brightest stars of the midsummer garden. They are widely planted because they are such reliable performers, providing that you give them an open, sunny position. They hail from sunny South Africa; planted in shade they simply do not flower. The sword-shaped leaves of taller varieties are a welcome contrast to the soft, mounded forms of many perennials and their bright flowers offer opportunities for striking colour combinations. Again new varieties abound but Crocosmia ‘Lucifer’ is still one of the showiest and most reliable. The blooms are more red than orange, and the stems are strong and upright. Grow it with anything blue: camanulas, salvias or a long blooming blue geranium such as ‘Rozanne’. 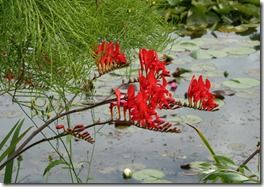 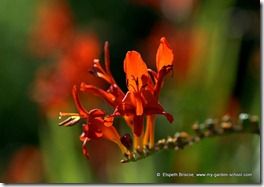 Crocosmias are always offered in pots alongside herbaceous perennials in summer. However you can plant them as corms now, just like gladioli. Plant the corms in groups of five or seven, spacing them 6cm (2”) apart, this gives them space to multiply in future years. 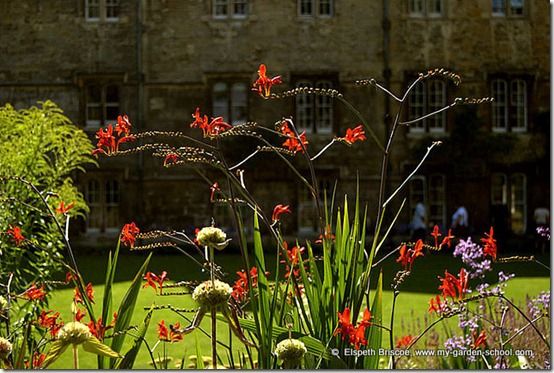 We never know what the summer weather will bring. However, rain or shine begonias keep blooming; they also manage to light up those shadier corners of the garden. In the UK A begonia tuber costs less than one pound and will give you some of the most spectacular flowers and foliage of the summer garden. Just nestle a tuber into the surface of a pot full of multi-purpose compost (tuber concave side up, convex side down) and place on a windowsill in the house or in a frost free conservatory or greenhouse. Keep the soil just moist and watch it grow. Plant out into patio pot or window box in May; enjoy the flowers until the first frosts.

Other favourites to look out for now: Nerine and amaryllis belladonna; both ideal for sunny spots at the base of walls or fences. Gladioli; great to grow for cutting – try some on the veg. patch. Anemones and freesias; delightful flowers – lovely for cutting.

Look out for another post on some of these lovelies later this month! Tell me which summer bulbs are your favourites and I’ll try and include those too. Have you grown tuberose, tried mirabilis and what about cannas? Do you love or loathe dahlias? I’d love to know – I might tell you a few stories about those too. Happy Gardening!

*NB by Elspeth Briscoe:  If you’re a Dahlia fan, check out some of these combos at the Savill Garden (More here on Winter Savill recently visited by Andy).  This video was late September a few years ago – when the herbaceous borders at the Savill Garden, Windsor were the most spectacular I’ve ever seen – here you can see the real stars of the show are the Dahlias.  Having been to Wisley the week before I was fascinated more by the structure.  But I have to say the colours at Savill and the planting in the herbaceous borders is simply awesome.  Look out for the following summer Dahlias and their companions in this video to get you in the mood for planting your summer bulbs: