I make no apologies for writing another blog about autumn colour. I am always amazed by the transformation in the garden in just a few days as the wonderful fire of fall foliage ignites. Here in England the weather has been warm and damp for the past few days; nonetheless the autumn colour is hot. I thought I would take you on a brief tour of some of the shrubs that are displaying fine fall colour right now. These glow vibrantly even on dull days, bringing more life to the autumn garden than all the flowers of midsummer.

Witch hazels colour over a long period according to location and variety. For me these plants are underrated for autumn colour which I believe is often more of a spectacle than the late winter display of flowers. Colour varies according to variety. Last week a specimen of Hamamelis x intermedia ‘Jelena’ turned to flame alongside the fence of The Sir Harold Hillier Gardens. I should have stopped and photographed but postponed. When I eventually retuned I had missed the spectacle. I was delighted to find Hamamelis x intermedia ‘Vesna’ in my own garden has produced equally spectacular orange colour. This is such a wonderful witch hazel for rich fragrance (I have often likened this to Jo Malone’s ‘Wild Fig and Cassis’, a personal guilty pleasure) and burnt orange blooms. I suspect it is less well known because of its less memorable name. 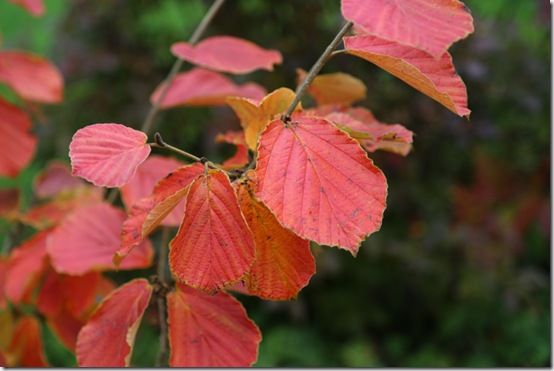 Alongside it the leaves of Hamamelis x intermedia ‘Pallida’ have turned to soft gold. The pale yellow varieties of this variety are spicily fragrant but I am always annoyed by the old brown leaves that hang on during flowering. I can forgive it in autumn when it brings a ray of golden sunshine to the garden on the dullest of days. 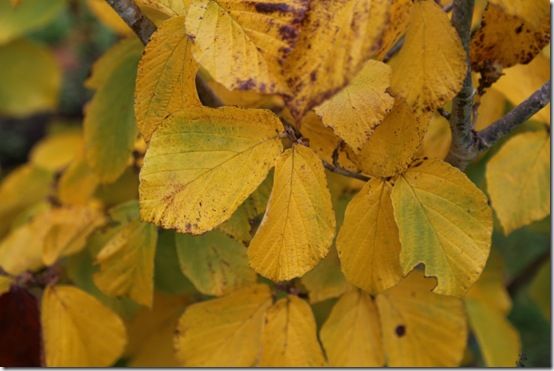 Although my soil is neutral to acid sand it is rather dry for Fothergilla major which grows slowly in the more humus rich soil under the oak trees. This has rounded leaves and interesting fluffy white flowers in spring. For me the highlight of this shrub is definitely its fall foliage. The leaves turn dark mahogany in part with shots of scarlet flame and gold. The spectacle may not be long lasting, but neither is a firework and it is just as attention grabbing. 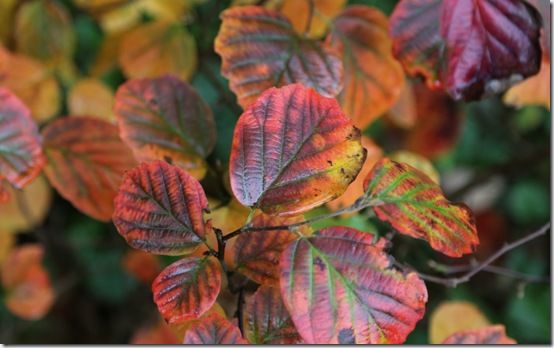 Many of the deciduous azaleas (truly rhododendrons) are good for autumn colour but none more so than the honeysuckle scented, soft yellow flowered Rhododendron luteum. This is definitely my favourite of all the rhododendrons I know and I think it has the best foliage of the deciduous azaleas, both through summer and in autumn. The fall display is long-lasting and I know it will become brighter, however the crimson and scarlet shades that develop first have incredible intensity. 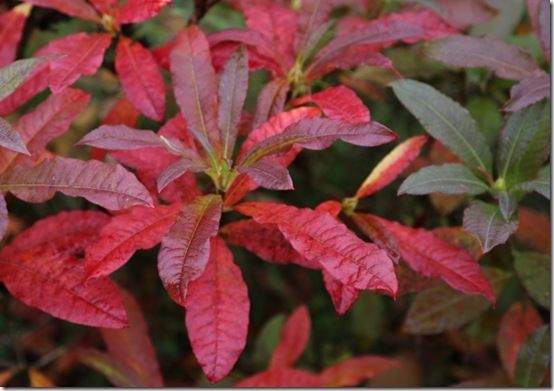 I have a number of flowering dogwoods in the garden. In early summer their display of bracts was amazing this year; now they are at it again stealing the show with leaves and fruits. Cornus ‘Eddie’s White Wonder’ has large leaves and a very open habit. The foliage has coloured richly in shades or orange and flame. I love the way the light shines through the leaves and the way they curl to reveal almost velvety undersides. 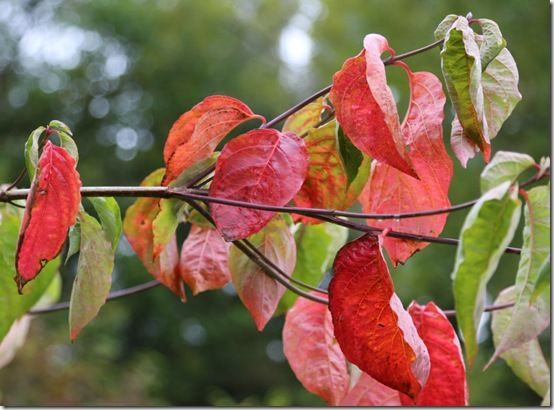 Cornus kousa var. chinensis has good fruits but its star attraction is its fall foliage in deep burnished tones of bronze red. Mine is planted under a group of birch so it does not grow vigorously and the leaves are comparatively small and narrow. It took a number of years to start flowering but now produces a good show of elegantly pointed creamy bracts. It is much more shrubby in character at an early age than some of the other flowering dogwoods. 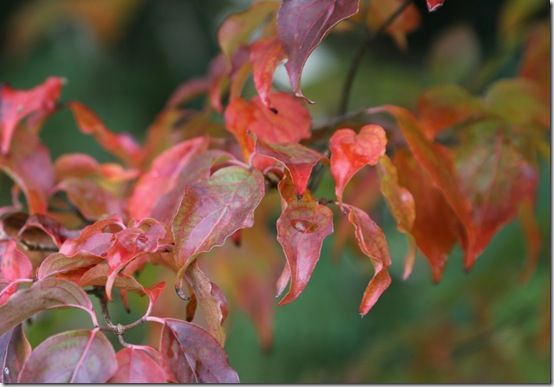 Cornus ‘Porlock’ is my favourite flowering dogwood. I have three large specimens planted in the meadow. They are broad and spreading in habit with beautiful creamy bracts that blush pink as they fade. This year their floral display was quite breathtaking; visitors to the garden were quite bewitched by their beauty. I just had to keep walking up the garden to see them. Sadly a hot dry spell of weather brought the season to rather an abrupt close. They’ve certainly made up for it now as the branches are weighed down by an unbelievable crop of strawberry-like fruits. These are edible but quite resistible; the birds like them eventually. This cornus is semi-evergreen; little in the way of autumn colour but two out of three ain’t bad!

Most Cornus alba varieties, the red barked dogwoods, are grown for their winter stems. Cornus alba ‘Sibirica Variegata’ does have good dark red stems, but it is mainly grown for its soft green and white variegated leaves. These have a tint of deep burgundy in them as the season progresses and this spreads to wonderful pink shades as the fall foliage colour develops. This is a shrub for all seasons; but never more so than in autumn. 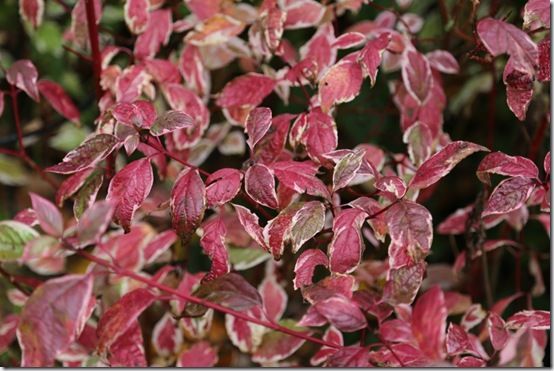 Most Japanese maples are good for autumn colour. Acer palmatum ‘Trompenburg’ is a variety I always forget about; can’t think why as I have it growing outside the back door in full view of the conservatory. Its habit is more sparse and open than many others and its leaves have narrower fingers. The colour for most of the year is deep burgundy red becoming dark scarlet in autumn; totally glorious. 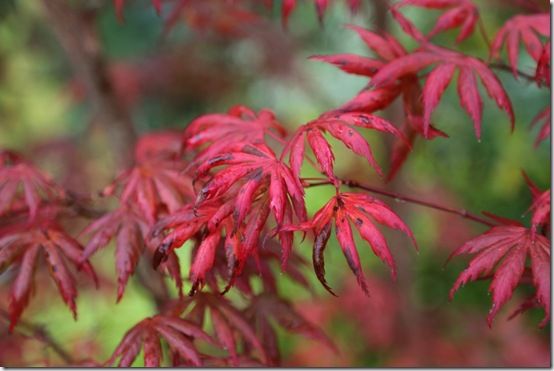 The spindle, Euonymus europaeus is at its best on chalk and it does not thrive on my dry acid sand. Euonymus europaeus ‘Red Cascade’ maintains a very leggy character and it does not fruit well but even so the autumn colour is superb. I feel it is reminding me that it would appreciate good mulch and some slow release fertiliser and I think it deserves it for its persistence and performance against all odds. 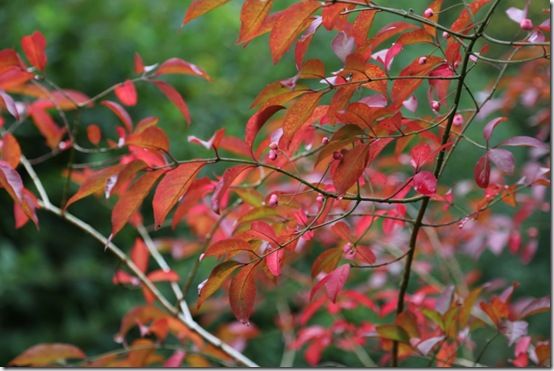 Autumn is such an underrated season in the garden, but one in which shrubs excel. My next online course, ‘Choosing and Using Shrubs in Garden Design’ starts on November 2nd Join me and I’ll show you what these wonderful plants can bring to your garden throughout the year.