The Italian lakes are a treasure trove of amazing gardens. A favoured climate and a history of wealthy residents with a passion for horticulture has resulted in ornate gardens in the Italian style adorned with botanical treasures.

Although Lake Maggiore is surrounded by the snow covered peaks of the Alps the climate is mild and snow and frost are rare and short lived by the lake.

The deep glacial lake acts as a radiator creating its own microclimate. Here more tender subjects such as palms, oleanders and citrus thrive alongside acid loving azaleas, rhododendrons and camellias. 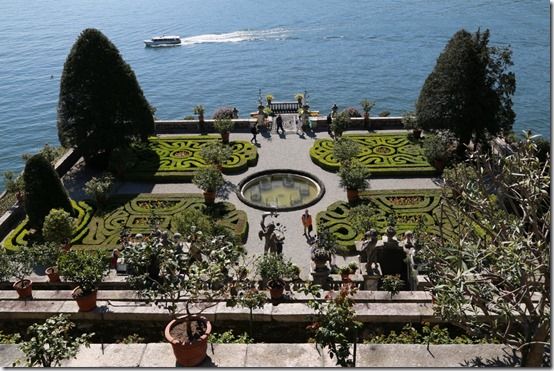 The Borromean islands are a small group of islands and islets between Stresa and Verbania in the Western arm of Lake Maggiore. The name comes from the Borromeo family who acquired them in the 16th century. Two, Isola Bella and Isola Madre are noted for their gardens. We stayed in Stresa so both are easily reached by a short boat ride.

Isola Bella was originally a large barren rock where members of the family developed a large summer palace. Thousands of tons of soil were imported to form the ten terraces which form the structure of the ornate Italian garden with balustrades, statues and fountains. The aspects of the terraces make them warm and favoured; ideal for citrus and oleander and for the many lizards that bask in the sun there. 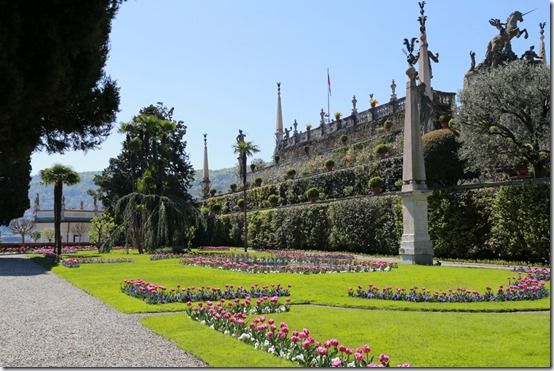 Sparkling green lawns are embroidered with bright seasonal bedding; steps and terraces are decorated with topiary and pots of colour. The ornate stepped structure is magnificent and impressive, but rather absurd in a way. A masterpiece of its time – built to impress alongside the flamboyant structure of the palace. 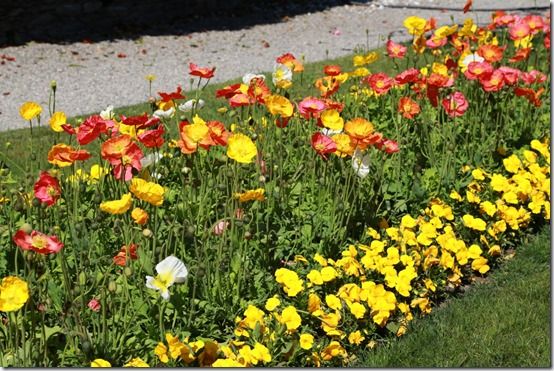 Isola Madre is a contrast. A quieter island and garden; more informal and largely in the English style. The approach is along a terrace which hugs the shore. Here again the microclimate is warm and favoured with agaves, palms, beschoneria, acacia and many tender woody plants. Bright beds of Papaver nudicaule with pansies add seasonal colour. I was surprised by the prevalence of Iceland poppies which seem to thrive here: their brilliant citrus shades entirely in keeping with the sunshine. 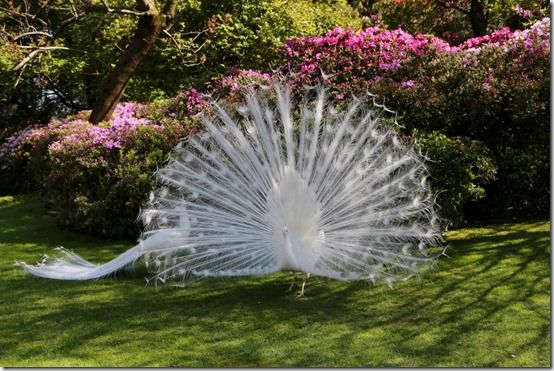 Both gardens have their fair share of exotic birds, especially peacocks. The white peacocks at Isola Madre were quite magnificent and ready to display their tail feathers. Somehow they look entirely in keeping amongst the exotic flora, especially the camellias. 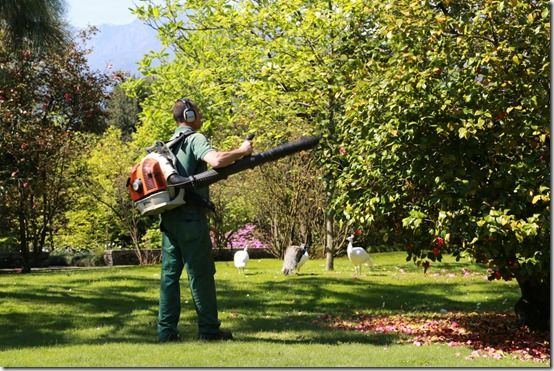 The standard of upkeep in both gardens was outstanding. The few gardeners are clearly highly efficient and organised. I loved this way of cleaning the faded blooms from camellias. Most camellia japonica have the annoying habit of hanging on to their faded flowers which stick to the foliage. Using a blower vac is an efficient way to dislodge the faded flowers and clear them from the grass beneath. The peacocks seemed quite unfazed by the activity. 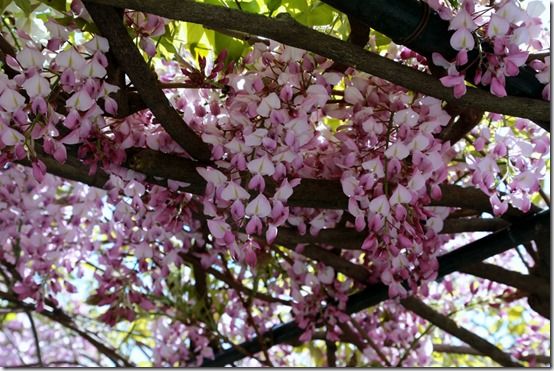 Isola madre has a particularly fine collection of wisterias and, like most of the plants in the garden labelling is excellent. The lovely white Wisteria ‘Shiro Kapitan’ filled the terrace with its heavy tropical fragrance. I was particularly taken with the pink blossoms of Wisteria brachybotrys ‘Showa Beni’; although the racemes are not long, the plant seems very floriferous and the colour is divine. 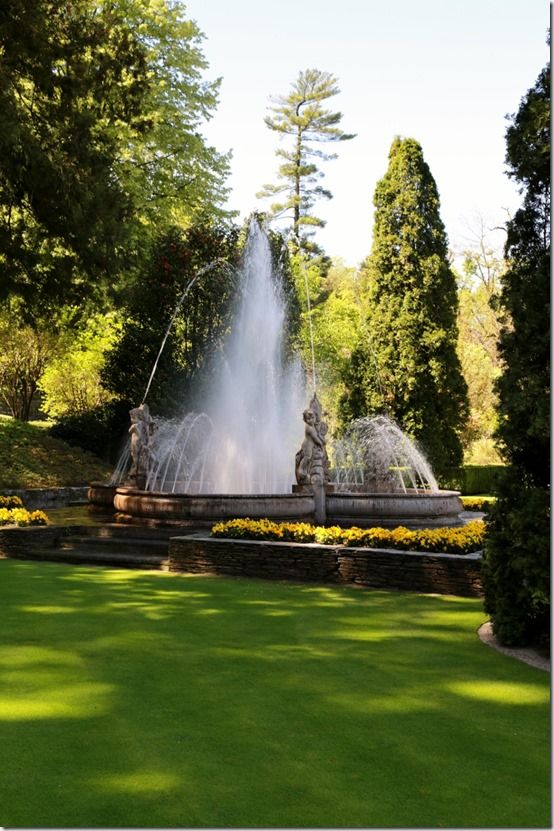 Giardini Botanici Villa Taranto is located on the Western Shore of Lake Maggiore. 16 hectares (40 acres) of gardens containing 20,000 different varieties of plants in a magnificent setting. The gardens are the work of a Scotsman who created them during the 1930s before he was asked to leave Italy during World War 2. He returned after the war and, despite a near death experience of his return journey from Australia, continued his quest to establish this magnificent collection. 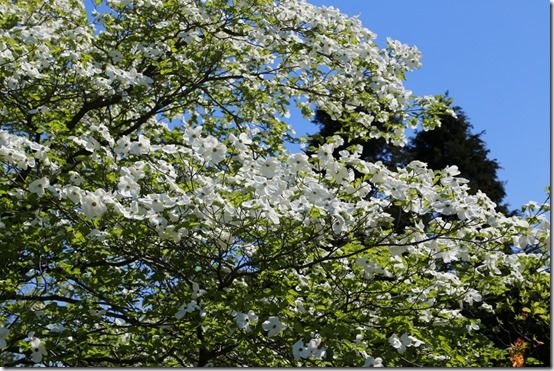 Today magnificent flowering dogwoods, Cornus florida and Cornus nuttallii are some of the largest specimens I have seen. Several specimens of Davidia involucrata, the handkerchief tree, are vast and spreading, their branches festooned with the fluttering white bracts. 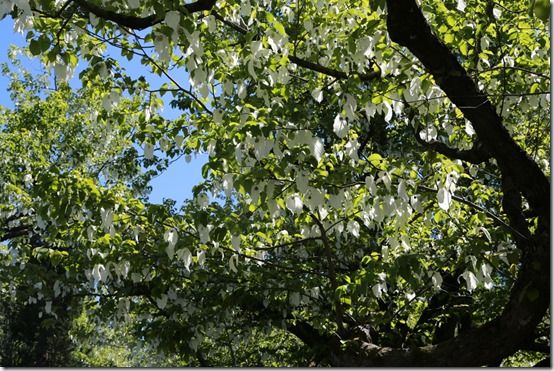 Visiting in April we enjoyed the best of the cornus, azaleas and wisterias and caught the end of the magnolias and camellias. Emerging perennials showed the promise of things to come. A large pool up on the terraces is filled with lotuses in summer and a special glasshouse is home to the vast waterlily Victoria amazonica. Unlike many botanical gardens, Taranto has colour and spectacle. The upper terraces are filled with formal bedding: pansies for spring. This part is more Italianate than the naturalistic areas of the gardens containing mature trees and shrubs. 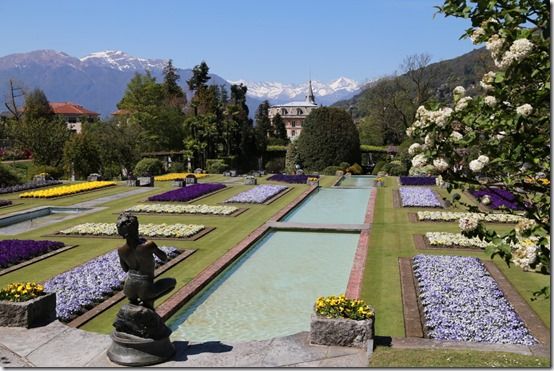 We visited during the April tulip festival; the blooms were spectacular despite the hot, dry spring weather. Whether you are a fan of colour blocks of spring bulbs or not the meandering layout is impressive and spectacular. I would like to see this garden again later in the year when those beds are high and vibrant with dahlias. 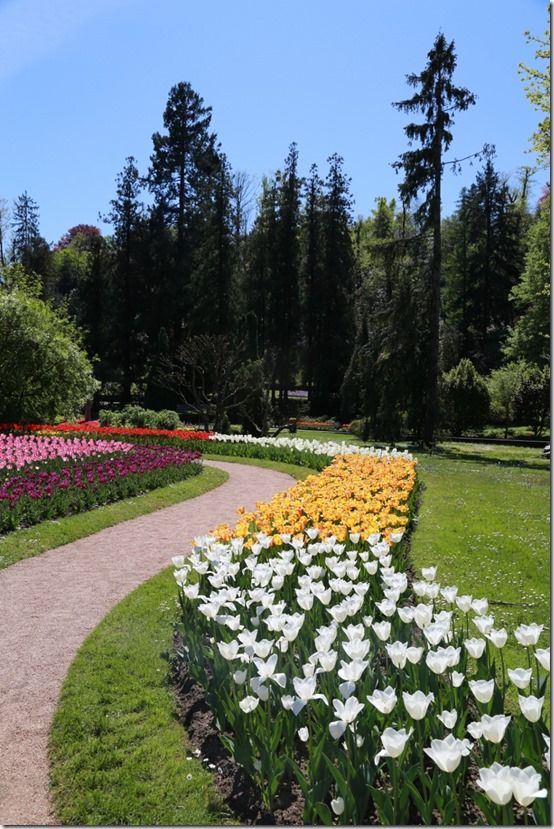 This was my first visit to the Italian Lakes. I loved it and definitely plan to go back; there are so many gardens to visit and it is an easy place to get around. We flew to Milan Linate (Milan Malpensa is closer to Stresa). We stayed in Stresa at Hotel La Palma, an excellent privately owned hotel with a wonderful roof terrace .

For a local tour guide contact Micaela Luccini , she has an excellent knowledge of the gardens.