Early summer may be the time for roses, but they certainly have competition from other flamboyant blooms in the border. These are what I call the guilty pleasures of the garden. We know we should be looking for plants that deliver more than one season of interest, plants that work hard to earn their keep. However there are certain perennials that we most desire. Their season may be short, but their impact is immense and few can resist their opulent charms. It is easy to dismiss a rose that blooms only once and does not repeat throughout summer. But, an oriental poppy or a peony, or a bearded iris; now, that is quite a different matter. We forgive its fleeting appearance; after all there is only another year to wait for a few days of sheer pleasure. 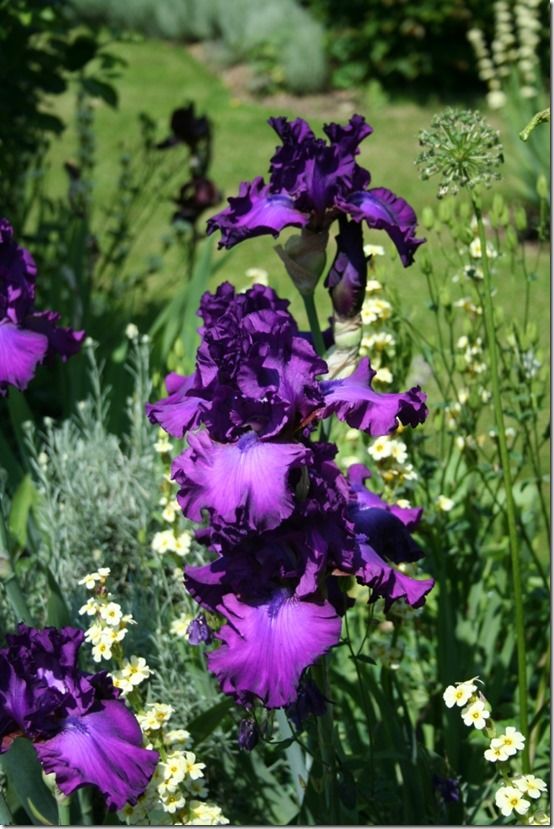 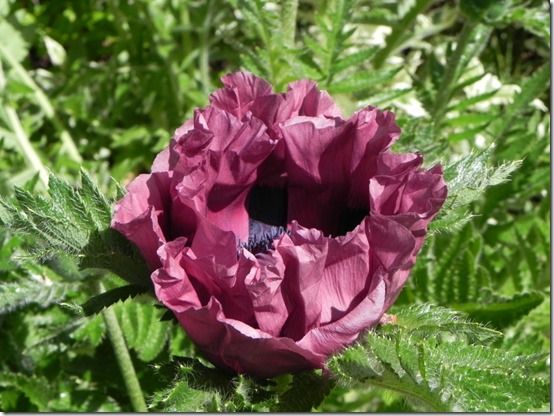 The oriental poppies can be the most bewitching beauties of the border. Their huge silky blooms, often in outrageous neon shades of orange, salmon or scarlet are impossible to ignore. Many carry their large open flowers on long unruly stems that immediately become double jointed at the base as the flowers open. As a result they collapse, and sprawl across their neighbours. Some produce stouter stems and stay upright; the dusky mauve-grey ‘Patty’s Plum’ for example. The newer American hybrids such as ‘Rhapsody in Red’ are also stronger and more weather resistant. Their blooms are also longer lasting, staying in good condition for several days. 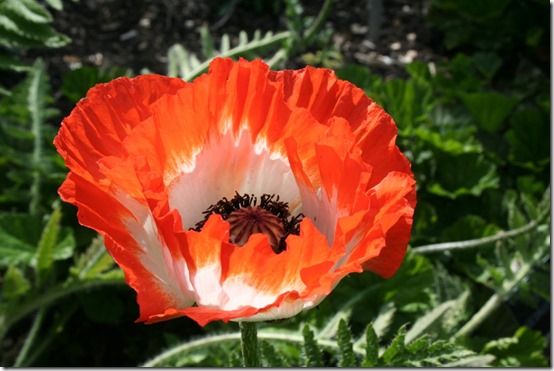 So, what are the secrets of success if you want to get the best out of Oriental poppies? Firstly choose an open sunny position and well-drained soil. Their ancestors are natives of Turkey and the Caucasus so they don’t do wet. If you grow tall varieties think about supporting their stems with hazel twigs or metal plant supports before they get to flowering height. Plant them alongside purple foliage shrubs such as cotinus or physocarpus. They help their vibrant colours to fit into any planting scheme. Finally remember that their season is short; then they die back and rest. Make sure you plant them alongside something else that will perform later in the season. A foliage shrub such as Cornus alba ‘Sibirica Variegata’ is a good choice. 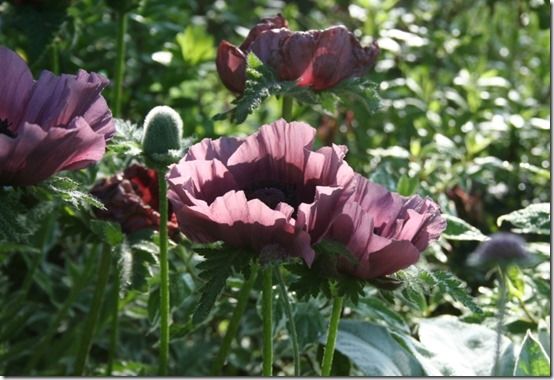 Peonies have a reputation for being temperamental beauties. Some say that they are notoriously difficult to move, and they will be reluctant to bloom as a result of relocation. This is only the case if they are planted too deeply. Always plant them with no more than two centimetres of soil over the crown of the plant. If you have a peony that refuses to bloom, despite reasonable care and attention, then dig it up and plant it nearer to the surface. I guarantee it will flower next season. Peonies are unsurpassable when it comes to size and opulence of flower. Their glorious blooms, crammed with satin petals, can be heavy when saturated with summer rain, so make sure they have something to lean on before they fall. When the flowers have finished leave the seedheads in place – they can be just as beautiful as the flowers, and the foliage should remain in good condition, giving substance to the border for the rest of the season. 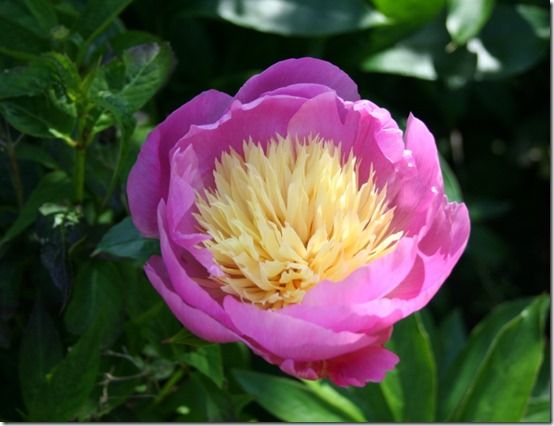 Peonies are long term garden plants that will be with you for many years. They like an annual mulch with good garden compost, or well-rotted manure, and an application of slow release fertiliser once a year, either in spring or just after flowering.

Old favourite varieties are still widely available and very popular. The delicately scented white ‘Duchesse de Nemours’ takes some beating. The lovely ‘Bowl of Beauty’ with its silky pink petals cupped around a puff of clotted cream petaloids reliably produces a fantastic display of flowers. I have the crimson ‘Lord Kitchener’ which was given to me by his granddaughter; a great collector and lover of peonies. 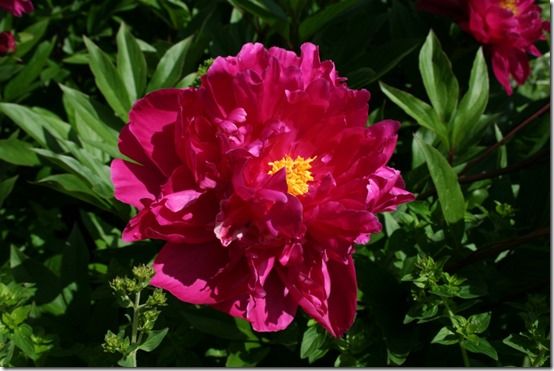 Bearded irises really are a fleeting pleasure in the summer garden, but few flowers attract so much attention. Their colour range is immense and the number of varieties seems endless. I have a number in the garden and I really don’t know the correct name of any of the varieties. Somehow to me that’s not important; I just love them anyway. 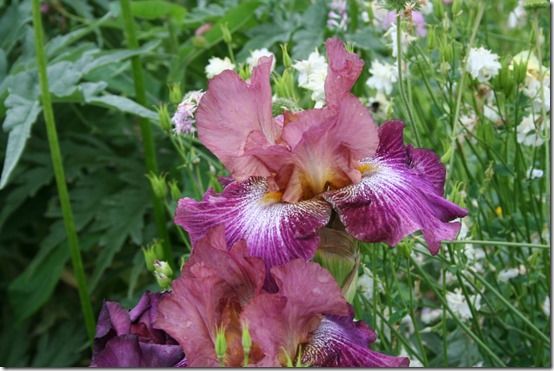 After bearded irises have flowered the plants have little appeal. They are not happy when overcrowded by other subjects, so this is another reason why you need to give a little thought to their position in the garden. The secret of success is to make sure that they get the sun on their backs; their rhizomes that is. These creep along the soil surface and should not be overshadowed by neighbouring plants. Either plant then at the front of a sunny border or in a narrow border at the base of a south or west facing wall. 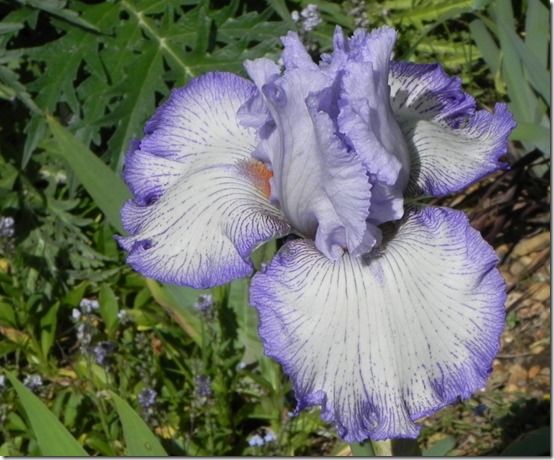 They like fertile soil that is well drained. The most important thing to keep them blooming is to divide them and uncrowd the rhizomes every few years, otherwise performance slips. You can lift and divide the clumps straight after flowering. Choose the youngest rhizomes and separate them from the older parts further back in the clumps. Cut back the foliage, by one third to a half, and replant them keeping the rhizome on the soil surface. The easiest way to do this is to anchor then against a short cane pushed into the ground. Tie the upright fan of leaves to the cane and push the rhizome at their base into the soil surface: it will quickly take root. 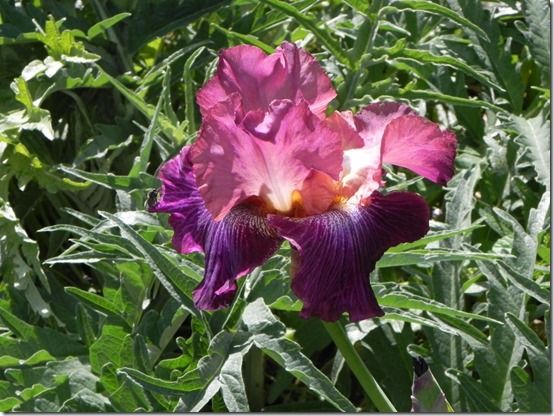 Apart from these round and wonderfully flamboyant bold blooms, there are all those glorious architectural spikes of the summer border. Delphiniums, lupins and foxgloves excel and add a vertical dimension to the planting. Lupins like well drained neutral to acid conditions, but will succeed on most well-drained soils. You need to understand that they are not long lived, so be prepared to replant every two or three years. Cut them back after flowering, feed them and water them, and they will often reward with a second crop of flowers. Sadly your guilty pleasures won’t; you will just have to wait until next year.