When I was a boy lanterns at Halloween were nearly always made from hollowed out swedes, these are the orange-fleshed root vegetables referred to as turnips in some areas and ‘neeps’ in Scotland. They are the mashed up orange things you eat with haggis and potatoes. Pumpkins were rarely seen, except in story books. The tradition of making lanterns out of vegetables probably comes from Irish Folklore. Legend has it that a notorious drunkard and prankster called Jack tricked the devil into climbing a tree. He then trapped him there by carving a cross on the trunk of the tree. Jack made a deal with the devil that if he promised never to tempt him to drink or trick people again he would release him. 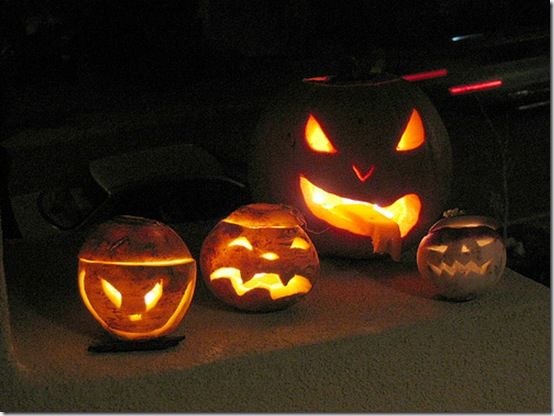 When Jack died he was not allowed to enter heaven because of his evil ways. The devil wouldn’t let him into hell either because he had tracked him in life. Instead the devil gave him a glowing ember in a hollowed out turnip to light his was while wandering through eternal darkness; hence the so called ‘Jack o’ Lantern’, a candle in a hollowed turnip that we light on Halloween. The pumpkin came into play through the early American settlers who found the pumpkin more plentiful than the turnip, and so the tradition grew. 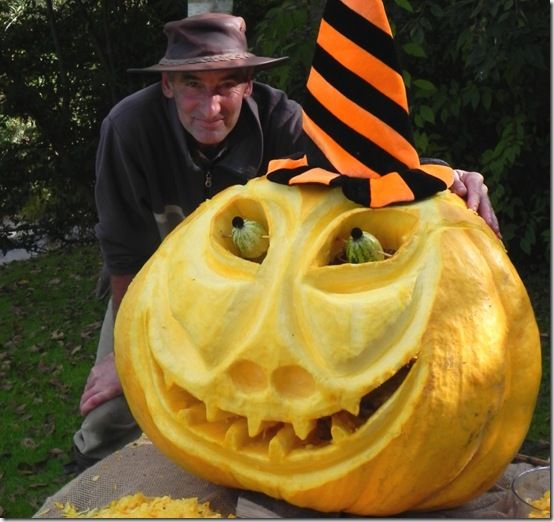 We did a fair bit of pumpkin carving on the blog last year. My friend Ian was a champion pumpkin grower and turns his hand to carving a mean pumpkin. Take a look: http://www.my-garden-school.com/growing-pumpkins-and-pumpkin-carving-a-little-halloween-magic-with-andy-and-ian/

Certainly here in the UK the pumpkin tradition seems to go from strength to strength and Halloween has become a more important date on the calendar. Visiting various National Trust gardens this year Halloween and pumpkin growing are high on the agenda. No National Trust kitchen garden is complete without its pumpkin patch producing a variety of these massive cucurbits for autumn ‘Spooktaculars”. 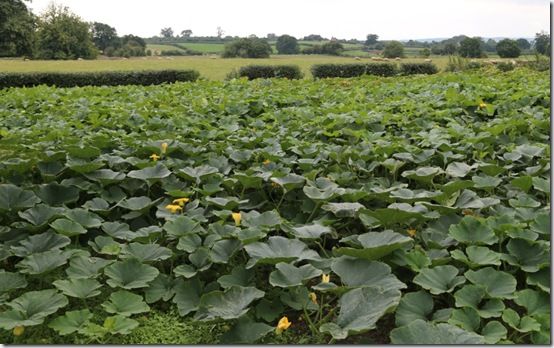 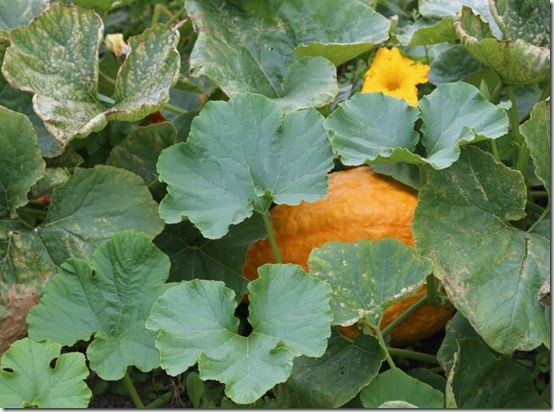 I recently visited Kingston Lacy, a magnificent National trust house that was built to resemble an Italian palace in Dorset, Southern England. The gardens are in the process of restoration in many areas, including the kitchen garden. Here a large area is given over to Community Growing Spaces, mini-allotments where local National trust members can grow their own food. Many of these plots featured different varieties of pumpkins and squashes. 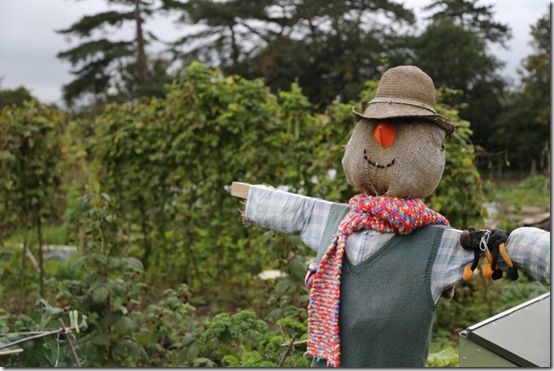 I have to admit I really love the rich colours and fascinating forms of pumpkins and squashes and I prefer them in their natural state. My contribution to Halloween decor is a group of squashes next to a terracotta pot on the doorstep. These will gradually make their way into the kitchen and be replenished. 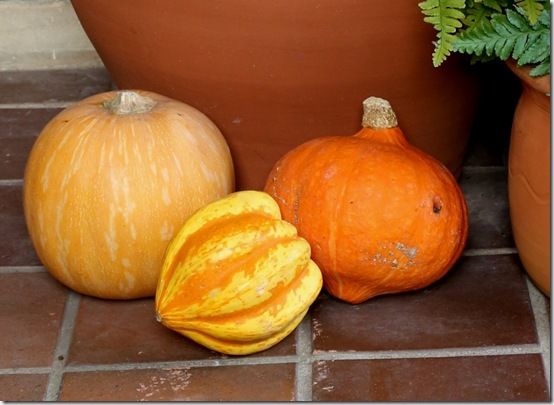 I have had some success growing different types of squash in the garden here, but only down on the compost heaps where the ground is moister and rich in organic matter. My soil is very sandy and free draining so cucurbits don’t really thrive. They tend to like a good rich soil with enough moisture. I do miss them in the garden at this time of the year. I always think they are at their most magical when those huge leaves and fleshy stems collapse to reveal glowing orange fruits. 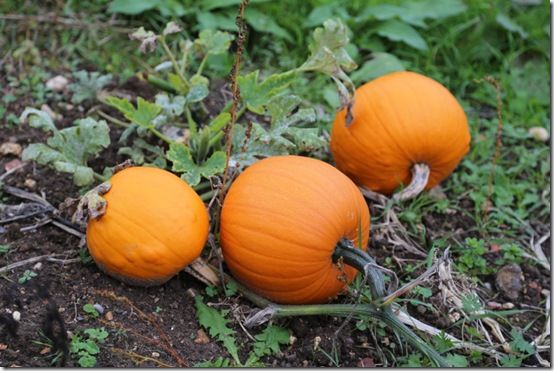 I may not have a carved pumpkin on the doorstep but I certainly have plenty of seasonal colours in the pots on the terrace and as highlights in the borders. I love those orange, red and flame shades around this time of the year and they are particularly effective contrasted with some devilish black foliage. 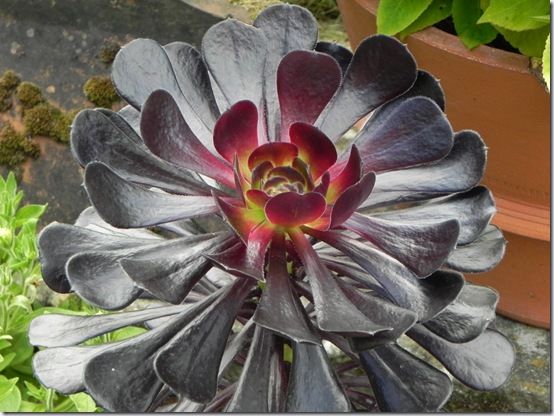 The succulent Aeonium ‘Schwartzkopf’ is at its most intense right now; huge shining rosettes of black purple appearing bigger and bolder in the low autumn light. I know it will be damaged by the first frost, but I hold off moving it indoors for as long as possible. I know that in the conservatory it will quickly revert to a shade of muddy green. I am confident its bold presence will ward off evil frost until after Halloween. 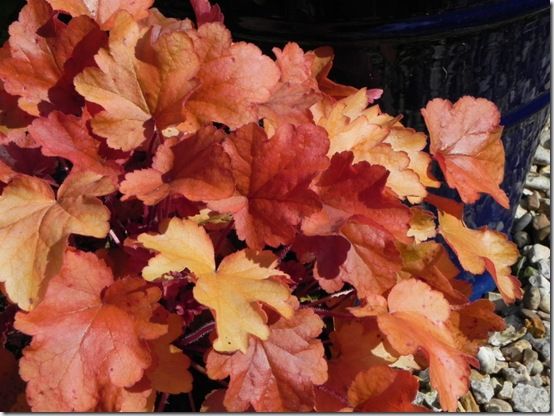 The caramel coloured heucheras are all the richer for some cool nights. Their foliage glows as the days get shorter and they really add a little Halloween magic to the pots with their fruity pumpkin colours. Heuchera ‘Peach Flambe’ and Heuchera ‘Marmalade’ sound too sweet to be devilishly hot in pots, but judge for yourself. 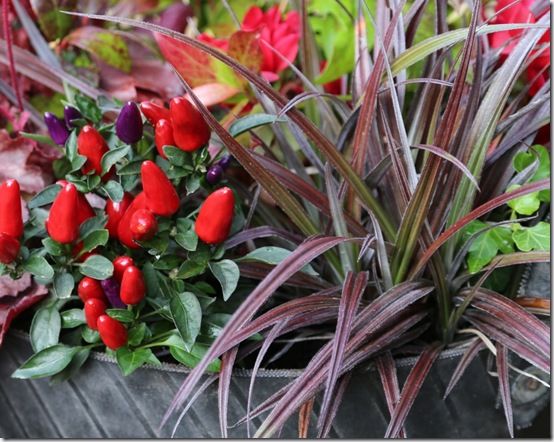 I am really impressed with the small compact Astelia ‘Red Devil’ I’ve teamed up with a red hot capsicum in one of my pots. This spiky little plant has dark steely foliage with a hint of deep red. It’s not for the faint hearted and perfect for a potent planting cocktail. It would be good in a nice dark red pot on its own, or maybe teamed up with black ophiopogon. 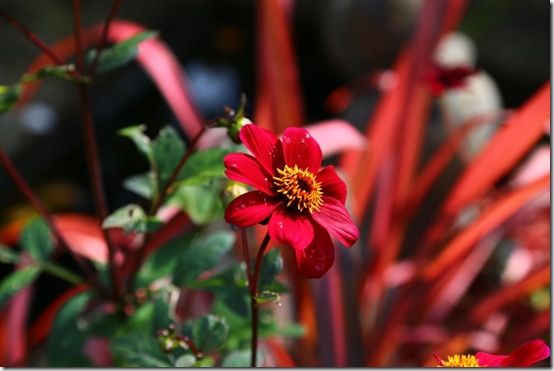 My dahlias have been late to get going this year, probably because I was very late planting them. They are now providing some really valuable late colour and I hope they will last a couple more weeks before the frost cuts them down. I love the dark ruby ‘Bishop of Auckland’. I have a number in the border and a large one in a pot on the terrace. Its single blooms have been shining against the blazing fall foliage of Acer palmatum ‘Fireglow’ and Phormium ‘Evening Glow’. 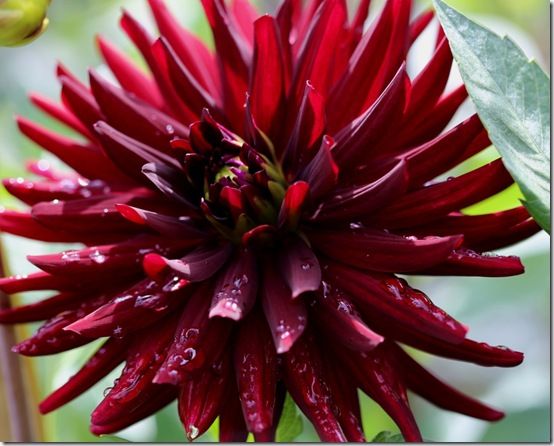 I never did get around to planting Dahlia ‘Chat Noir’, a lovely deep burgundy-black cactus dahlia. We have three black cats, and one rather bad tempered grey one. Therefore this particular dahlia seems rather appropriate for this garden (sorry grey cat!). It’s definitely on the list for next year. 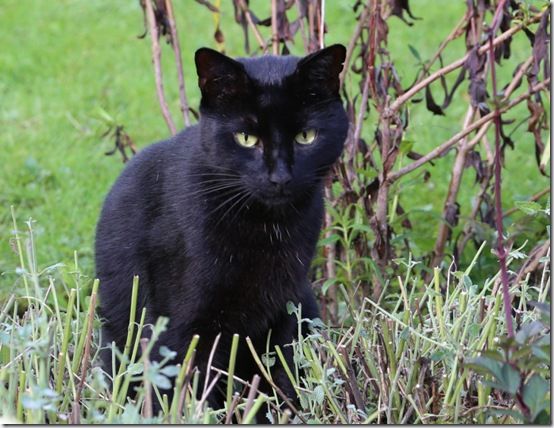 As Halloween approaches, our black cats get more mischievous than ever. They spent the weekend chasing leaves around the garden and hiding in ambush amongst the grasses. Of course we know that any association between black cats, witchcraft and the dark side is only superstition. However I rather wish I hadn’t tempted providence by cutting back the nepeta. This is Feral’s favourite plant and his face shows his displeasure. Think we might go for treat rather than trick to be on the safe side. 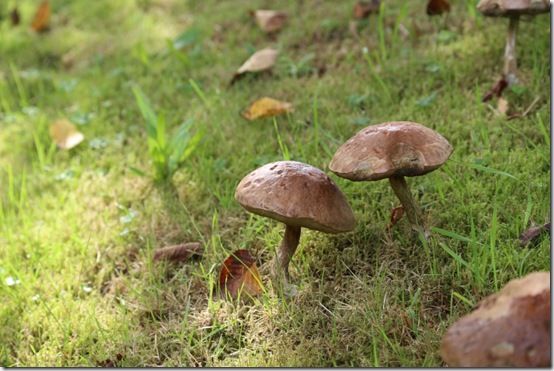