I thought it was about time I told you about my own garden, Sandhill Farm. At this time of the year we often welcome groups of visitors to the garden; usually gardening clubs and horticultural societies I’ve spoken to during the course of the year. I spend a lot of time talking about the garden so I thought I would share it with you. 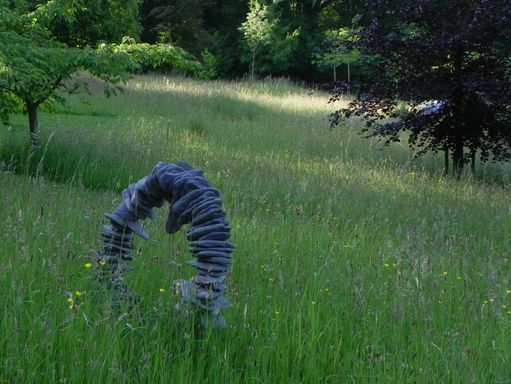 I’m sure like many of you my wife and I spend masses of time working in the garden without really looking at it and thinking about how its grown and developed. That’s one of the reasons we really enjoy sharing our garden. It makes us think of it in a different light and gives us the opportunity to look at it and enjoy it.

Sandhill Farm is located in the central south of England, on the edge of the village of Sherfield English, Hampshire. Four miles from the town of Romsey, and fifteen from the port of Southampton, it is close to the famous River Test, between the cathedral cities of Winchester and Salisbury. The garden is around two acres in area, on a North-East facing slope. Mature oak, birch and ash trees frame the site along the top of the slope and the far boundary. A tall, broad mixed hedge of hazel, holly and hawthorn marks the lower boundary.

The soil is neutral to acid, mostly sand and gravel with some clay in areas. It is well-drained and low in fertility. The ground is easy to cultivate but needs the addition of plenty of organic manure and slow release fertiliser to create good growing conditions. 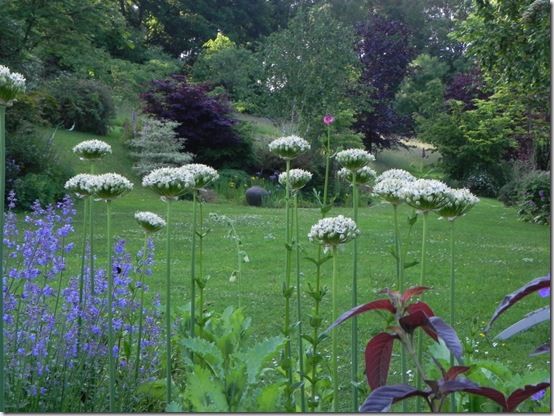 When my wife, Ros and I bought Sandhill Farm a little over twelve years ago most of the plot had never been cultivated; there was just some rather overgrown planting near to the house. We started with a blank canvas. The garden slopes upwards from the house, and so is very visible from most rooms, especially the bedrooms and the conservatory. Because of the lie of the land, and framework of the mature trees around the boundary we decided to treat the main part of the garden as one big picture, with smaller areas of interest off to the sides; these would be discovered on exploration. The alternative would have been to divide the site into a series of “rooms” but this would mean that we lost the scale and perspective that the whole garden panorama creates. The setting is rural so it has been important to create a naturalistic design that flows with the lie of the land. We have selected plants that work in a rural setting; some cultivated garden plants can look out of place here.

There was never a master plan of this garden on paper. As all of the work has been done by us, construction, planting and maintenance, the design has evolved gradually. When we bought the property an area of the slope had already been levelled to create a lawn and some retaining walls had been built. We decided to retain what had been done and make it work with good planting.

The addition of the conservatory as an extension to the kitchen influenced the main vista up the garden and layout of the terrace. The garden is now in its thirteenth year and it is starting to mature. 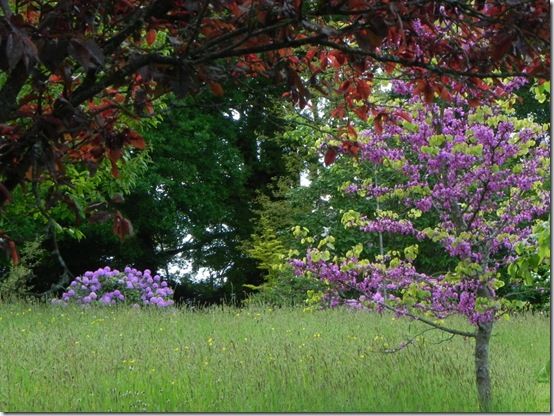 We started by planting a few trees and some larger shrubs such as rhododendrons, photinia and ilex to create a structure to work to. Our previous garden was much smaller and it took time to adapt to working in a larger space. Initially we tended to plant around the edges; however the garden really came to life when we started to create planting areas further into the centre of the picture. The addition of the large informal pond and rock bank created the focal point in the centre of the picture that the garden needed; it also gave the garden more depth. 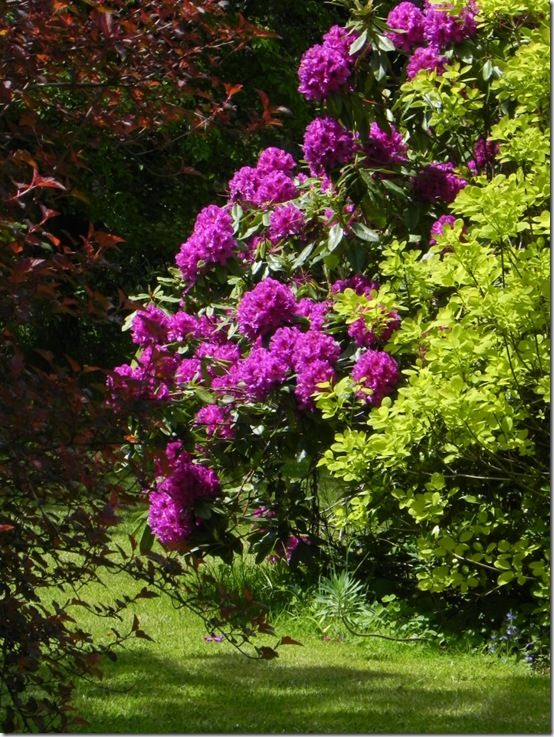 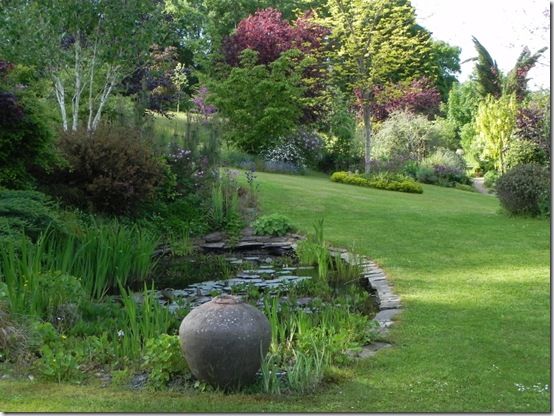 Even in a large garden like this it is easy to make the planting areas too small and to underestimate the space needed by plants as they grow and mature. To reduce maintenance we often plant a tree and two or three large shrubs into circles cut in the grass; we then create a bed around them once they are established. This avoided having too many planting areas to maintain at the same time.

The grass at Sandhill Farm had not been cut regularly for many years. Consequently the majority of the meadow was left to grow and would fall back to the ground at the end of the year and rot down into the soil. This increased the fertility, and consequently the grass grew lush and coarse. Few meadow flowers grow in this situation as they need low fertility and less competition from the grasses. We started a regime of cutting the meadow in late summer and removing all the cut grass; this we compost or burn. We then cut the meadow two or three times during winter and early spring and then allow it to grow. We maintain mown paths through the meadow; these follow the contours of the slope and lead the visitor to explore the upper reaches of the garden.

The result is that we now have a wonderful wildflower meadow. As soil fertility dropped more and more species appeared naturally including clovers, vetches, mallows and three species of wild orchids. The meadow attracts many pollinating insects and masses of butterflies during the summer. 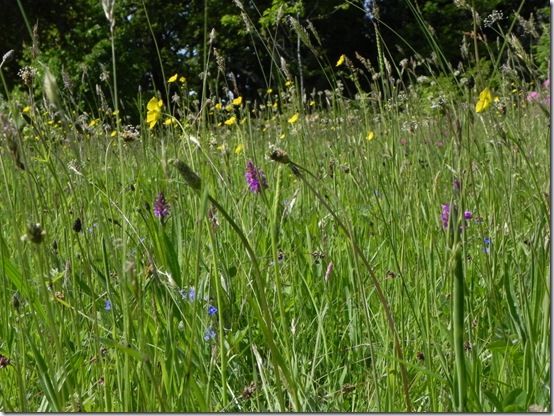 The area immediately outside the conservatory is our main outdoor seating area. This was originally an area of rough grass surrounded by a retaining wall that had been built when the house was extended several years before we bought it. I constructed the terrace as a split level area. The main paved area is slightly raised and surrounded by a rill of gently bubbling water. The low retaining wall is made of timber railway sleepers. The lower area that joins the conservatory with the raised terrace is compacted gravel with random areas of paving stones in various sizes. Using different sizes of paving, combining it with gravel, and breaking up the area with water softens the area and helps it to integrate into the informal atmosphere of the garden.

In this area and around the house we use many planted containers with a variety of small trees, evegreen shrubs and perennials and some seasonal planting. Again these help to soften the harder elements of the garden and maintain seasonal interest close to the house. By using mostly permanently planted containers, and some planted with seasonal subjects such as spring flowering bulbs and summer bedding, planting combinations can be created and changed just by moving the pots around.

Because the terrace is 1 metre (3ft) or so below the next level of the garden it has a secluded atmosphere. The hard lines of the wall have been softened with planting. Grasses, perennials and low shrubs in shades of blue, purple and lilac blend well with the surrounding landscape. This planting in the foreground as you look from the terrace towards the garden provides that foreground interest that is so important in creating perspective. At the time of writing geraniums and Allium nigrum provide the light height we look through to the garden through. 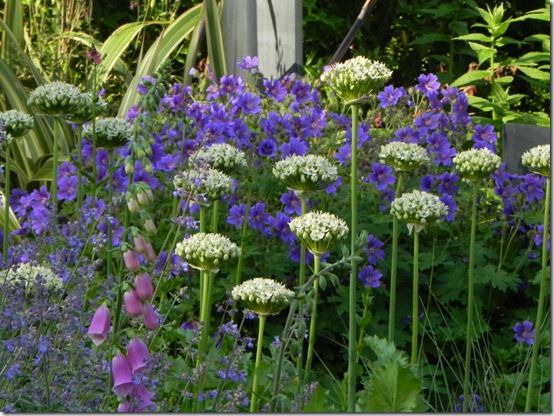 We have planted for colour and interest in all seasons. In winter the Himalayan birches, Betula utilis var. jacquemontii are particularly prominent with their creamy white bark. However the most striking plant in winter is the red-barked dogwood Cornus sanguinea ‘Midwinter Fire’. This positively glows from the time the leaves turn to gold in autumn. These fall to reveal flame coloured winter stems that remain colourful until they are cut back in late spring. 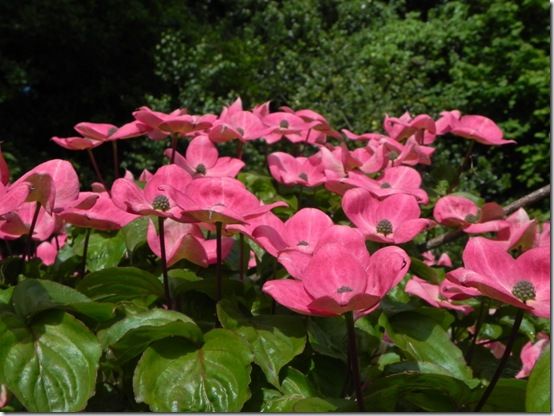 In early summer when we welcome groups of visitors to the garden the Cornus ‘Porlock’ and Cornus kousa are at their best at that time. These wonderful small spreading trees are smothered in large creamy white bracts which eventually blush pink as they mature. Philadelpus, early hydrangeas, roses and a variety of perennials fill the beds with colour at the same time and the meadow is also at its most floriferous. 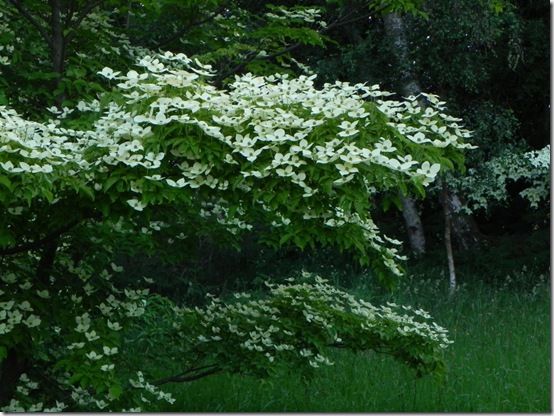 We love our sown “drifters”: Nigella damascena, Papaver somniferum, digitalis and oenother reliably seed themselves in our sandy soil and contribute to the summer picture. Alliums do particularly well here. I love the honey garlic, Nectaroscordum (formerly Allium) siculum. This is flowering brilliantly this year and is just dripping with bees all day and all evening.

Mid summer is often the dullest season in gardens after the exuberance of early summer. I am a great believer in the importance of foliage colour to maintain the interest through the seasons. Golden, silver, variegated and purple foliage really holds the planting scheme together throughout the year.

We have planted both trees and shrubs for autumn colour: Liquidambar styraciflua, Parrotia persica, Cotinus ‘Grace’, Euonymus alatus to name but a few. Crocosmias, dahlias, echinaceas and rudbekias come into their own in the lower layer of the planting picture.

What makes the planting work

In all planting areas we have a mixture of shrubs and perennials with tall shrubs or trees for height to make the effect three dimensional. I believe this is essential for effective planting – you must create interest at all levels, not just close to the ground.

I also think that colour balance is very important. Yellow and white draw the eye, so you must either use them as a focal point to draw attention to a feature, or you must balance them throughout the planting picture. This is also true of dark foliage. If you have a purple leaved tree or shrub on one side of the garden it is best to balance it with one on the other side. It need not be at the same level in the picture, but in needs to create a balanced effect. 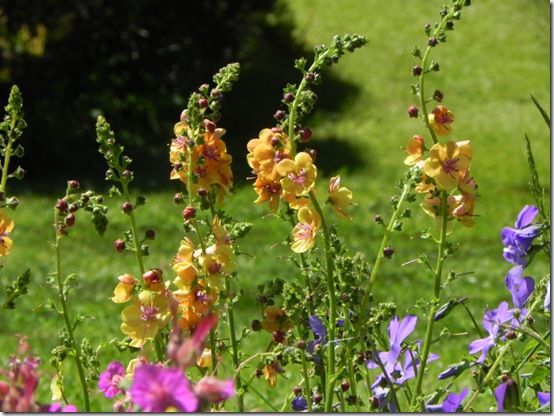 Repeating the use of a plant in the garden also helps to create a unified picture. Too many different varieties in a planting scheme can create a disjointed effect.

The predominant colours in our garden are greys, blues, pinks, reds and purples. We have a generous sprinkling of white and an area of yellow planting near to the house. The colour scheme in our garden has been led by the flowers in the landscape so that the planting sits happily in its setting. Choosing plants that are appropriate to the setting is essential for a planting scheme to work. 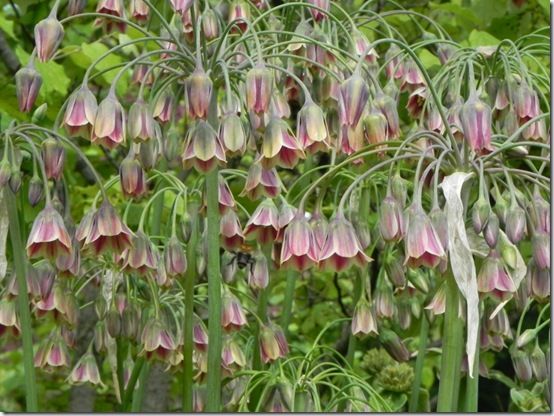 Finally I think the most important factor when choosing a plant is to select one that succeeds in the situation. Never dismiss plants because they are widely used and familiar – choose every plant on what it contributes to the planting scheme.

Well that’s a bit about my garden. I’d love to know something about yours. If you would like to share your garden with other readers then get in touch. Also do post your comments and let us know what you’ve learnt along the way in tending your plot. That’s how we all learn – from the experiences of fellow gardeners.