I recently visited The Laskett, the garden made by Sir Roy Strong and his late wife Julia Trevelyan Oman. With her background as set designer for opera, theatre, television and film, and his as a historian, Director of the V&A and The National Portrait Gallery, the garden is needless to say theatrical; a tapestry of their lives. The Laskett is mindblowing, complex, intricate, ornate, charming and surprising. 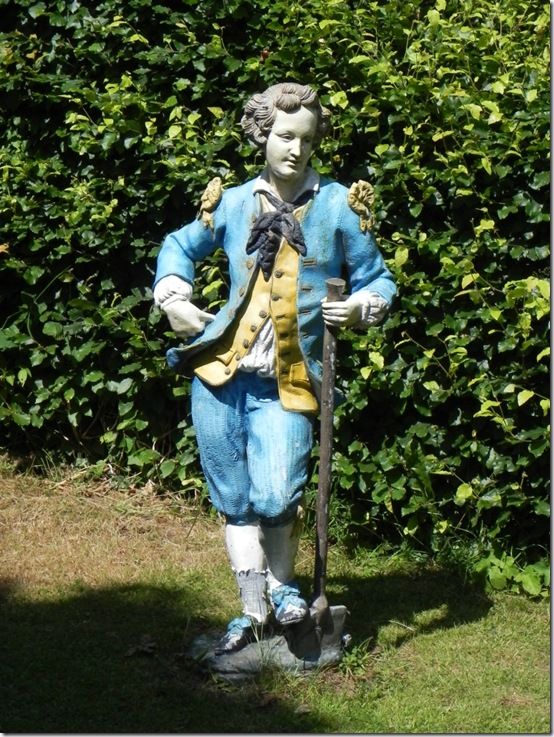 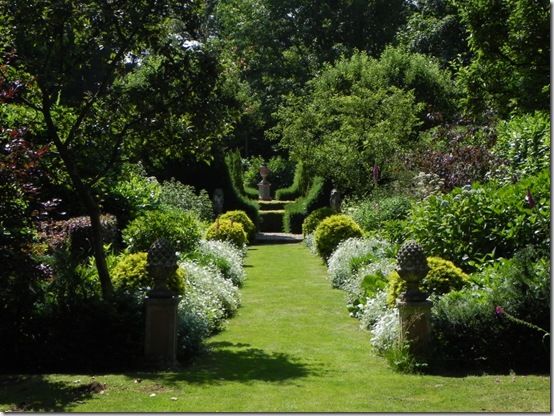 On arrival Sir Roy’s charming P.A. informed us that Sir Roy would appear at 10.30a.m to say a few words of introduction. We waited in anticipation and at 10.30 he appeared dressed in white linen crowned with broad-brimmed panama. He is clearly fit and bright eyed for a man of 78 and has immense presence. His welcome is warm and sincere and he introduces us to the garden that he and his late wife made together. We immediately feel a connection; the personal importance of this real garden. We feel honoured that he wants us to understand it and share it 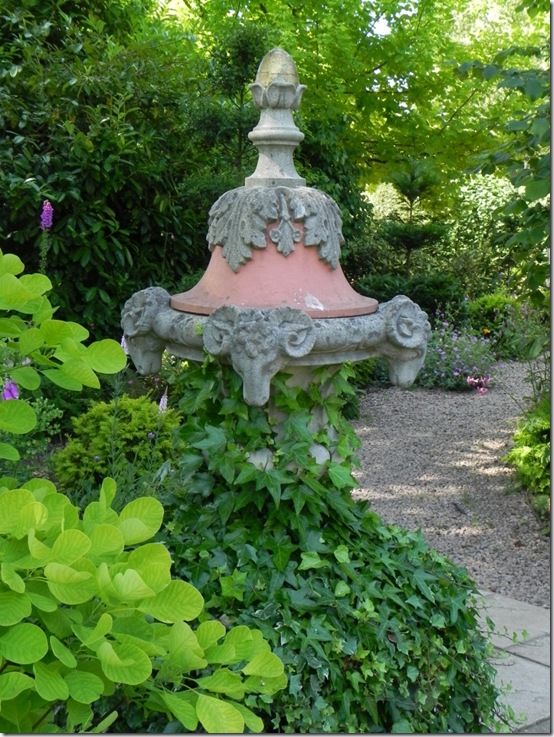 He tells us a little about the influences upon the garden. The initial design is influenced by Lawrence Johnston’s Hidcote Manor; “It is a garden of rooms”; in his own words. The classical designs of Italy are a strong influence, as are opera and the theatre. We already love the garden and hang on his every word. He then introduces some of the practicalities; challenges and influences all of us gardeners relate to. The severe weather often heading in that direction from the mountains of Wales: frost, rain and wind. How budget influenced early design decisions. Plants made the garden, they were relatively cheap. The pathways, structures and statuary came later. 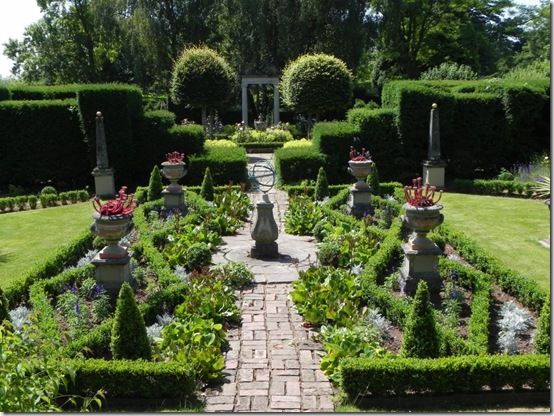 I found myself nodding in agreement. I have always believed that plants should be the fabric of a garden and that the hard landscaping elements are of secondary importance. Later, on exploring the garden, I would discover quite utilitarian paving, some very basic construction and some wonderful improvisation; none of it detracting in any way from the overall effect; in fact none of it even obvious to the visitor. It is reassuring that hard landscaping can’t predominate in a garden based on vegetable masonry. 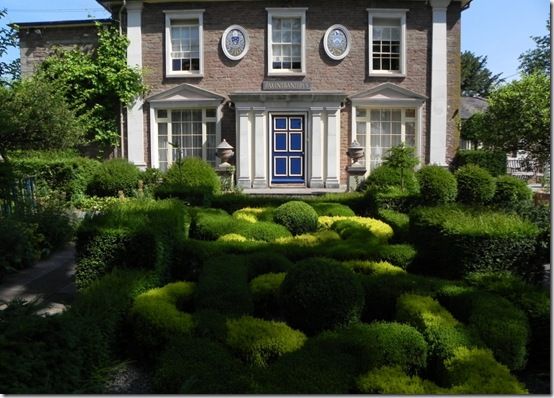 Sir Roy makes the point that foliage and plant structure create a garden and that flowers are just the embroidery. My point of view exactly; despite the fact that our gardens are poles apart in scale, style and size. We visited the Laskett on a gloriously sunny midsummer day when the roses were in bloom. However flowers were in the minority and leaves led the way. I found myself longing to see the garden on a frosty winter’s day, or in early spring when evergreens still predominate, but a sprinkling of flowers embroider the ground. 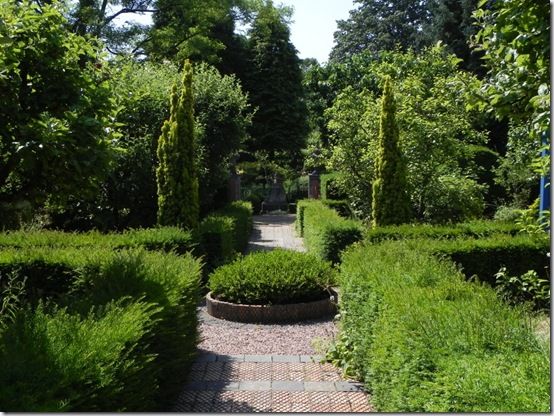 Obviously the loss of his wife was a devastating blow; it must be difficult to change anything in a garden you created together. His philosophy is totally inspiring: “you need to go on and build a new life”. As part of that process he “edited the garden”. As he said “Gardens need to progress; they cannot stand still”. He took out some of the tall hedges, let in more light and removed anything that looked wrong. His radical approach is so refreshing. Gardeners have the dreadful habit of hanging on to plants that are past their sell-by-date; subjects that no longer enhance the garden. As he says: “get rid of it, and start again”. 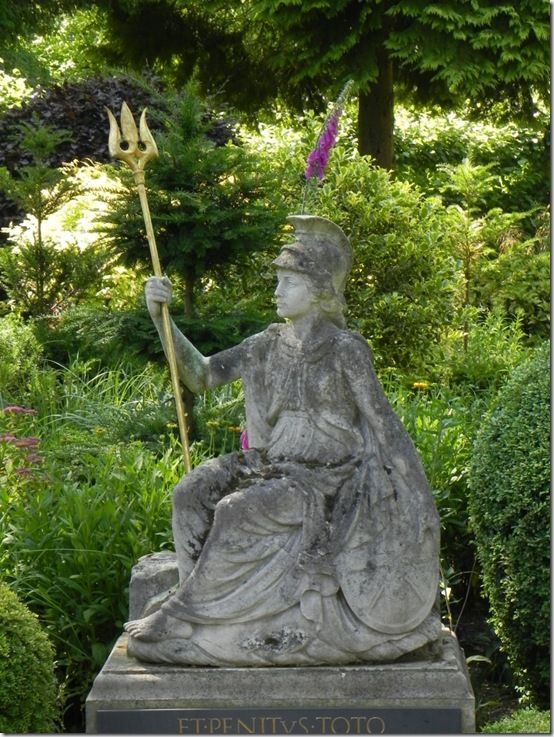 His approach is to “chop it back whenever you notice something needs sorting”. Gardeners are often too afraid to do something if it’s the wrong time of the year. I am the last one to encourage indiscriminate hatchet pruning, which often results in crimes against horticulture. However busy people do have to do things when they have time to do them; ‘seize the moment’ is often the only way to achieve a result. 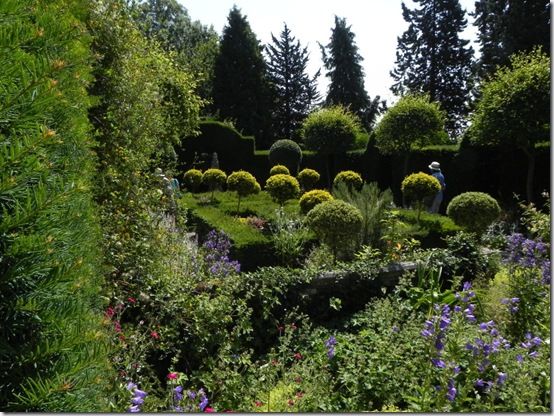 Sir Roy’s introduction set the scene for a wonderfully enjoyable and inspirational visit to a garden which retains its memories of the past, but looks to the future. New areas are still being added and modifications are being made, regardless of extremity. The garden is constantly under the scrutiny of its owner and the gardeners who strive to maintain it to the highest standards. What seems like miles of yew hedging and topiary of yew, box, euonymus and ilex present a monumental maintenance task in terms of trimming. The complex structure of lawns, paths, beds and borders cannot be easy but somehow they achieve outstanding results. 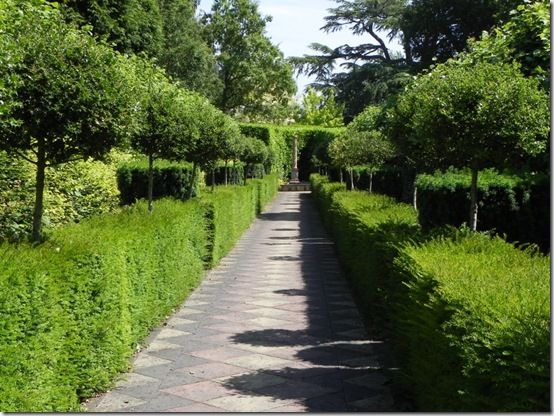 Before the visit I was expecting an amazing garden, but one which was perhaps at arm’s length; a little impersonal, a little too sophisticated. I was expecting Sir Roy Strong to be opinionated, outspoken and perhaps aloof. I found a garden that was personal, tangible and one that wears its heart on its sleeve. I found an owner that was opinionated, wise, warm and keen to share something that is such an important part of his life, past and present. Thank you Sir Roy Strong.

The Laskett Garden, Much Birch, Herefordshire is the largest private garden to be created in the UK since 1945. It is open to groups via appointment only. Visit the website http://www.thelaskettgardens.co.uk/