Who’d have thought anyone would ever consider pictures taken with a mobile phone a serious art. But take a look at the growing number of ‘iphoneographers’ who are emerging and you may well change your mind. There are even websites dedicated to it (check out iphoneographycentral and iphoneography), and flickr groups gaining members in their thousands (see amazing iphoneography).  One particular artist who stands out is Emmy award-winning multimedia journalist Richard Koci Hernandez.


In one of Richard’s projects (above) he gave himself 54 Days to shoot 54 images on his daily ride on the 54 bus in Oakland. Everything was produced using his iPhone - including images, music and titles. He used these iPhone apps: CameraBag, Melodica, Brushes and Banner.  As part of the Blurb, "Your Stories" series, Richard takes us to downtown San Francisco, to show us where he got the inspiration for, and explains the role of Blurb in creating in his Instagram iPhoneography book.

A couple of points Richard makes that standout when advising on iphoneography are:

1. Follow the good light. Study the light. And don't leave that good light. Light can make or break your photograph.

2. Develop a style.  It's sort of like finding your voice as a writer. Be bold, do your own thing and standout. Anyone can learn the technical aspects of using a camera, but in the end, it all boils down to having a good eye and being receptive to your surroundings.

As part of the Blurb, "Your Stories" series, Richard takes us to downtown San Francisco, to show us where he got the inspiration for, and explains the role of Blurb in creating in his Instagram iPhoneography book.


Street photography and Instagram photobooks by @koci from Blurb Books on Vimeo.

Perhaps this a good illustration, as pointed out by one of Richard’s Vimeo followers, of how a great artist can take and capture moments with anything you hand them weather it’s a digital camera, disposal camera or even a camera phone.  If you’re interested in iPhoneography – Flickr is a good place to look for inspiration. All of the iphoneography art photos shown here are self-catagorised as art iphoneography. 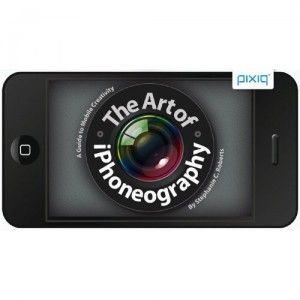 If you are new owner of an iPhone you may be unaware of the potential it has when it comes to photography. The Art Of iPhoneography helps with a mix of advice on apps, tips to spark creativity, what to shoot, examples of work from nine iPhoneographers, communities to join and a list of resources.

The author, Stephanie C. Roberts, is an award winning documentary photographer and uses the power of iPhoneography as a creative and mobile method of visual documentary.  The book is in the shape of an iPhone and overall is well laid out into seven chapters with plenty of images, showing both the iPhone in use and example images. Although it is a book which can easily be read in an afternoon it gives plenty of information and you'll soon be downloading new apps and trying some of the tasks the book sets.