Plants, people, and reflections on the wonderful world of horticulture

I thought every so often I would treat you to a rather more random post about my sojourns and encounters in the wonderful world of horticulture. Really it’s a bit of a treat for me too, an indulgence, a guilty pleasure.  Those that know me know that there is nothing I like better than talking plants, gardens, ideas and views horticultural.  There are plenty that I want to share with you, and I hope that you’ll feel free to chip in and share your ideas and opinions. 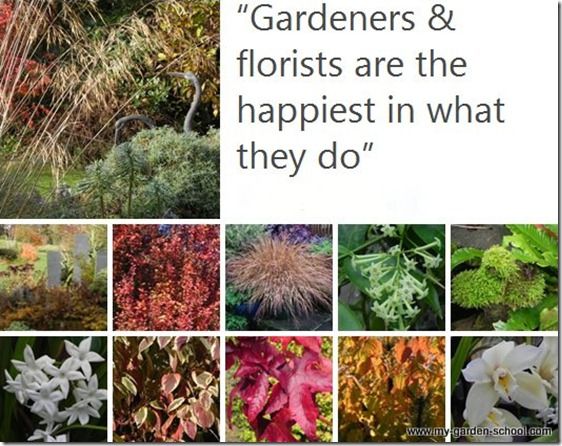 One of last week’s highlights was an article that reported that research shows that gardeners and florists are the happiest and most contented in what they do. Not rocket science but somewhat reassuring; there’s nothing like a report like that to make you feel smug!  As you know it’s a topic close to my heart; hence my recent post: ‘Horticulture: a career to be proud of’. I love plants, love gardening and love gardening folk; basically I just love being around plant material, and appreciate nearly all aspects of the horticultural world.  I could happily have worked in the cut flower trade; my forays into the world of flowers have left me passionate about putting the shapes and colours together to create a pleasing picture. 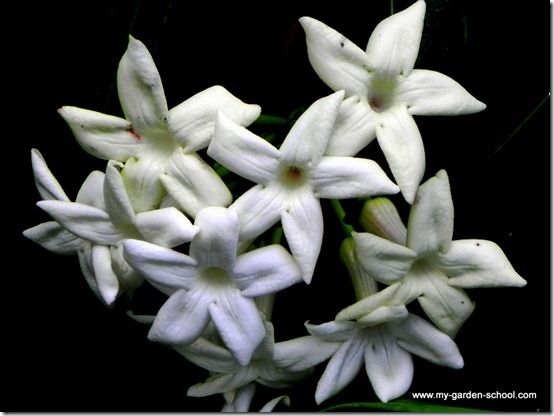 It’s funny how the scent of a particular flower recalls a certain event or time of your life.  The stephanotis in bloom in our conservatory at the moment always reminds me of my early days working as a Saturday boy in a florist’s.  The bags of stephanotis “pips” were regarded as a treasured commodity; an essential ingredient in any bride’s hand shower. If the “steph” went black it was a disaster beyond your imagination.  Like many white flowers mine tends to develop black spots at this time of year in the cool damp atmosphere of the conservatory. The sight of those time black spots on white petals still sends a shiver down my spine! 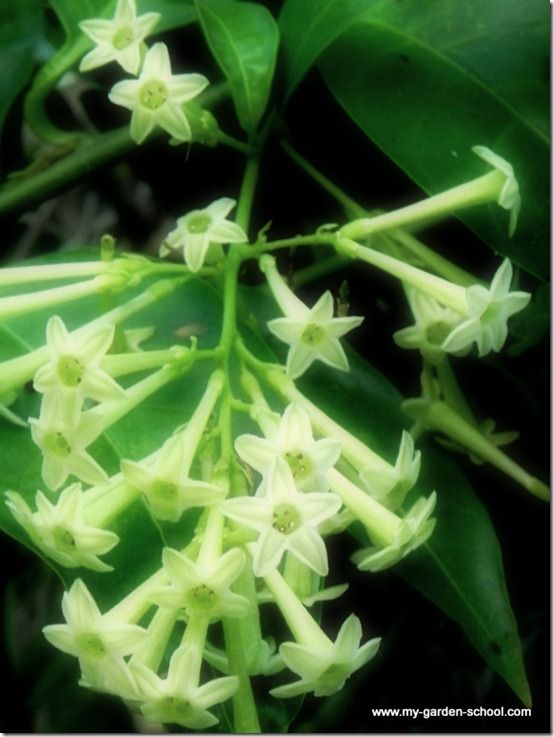 The other fragrance in there at the moment comes from ‘Queen of the Night’, Cestrum nocturnum.  This unprepossessing plant, with its straggling growth and tiny green flowers, omits the most powerful bewitching fragrance at night. One whiff and I’m in Kas or Marrakesh; sweet, spicy, pungent; the best of Jo Malone, but sadly struggling with the cold.

The lemon is relieved to be indoors for the winter, even if it’s looking a bit yellow in the leaves. There are embryo fruits though, which promise fragrant, unwaxed lemons, the reason to tolerate the vagaries of this flippant plant.  Think I’ll blog about lemons in a week or two; I know a few people that need reassuring. 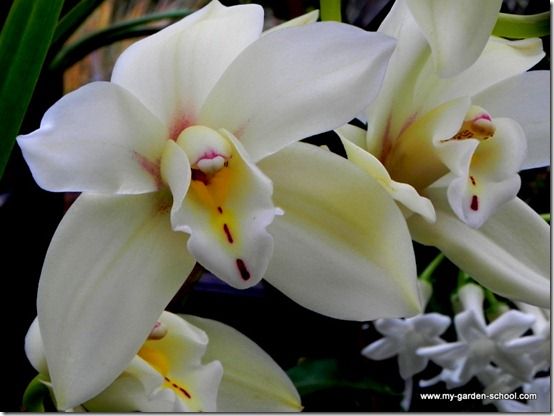 The first cymbidiums are already in bloom. As I said in a previous post these are passions of mine, despite the fact that they are some of the ugliest plants on the planet, but with the most exquisite flowers.  The surrounding garden makes them, and all the other rather random plants in the conservatory, tolerable.  It’s never struck me before how these indoor characters work because of the colour, structure and combinations in the surrounding garden. As we virtually live in the conservatory thoughout the year the views of the garden and plants therein are under constant scrutiny. 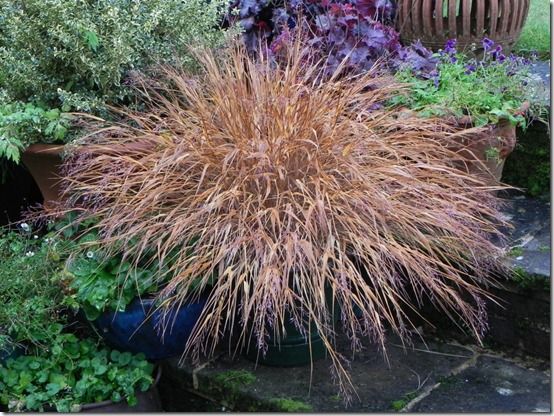 The autumn colour of fall foliage has been spectacular this year, and the wet summer and autumn has produced unusual shades.  The Hakenochloa macra ‘Aurea’ in a pot on the steps usually turns from yellow to parchment.  This year it’s a more woody colour; tan like the beech leaves and very beautiful.  Cornus ‘Midwinter Fire’ normally colours well in autumn, but this year even the variegated Cornus ‘Hedgrow’s Gold’ is displaying the most extraordinary shades. Just outside the conservatory door, on the shady steps, the growth of moss and tongue ferns is extraordinarily vivid, it could outshine any emerald. 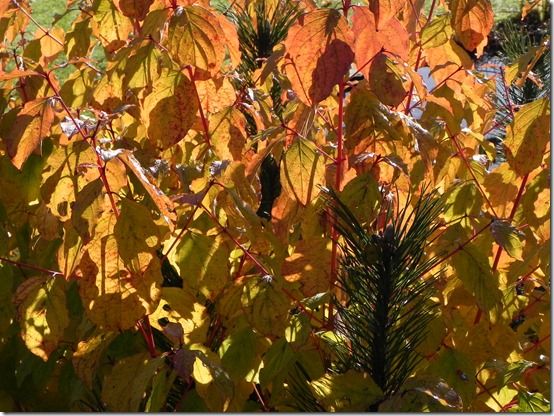 Most of the red shades have passed, however the liquidambars are glowing everywhere.  I was in the New Forest during the week and they were burning deep scarlet in many gardens on the acid, peaty soil.  In my garden Liquidambar ‘Worplesden’ has now dropped its flaming mantle, but ‘Lane Roberts’ is at its best.  In the distance of the garden view this is a miserable little specimen that’s had a difficult start in life.  I believe it is the offspring of a fine tree that is no longer in the Sir Harold Hillier Gardens.  Up until this year it has shown no intention of thriving here, but is suddenly underway and to prove it has hung onto its leaves and developed an amazing crimson hue. 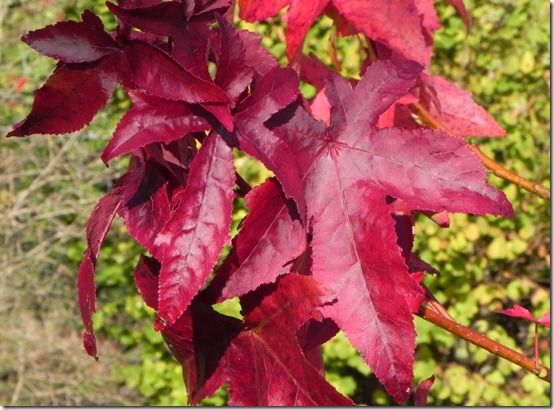 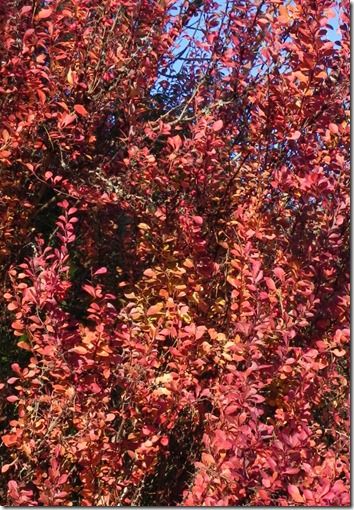 Similarly spectacular shades have developed in the leaves of Berberis thunbergii ‘Helmond Pillar’. This is a rather sprawling specimen in need of a little formative pruning that has been rewarded with neglect beneath out large pine tree.  Although the colour has been lack lustre throughout the summer, it is now on fire and has totally redeemed itself.

I must say that I am pleased with my slate monoliths that I finally put into place last summer.  These are a bit of Chelsea Flower Show that made its way back to my garden. They are to one side of our main vista from the conservatory and although I say it myself they do frame the view rather well.  They took two years to get this far, but at least they are roughly in position.

A friend called round this morning that had not seen the garden previously.  She’s clearly not a gardener; you can always tell.  When she walked into the conservatory she exclaimed, “What a beautiful garden. I bet you have wonderful barbecues. What a lovely spot to sit and relax”.  I just smiled and nodded, resisting the temptation to point out that if you have a garden you rarely sit in it, you garden! I was tempted to invite her to spend the afternoon raking leaves, but sadly she was off to have lunch with friends. As I said to my wife: “That just goes to prove that gardener’s are the happiest people”. She did not reply............... 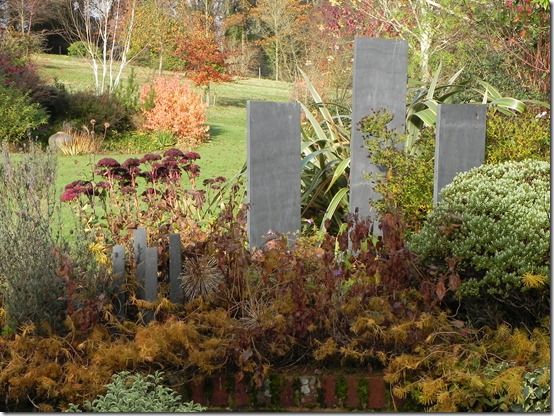 So you’ve heard a little about my garden views, what catches your eye when you gaze upon the garden from the window? I would love to hear about your favourite plants, garden objects or what you would like to change. Let’s share our thoughts. I often think that I could be very happy working on maintaining a large garden; my only concern would be lack of people to talk to. You see I do like to share my experiences. I hope you do too.