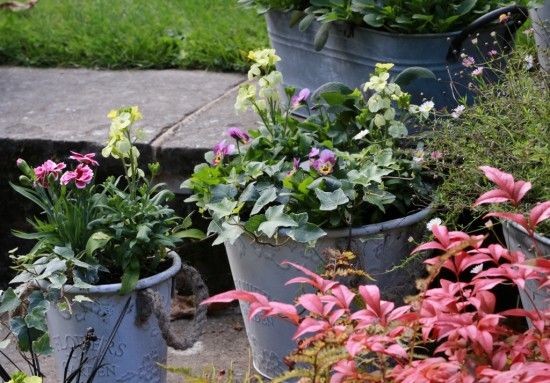 As summer seasonal bedding plants run out of steam and we start to think about planting spring flowering bulbs, there is no greater fillip for the patio than a few flowers which will liven up the scene through autumn, winter and perhaps into spring. Those that leave pots and containers empty, or filled with the forlorn remains of summer bedding, are missing a wonderful season of colour, or even two or three seasons that can be every bit as important as those summer months. 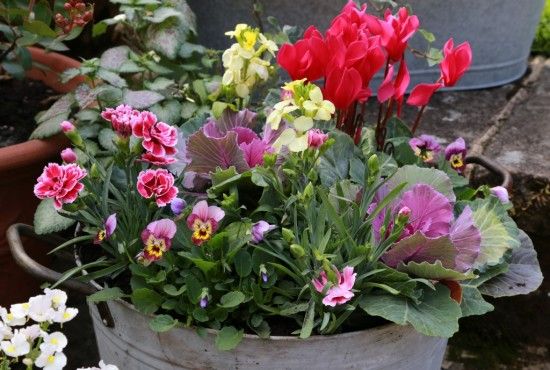 Cyclamen start to bloom profusely from late summer onwards. The hybrid cyclamen were considered as winter pot plants a few years ago. Selective breeding has developed small, tougher varieties that are able to withstand colder temperatures and even a degree or two of frost.  Often promoted as hardy, in my experience they are damaged by cold wet weather, but are ideal for window boxes, balconies, porches and any situation with a little more shelter. Removing faded flowerstems or any growth that becomes soft and mushy is essential to keep them going. Don’t cut; remove with a sharp tug.  This year I’m trying a new variety called Tianis which is a little larger than most of the other “Mini” varieties, such as Miracle. It is however very graceful and comes in lovely, rich colours.

Ornamental cabbages were incredibly popular a few years ago. I mentioned them recently in the context of cut flowers, where they seem to have found more of a long-term home.  I do like them in containers where they work with the other colours and textures in the scheme, but I never expect too much from them.  They normally go through fall and early winter, then decline. They look best as individuals and in my opinion are definitely container subjects and best kept away from beds and borders. Avoid them if you have a problem with pheasants, rabbits or pigeons; they love them! 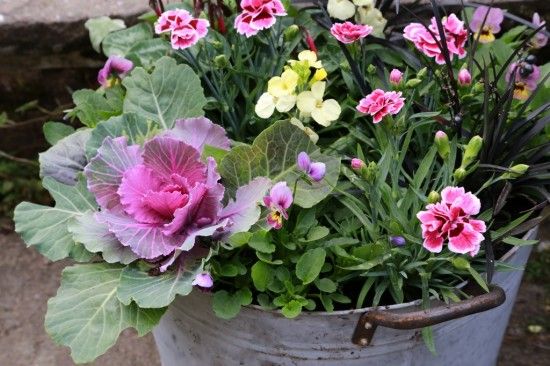 Talking brassicas I must mention wallflowers. I’m used to seeing these spring flowering biennials sold as wilted bunches of field grown plants sold bare root for planting in fall to flower in spring. They need an open, sunny situation and are at their best with some shelter. As members of the cabbage family they are affected by club-root disease, so many struggle to grow them. I love their simplicity, scent and old-fashioned appeal so I am particularly pleased to find “SugarRush”, a new compact variety that blooms in autumn and spring and is ideal for pots and containers.  You buy it as a cell-grown or pot-grown plant in bloom and it packs instant appeal.  I used a few SugarRush Bronze to liven up my pots containing Euphorbia ‘Ascot Rainbow’ and Heucherella ‘Brass Lantern’. These had orange begonias in them for a splash of summer colour so I’ve removed those and replaced with the wallflowers. 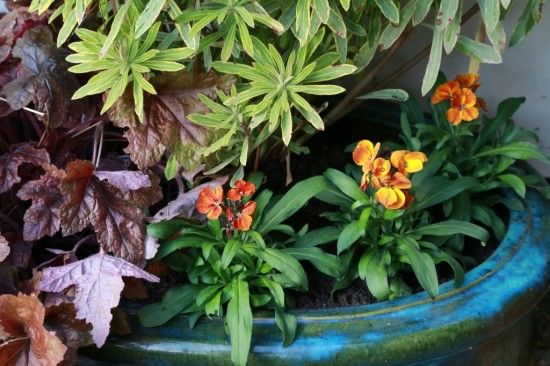 I also used Wallflower (Cheiranthus) Sugar Rush Primrose in some light blue=green glazed pots with the lovely Viola Endurio Sky Martien Light Blue. This is a superb winter blooming viola with a semi-trailing habit and heavenly sky-blue flowers. It is remarkably free flowering and in my experience even flowers in cold, frosty weather when most types of pansy and viola take a break. 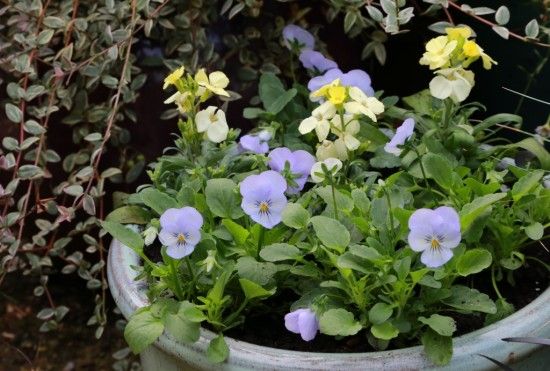 Although this sky blue viola is a superb mixer it also looks great on its own. A simple galvanised container with five plants has such presence and just a week since taking this picture soon after planting the violas have already filled the pot and are blooming more freely. Pansies and violas do not like warm autumn weather, particularly if night temperatures remain fairly high.  They like lots of light and as soon as days and nights have a chill in the air the buds really start to form.  Soon after planting it is worth applying a liquid tomato or other high potash fertiliser. The potash helps to harden the plants and prepare them for colder weather to come. 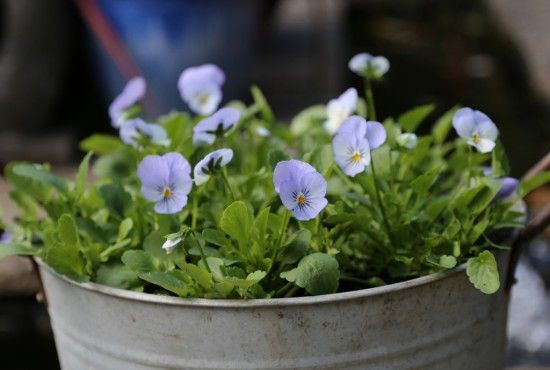 Dianthus ‘Sunflor’ has been around for a few years. This dwarf dianthus has blue-green foliage and stout stems carrying semi-double or double flowers in a range of pastel and rich colours. I particularly like varieties with laced or patterned blooms and all have the bonus of a strong fragrance. The flowers are long lasting and appear over a long period.  They are cold and weather resistant and the plants overwinter and bloom again through spring; great value. I have had plants that have lasted for a number of seasons if they are in a sunny spot and do not become swamped by their neighbours. 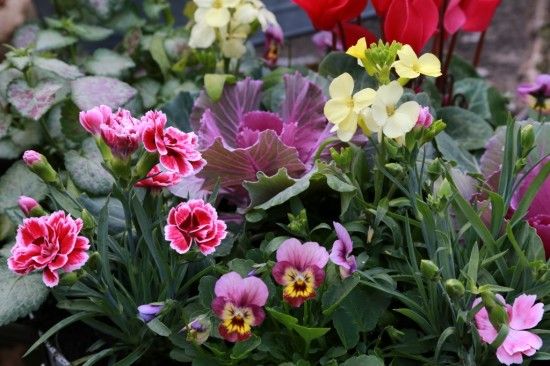 Of course there are plenty of foliage plants that you can use in winter containers including evergreen ferns, grasses and herbs.  Look out for coloured sages, thymes, santolina and helichrysum. Winter heathers also make brilliant long-term plants for pots. One little shrub that I have become a great fan of is the dwarf sacred bamboo, Nandina ‘Obsession’. The colour on the upper foliage is already superb. I have one plant in a large terracotta pan, it is actually the base of a large pot that was broken. I’ve added some bronze wallflowers and some lovely coppery-pink violas to add flower colour.  I’m always amazed what an impact a few little flowers can have if you get the colours right. 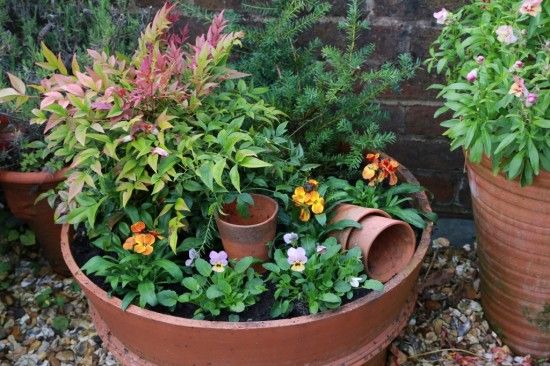 I don’t replant all of my pots for fall; many are about to be planted with spring flowering bulbs. However a few flowering and foliage subjects really lift the garden picture and add life at a time of the year when things are in danger of going to sleep. See what a difference you can make by doing the same. 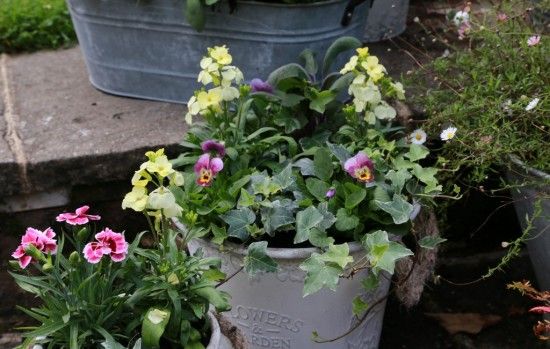