“[a] walls, either free-standing or part of a building, that is partially or completely covered with vegetation and, in some cases, soil or an inorganic growing medium.” (Wikipedia)

But this technical definition doesn’t do justice to the realities of Blanc’s vertical gardens and living walls. His green walls are transformative art pieces. Blanc states, “I gather inspiration every day from nature” which is inspiring to the rest of us who are simply not used to seeing buildings adorned with greenery with such exuberance.  Blanc uses his profound knowledge of the world’s extensive selection of plant life, particularly drawing inspiration from flora found in Thailand and Hawaii, to create patterns of colour (mostly shades of greens) on what was before dull concrete. 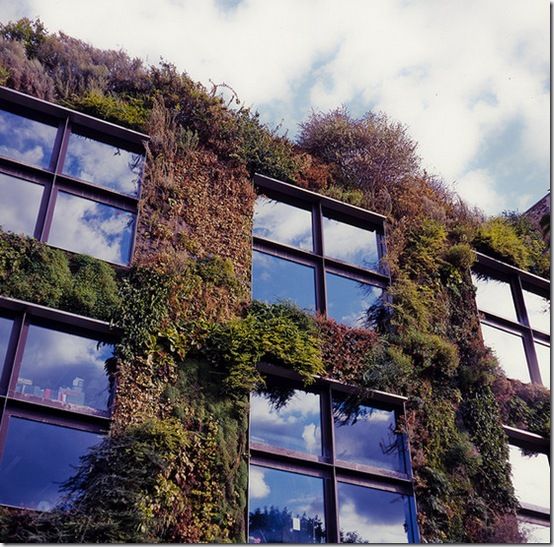 And whilst I want to believe that these incredible vertical garden art pieces, are also environmentally sound too - this is something I’m struggling with.  Especially when observing some of the recent rash of copycat walls emerging in highly populated cities across the globe from London to Dubai.  Whilst Patrick uses his expertise and deeply ingrained knowledge of tropical plantings to adorn walls as if they were rock faces; many more recent city walls do not replicate Blanc’s environmental philosophy and don’t stick to species that would naturally thrive in the environment they are placed in. 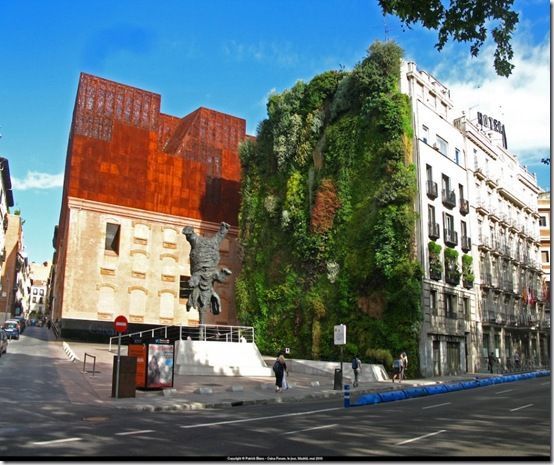 During a visit to MyGardenSchool tutor and acclaimed horticultural author Noel Kingsbury last week – we touched on the topic of green walls. Noel too expressed his concerns: “What most people don’t realise though, is these walls can be incredibly complex to install, and water intensive to maintain.” So basically if you don’t live in a warm, moist climate – your vertical wall is unlikely to look like the enticing work of Patrick Blanc, without costly irrigation systems and extensive wireframes and modular grids.

The UK, especially London, is unfortunately in my opinion a good example of where the environmental considerations are currently jarring with the aesthetic drive for more designer green walls and vertical gardens in the city. In August 2013, one of the latest of such walls appeared as London’s largest 'vertical garden' unveiled which ‘experts’ say will prevent central London from flooding. The new 'Living wall' near Victoria station contains more than 10,000 ferns and herbaceous plants. It uses storage tanks to collect rainwater and nourish the greenery. Containing more than 20 seasonal plant species including buttercups, crocuses, strawberries, spring bulbs and winter geraniums, the wall required 16 tons of soil . Theoretically, the result will be an eye-catching floral display which will help prevent flooding. What an incredible project.  I love the idea of this.   And take a look at the video below for more insight on the construction of the project.


But herein lies the issue. Whilst there is little doubt that the motives behind living walls, and vertical gardens are positive, and intended to be beneficial to the environment (including the new wall at Victoria). A similar living wall was built in Islington in 2005 but ended in disappointment after the watering system failed and all the plants died. Even at the time, critics accused the council of frittering away £100,000 of taxpayers' money on a 'green extravagance'.

Surely this use of 16 tons of soil on the Victoria station living wall, is losing sight of Patrick Banc’s philosophy of right plant right place, and has to be very high maintenance to sustain over a long period of time? Blanc’s philosophy is actually the opposite of transporting a new environment with soil and irrigation to a new wall. As a child, Blanc was already a scientist. He discovered a love for plants and aquariums and that led to him experimenting with the idea of using plants as biological filters for aquariums to extract excess nutrients. This idea was the seed from which the concept of vertical gardens grew. When he was 19 years old he visited Malaysia and Thailand and was inspired by the way plants grew on the rocks, and from that point on he wanted to bring them from nature to cities. Blanc explains that the technique he uses is truly simple, and that the key to success is using only plants which grow on rocks and don’t need soil, and using the right plants in the right place, layering according to their optimal light, water and nutrient requirements. This ‘right plant right place philosophy’ somehow seems to be getting lost in translation – especially in cities like London where the climate and conditions within the city can be harsh.  We seem to be transporting new environments to walls and creating elaborate designer support systems which are costly to maintain.  This is fine if the motive is purely for an aesthetically lush designer wall.  And it can work exceptionally well internally in buildings where you create your own microclimate. 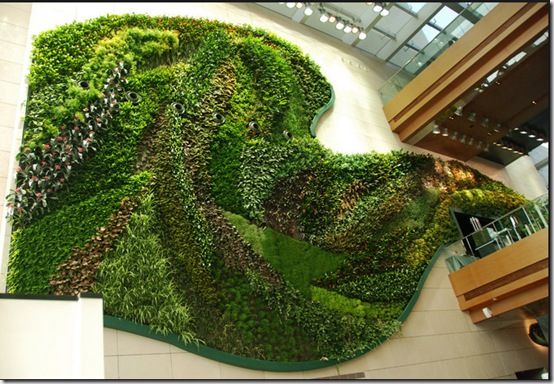 But let’s not dress it up as an environmental solution.  Surely there must be a more environmentally conscious way of creating beauty with plants for our external walls rather than transporting 16 tons of soil?

In London, the Mayor is encouraging more ‘green initiatives’ like the living wall in Victoria to make sure London can continue to compete, not only as the greenest city in Europe, but as the best big city on earth.' Big claims. Which I love the ambition for by the way.

And the Victoria project is believed to be the largest of its kind in the country – so I’m really hoping that lessons have been learned and it will have longevity and thought has been put into the maintenance and cost of the longterm plant care.

What might be more interesting, is to experiment further with native species, which can survive in the true climate and conditions of local cities, without extensive irrigation systems. They won’t look like lush tropical walls, unless you live in a lush tropical city, but they will at least be staying true to the native landscape.

Let us know what you think..

Perhaps the world’s most famous vertical garden designer is Paris-based botanist Patrick Blanc. He has been creating his stunning installations for the past 25 years and grows his gardens, which he calls “vegetal walls”, on supporting structures attached to buildings so that the plants roots do not cause damage to the original walls. Although his creations can be seen in cities as diverse as São Paulo and Singapore, some of his best-loved work is on home turf. In 2001 his remarkable interior garden helped establish Paris’s Pershing Hall hotel as an eminent address among the city’s cognoscenti. Another notable work is the lush plant covering on the Musée du Quai Branly, in the shadow of the Eiffel Tower. Designed by the world-renowned French architect, Jean Nouvel, the exterior of this building is as much a draw as the collections housed within.

Living Walls:  Back to nature

Blanc patented his concept in 1988 and says that his work is important as it reminds us to interact with nature, even within hectic urban spaces. In a recent interview with French television channel ARTE, he said: “The good thing about the walls is that, in the first place, it’s decorative, and in the second place, it has a really big impact on people because it makes them realise that nature can exist in the city.” Blanc held an exhibition of his work on show at the New York Botanical Garden and has revised and updated his book The Vertical Garden: From Nature to the City. He says he wants “to show people that there are no places where there can’t be plants”.

The actual inventor  of the Green Wall system is Stanley Hart White, a Professor of Landscape Architecture who patented a green wall system in 1938.

Your Thoughts on Living Walls Please