Key Gardens, also known as Royal Botanic Gardens, mission is to be the global resource for plant and fungal knowledge, building an understanding of the world's plants and fungi upon which all our lives depend.

Kew contains the most diverse collection of living plants of any botanic garden in the world. The collection contains plants from tropical, temperate, arid and alpine climates, and are grown out in the Gardens and in controlled conditions within glasshouses and nurseries. 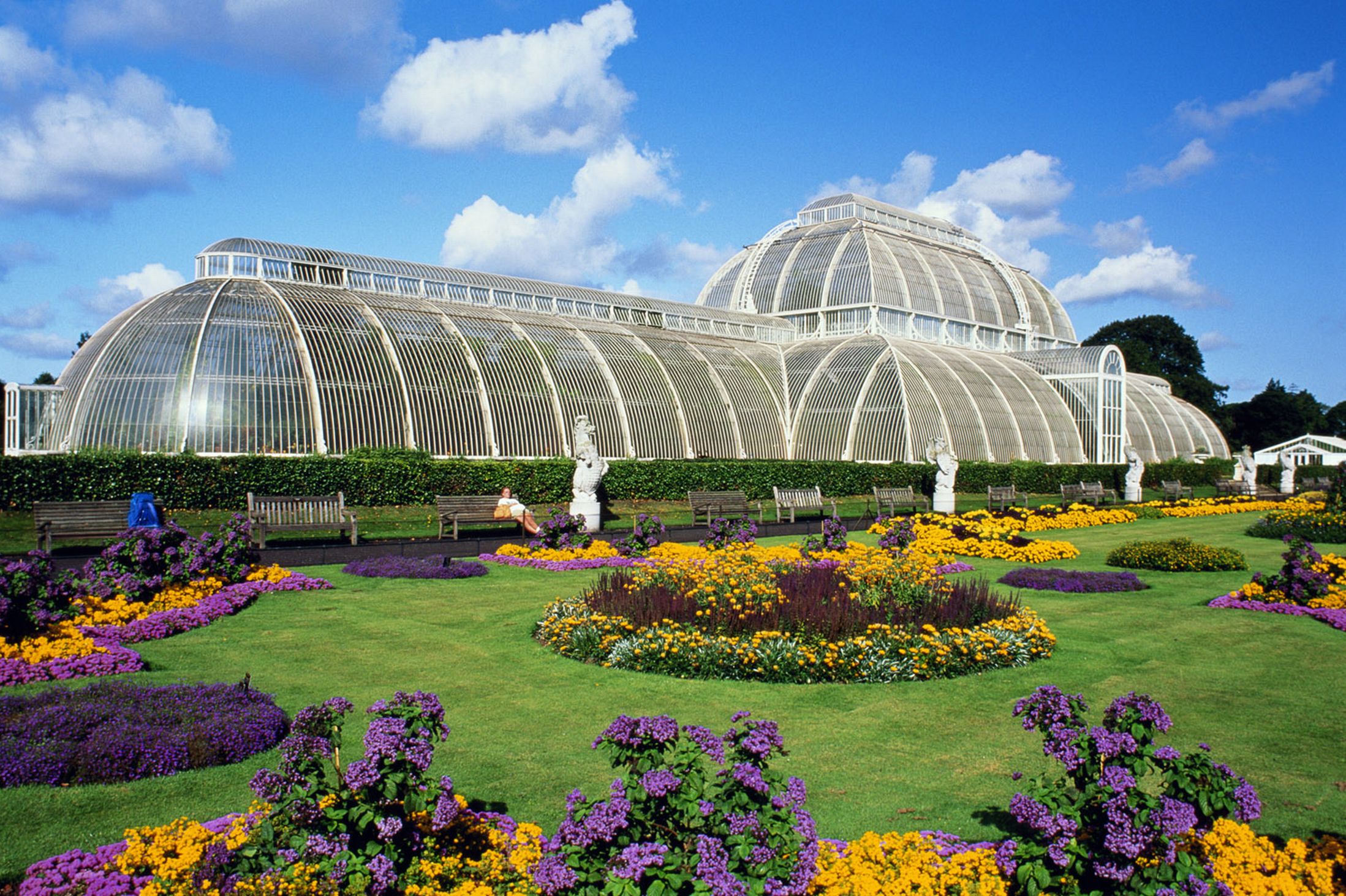 The sub-tropical Abbey Garden is a glorious exception; a perennial Kew without the glass, home to thousands of exotic plants from around the world flourishing right here on the Isles of Scilly.

The beautiful garden, built in the 19th century around the ruins of a Benedictine Abbey, is home to species from across the world’s Mediterranean climate zones, from Brazil to New Zealand and Burma to South Africa.

The Portland Japanese Garden is a traditional Japanese garden occupying 9.1 acres, composed of eight garden spaces and a Cultural Village.

As a Japanese garden, the desired effect is to realise a sense of peace, harmony, and tranquility and to experience the feeling of being a part of nature. Three of the essential elements used to create the garden are stone, the "bones" of the landscape; water, the life-giving force; and plants, the tapestry of the four seasons. 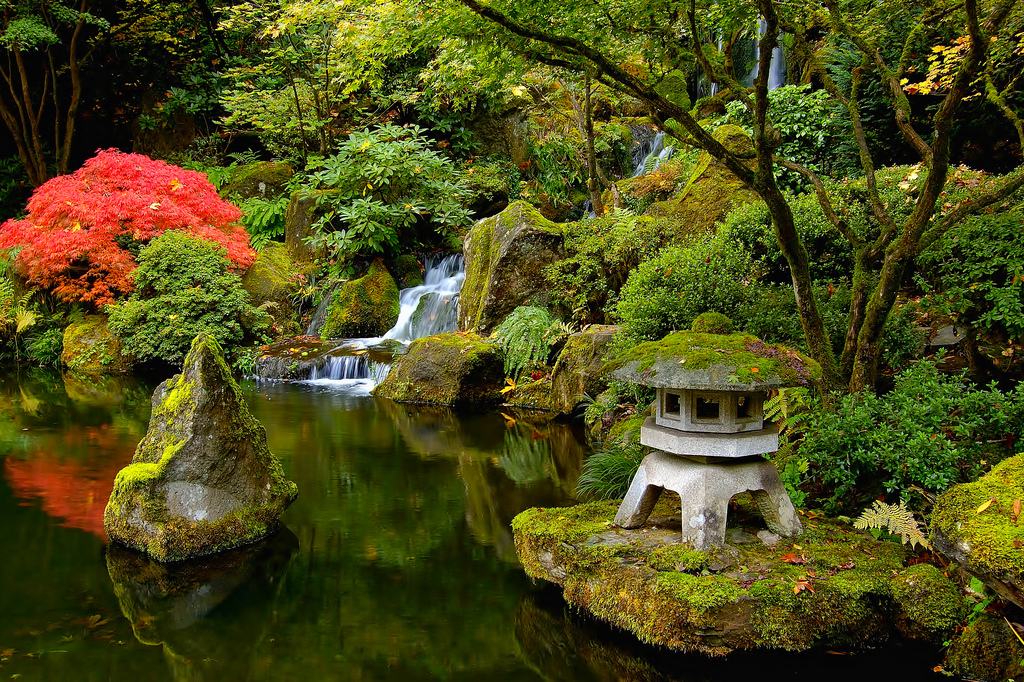 The garden at Lotusland is home to more than 3,000 plants from all over the world, representing the horticultural passion of one extraordinary woman. Madame Ganna Walska dedicated more than forty years to amassing unique collections and commissioning innovative garden designs. 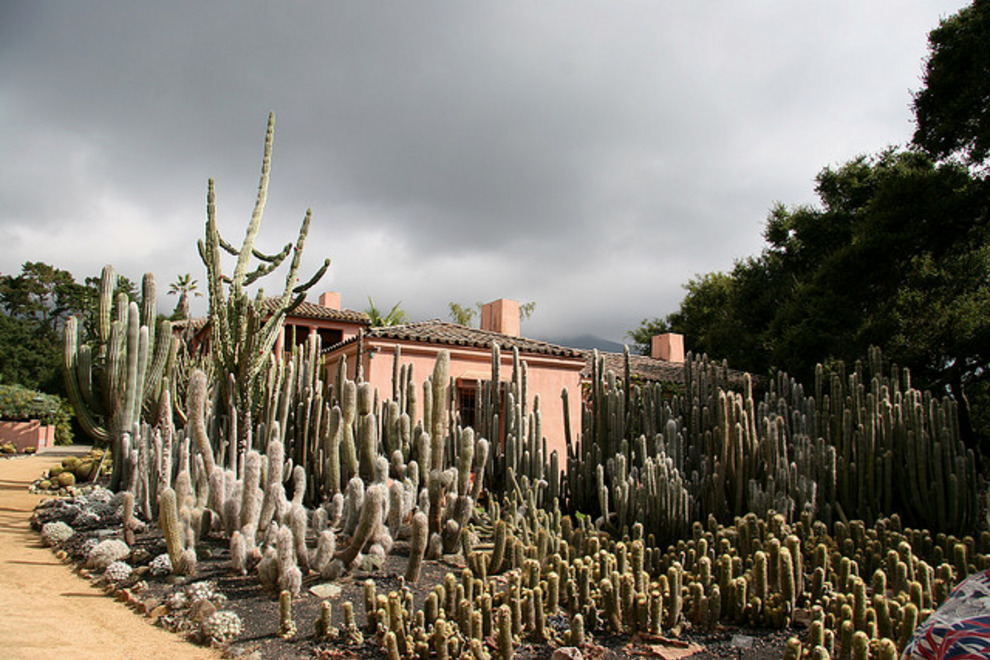 Ryoanji Temple is the site of Japan's most famous rock garden, which attracts hundreds of visitors every day. The garden consists of a rectangular plot of pebbles surrounded by low earthen walls, with 15 rocks laid out in small groups on patches of moss. An interesting feature of the garden's design is that from any vantage point at least one of the rocks is always hidden from the viewer. 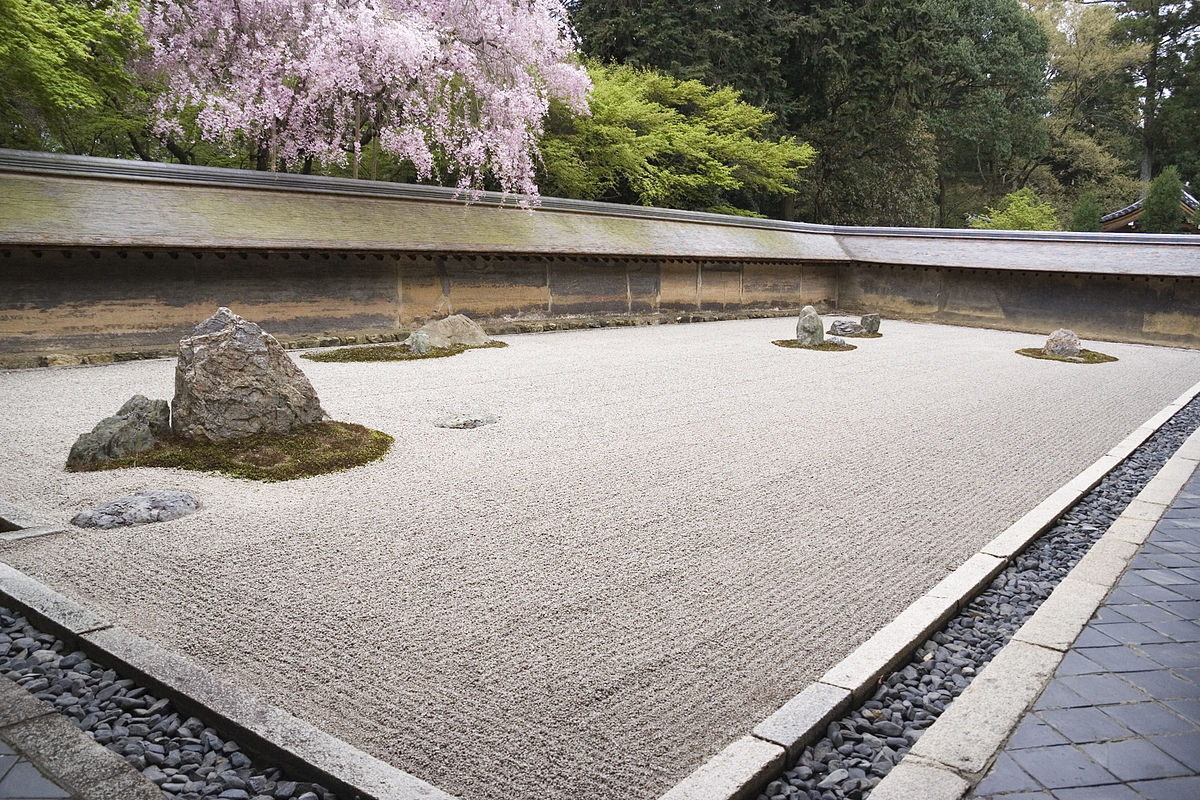 Mirabell Gardens were completely redesigned under archbishop Johann Ernst von Thun in 1690. The underlying geometric form, which is typical for the Baroque, is still clearly recognisable. The visual orientation towards the cathedral and fortress adds to the grandeur of the gardens – simultaneously incorporating them into the overall historical ensemble of the city. 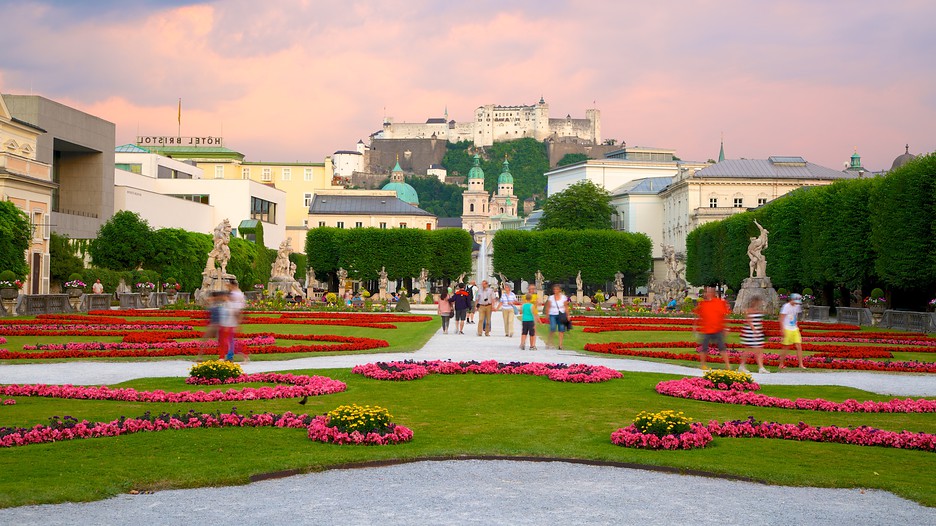 The historic Shalimar Garden is one top tourist attraction in the city which has historic relevance. It is also famously known as the ‘Shalamar Gardens’. The gardens are part of the Mughal era which was completed in a record time of 1 year in 1642. The credit of the place goes to the then Emperor Shah Jahan who was known for his love for nature and construction. 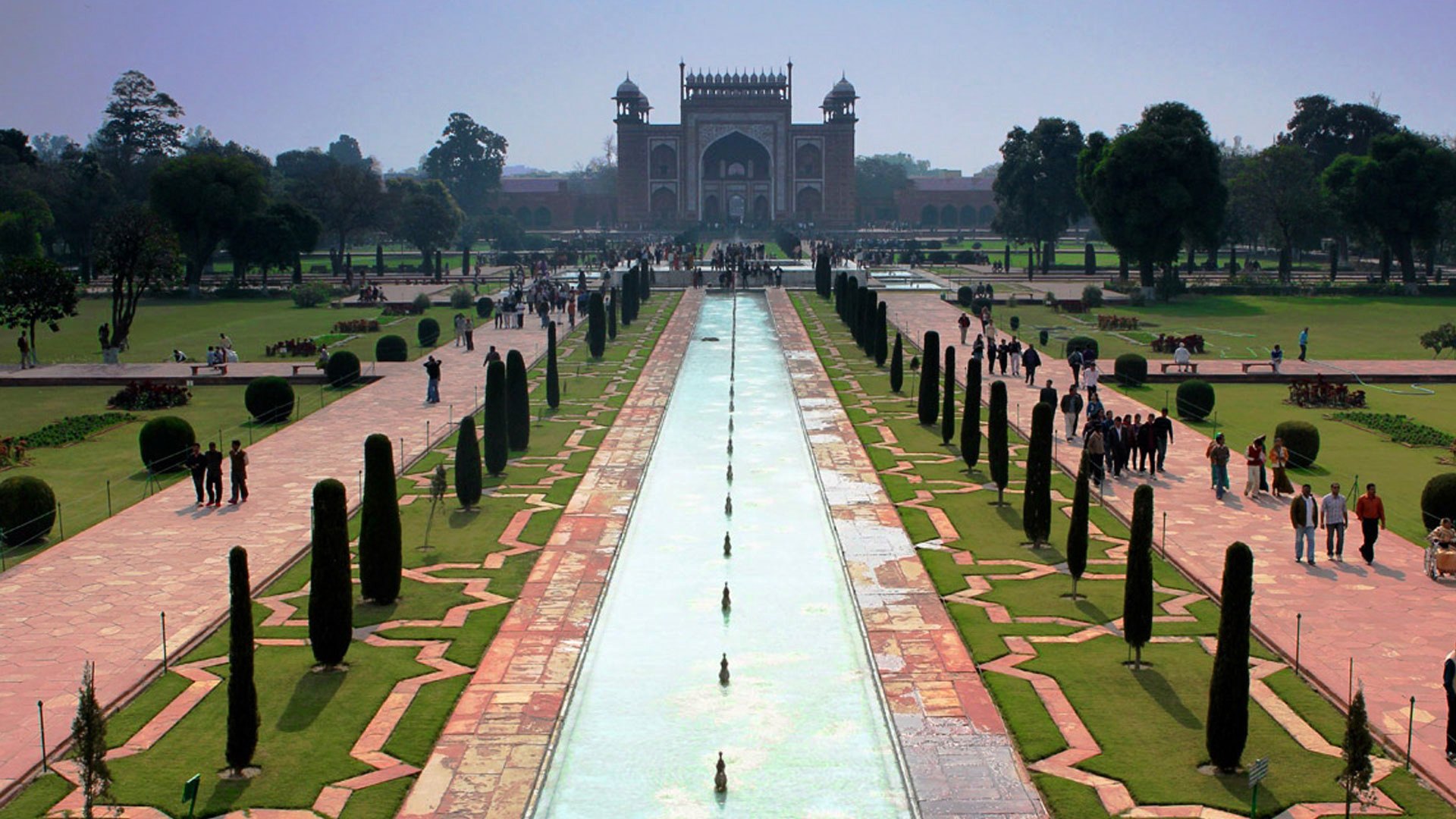 Yu Garden or Yuyuan Garden is an extensive Chinese garden located beside the City God Temple in the northeast of the Old City of Shanghai, China. Yu in Chinese means pleasing and satisfying, and this garden was specially built for Pan's parents as a place for them to enjoy a tranquil and happy time in their old age.

Yuyuan Garden occupies an area of 20,000 square meters (about five acres). However, the small size is not a representative of the attractions of the garden. The pavilions, halls, rockeries, ponds and cloisters all have unique characteristics. There are six main scenic areas here: Sansui Hall, Wanhua Chamber, Dianchun Hall, Huijing Hall, Yuhua Hall and the Inner Garden. Each area features several scenic spots within its borders. 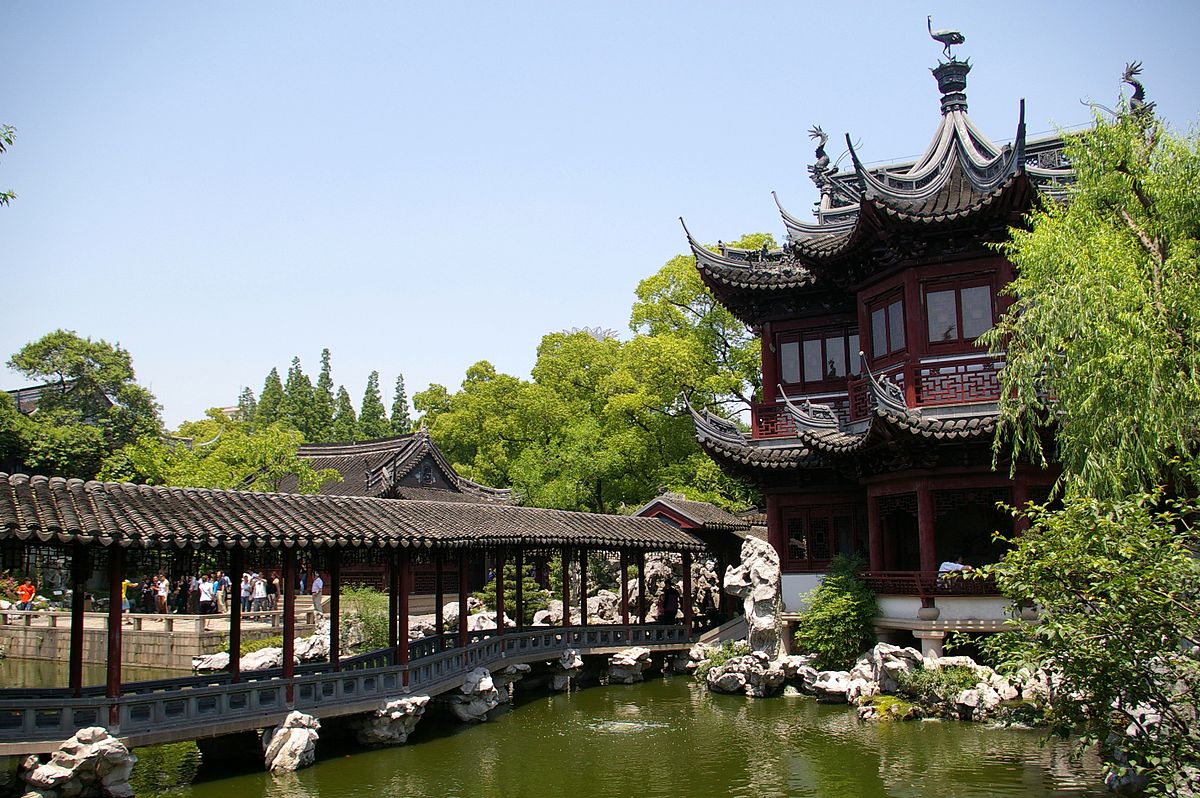 The Royal Botanic Gardens Victoria is one of the world's leading botanic gardens and a centre of excellence for horticulture, science and education. The vision of this garden is a flourishing community and healthy planet, sustained and enriched by plants. Through iconic landscapes, horticultural excellence and scientific eminence they make an enduring contribution to this vision. 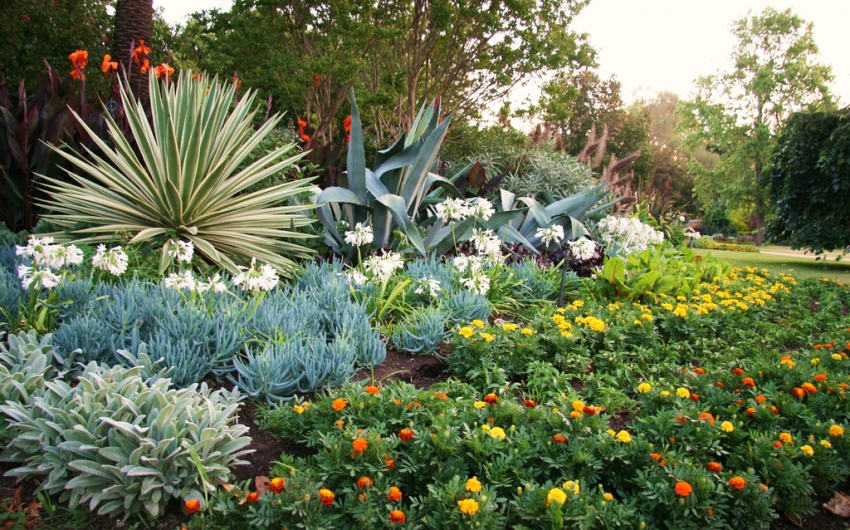 Jichang Garden, people also called it “Qin Garden” based on the surname of its owner. In Yuan Dynasty, it was a dormitory of monks.

Thanks to the simple and serene mountainous atmosphere created with ingenious gardening techniques of rockery and water layout and the superb design of view borrowing, it is regarded as one of representative classical Chinese gardens in the southern China. The present Jichang Garden is composed of two parts: the rockery-dominated west and pool-dominated east. 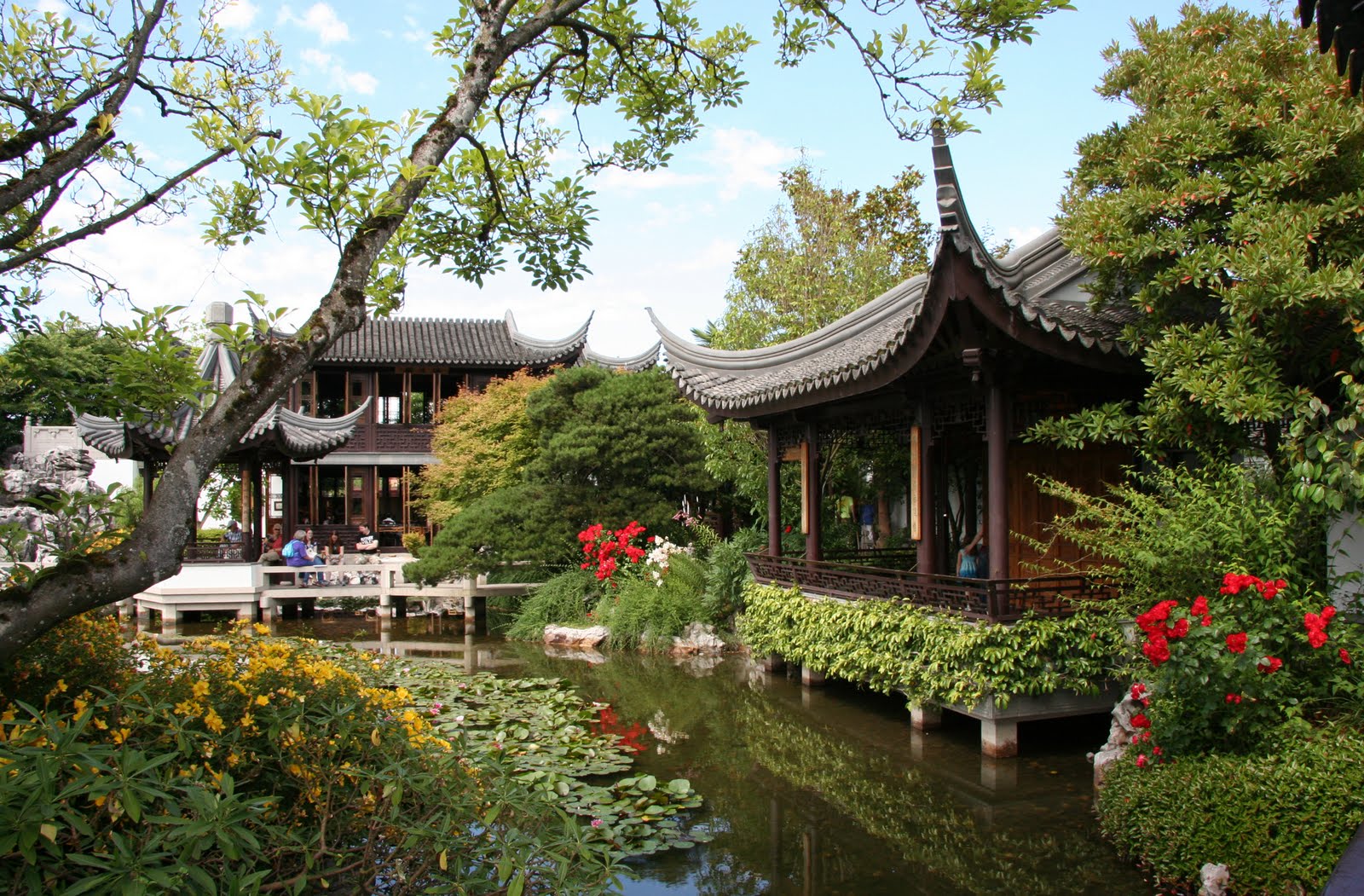 Designed for Shah Abbas I in the 16th century, this delightful garden with its symmetrical proportions, old cedars, spring-fed pools and fountains is renowned as being the very epitome of the Persian garden and its evocation of heaven. Given its influence in the planning of gardens as far afield as India and Spain, Fin Garden, which lies in the suburb of Fin, 9km southwest of central Kashan.

The highlights of the garden are two pavilions: the shotor gelou, a two-storey pool house with water running through the middle of the ground floor, and a recreational pavilion at the rear of the garden. 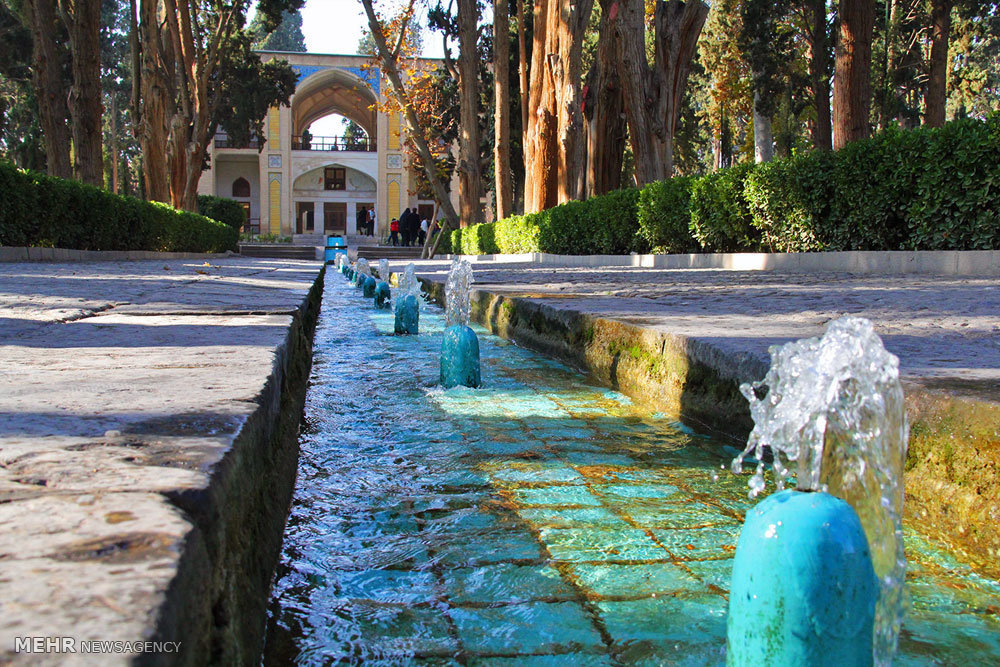 In the 1930s, a small group of passionate local citizens saw the need to conserve the beautiful desert environment. One was Swedish botanist Gustaf Starck, who found like-minded residents by posting a sign that said “Save the desert,” with an arrow pointing to his home. More than seven decades later, thanks to leadership and investments from many individuals, Desert Botanical Garden has blossomed from a dream into a living museum unlike any other.

For more than 70 years, the Desert Botanical Garden has been teaching and inspiring visitors from the local community and around the world, providing research, exhibits and more designed to help us understand, protect and preserve the desert’s natural beauty. 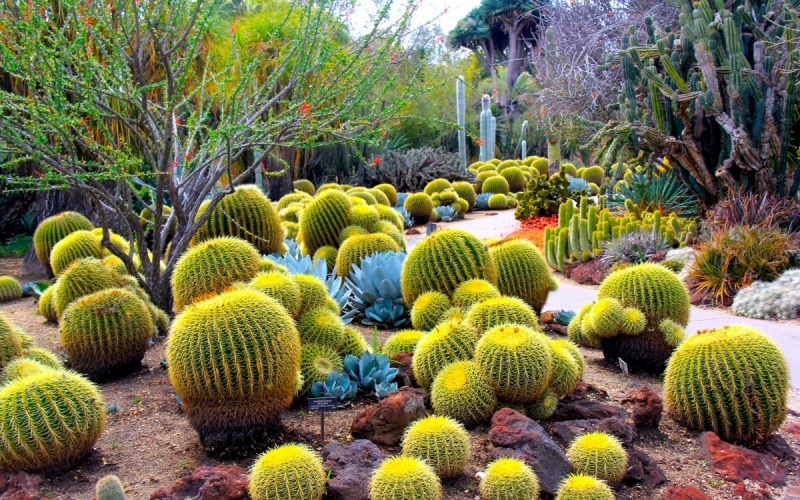 Jennie Butchart began building what is now one of the world’s premier floral show gardens over a century ago. Each year over a million bedding plants in some 900 varieties give you uninterrupted bloom from March through October. Almost a million people visit annually for spring’s colourful flowering bulbs; summer’s riot of colour, entertainment and Saturday Fireworks; fall’s russets and golds; the Magic of Christmas’ decorations; and winter’s peacefulness. 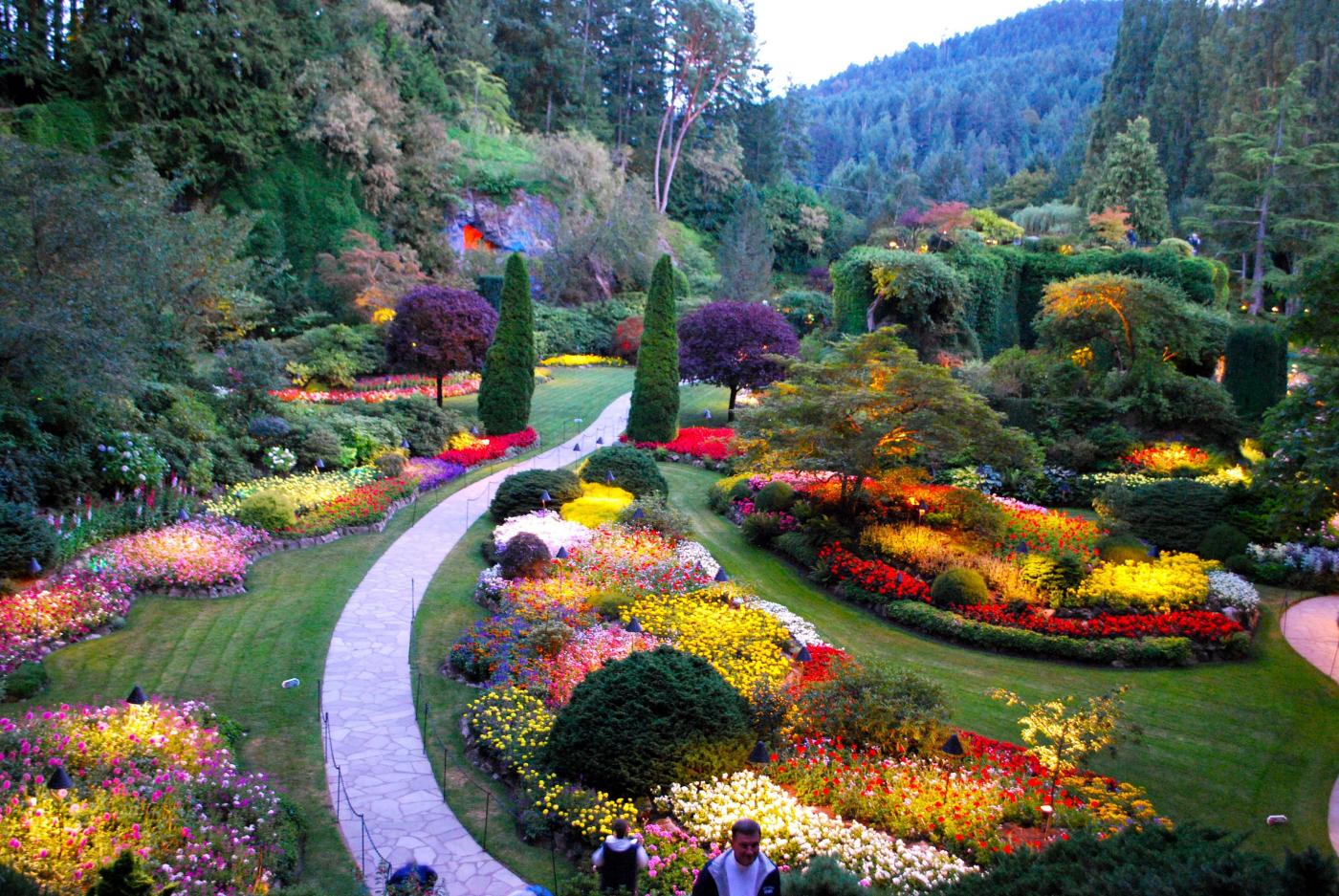 Opened in 1991, Curitiba's trademark botanical garden was created in the style of French gardens. One may see extensive gardens in the French style amidst fountains, waterfalls and lakes, and the main greenhouse of 458 square meters, which shelters in its interior, specimens of plants characteristic of tropical regions.

The principal greenhouse, in an art nouveau style with a modern metallic structure, resembles the mid-19th century Crystal Palace in London. The Botanic Museum, which provides a national reference collection of native flora, attracts researchers from all over the world. It includes many botanic species from the moist Atlantic Forests of eastern Brazil. 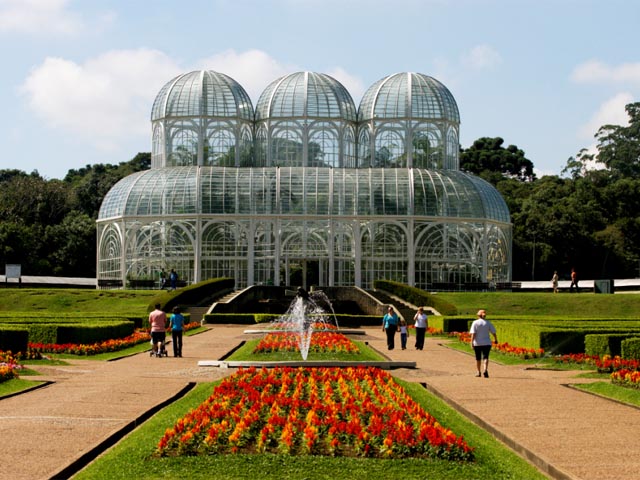 Photo from One Curitiba

Kenrokuen Garden is a beautiful Japanese garden with an area of 11.4 hectares located on the heights of the central part of Kanazawa and next to Kanazawa Castle. From its scale and beauty, it is regarded as one of the most beautiful feudal lords' gardens in Japan.

Kenrokuen Garden has a big artificial pond, and hills and houses are dotted in the garden. Visitors can appreciate the whole, dropping in at them. Kenrokuen, which means "having six factors", was given the name because of the six attributes that bring out the perfect landscape of the garden: spaciousness, tranquility, artifice, antiquity, water cources, and magnificent view from the garden. 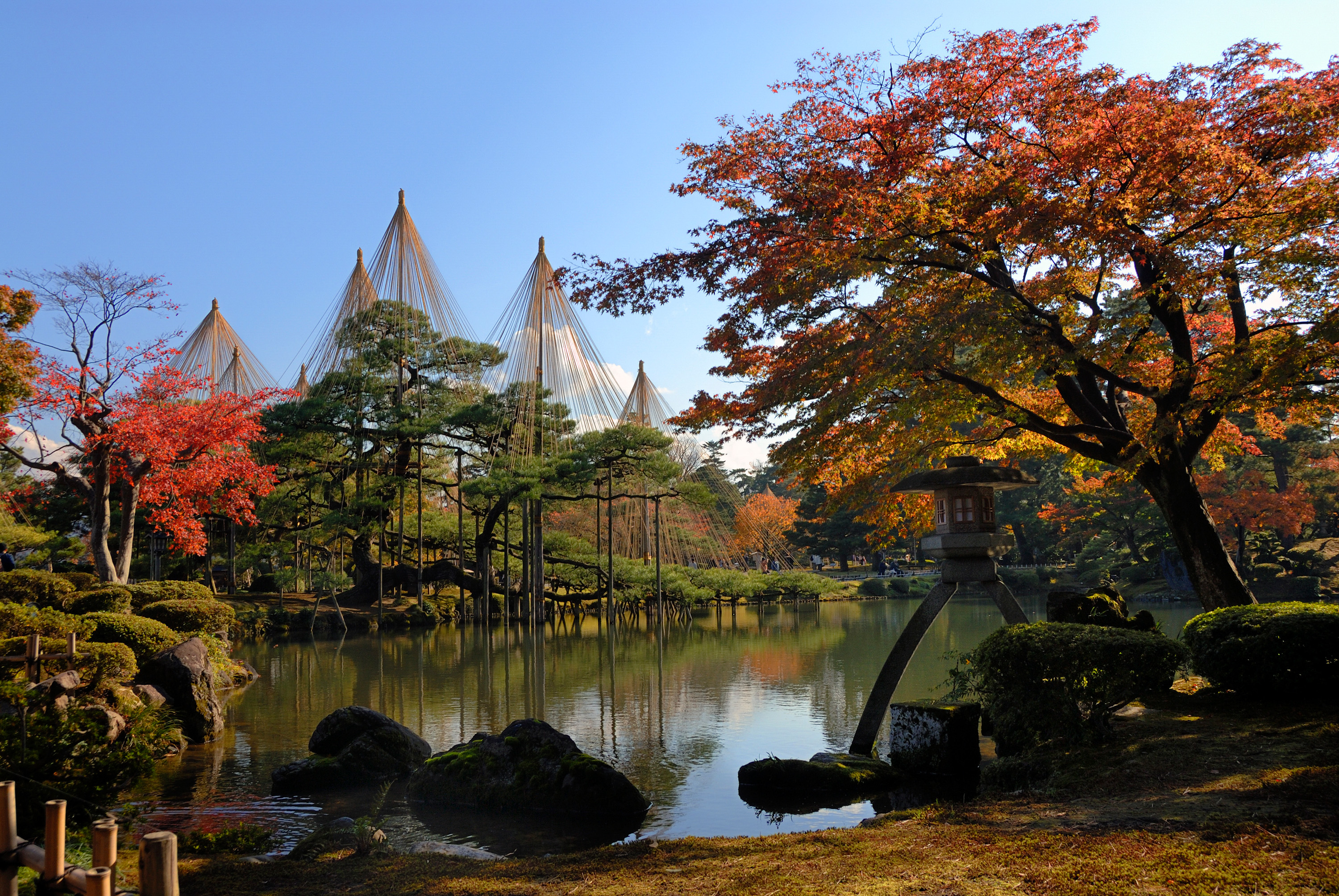 Nongnooch garden opened to the public in 1980, and is one of the most popular attractions of Thailand as well as a center of world botanical significant under the concept “a garden for all people of this world”. 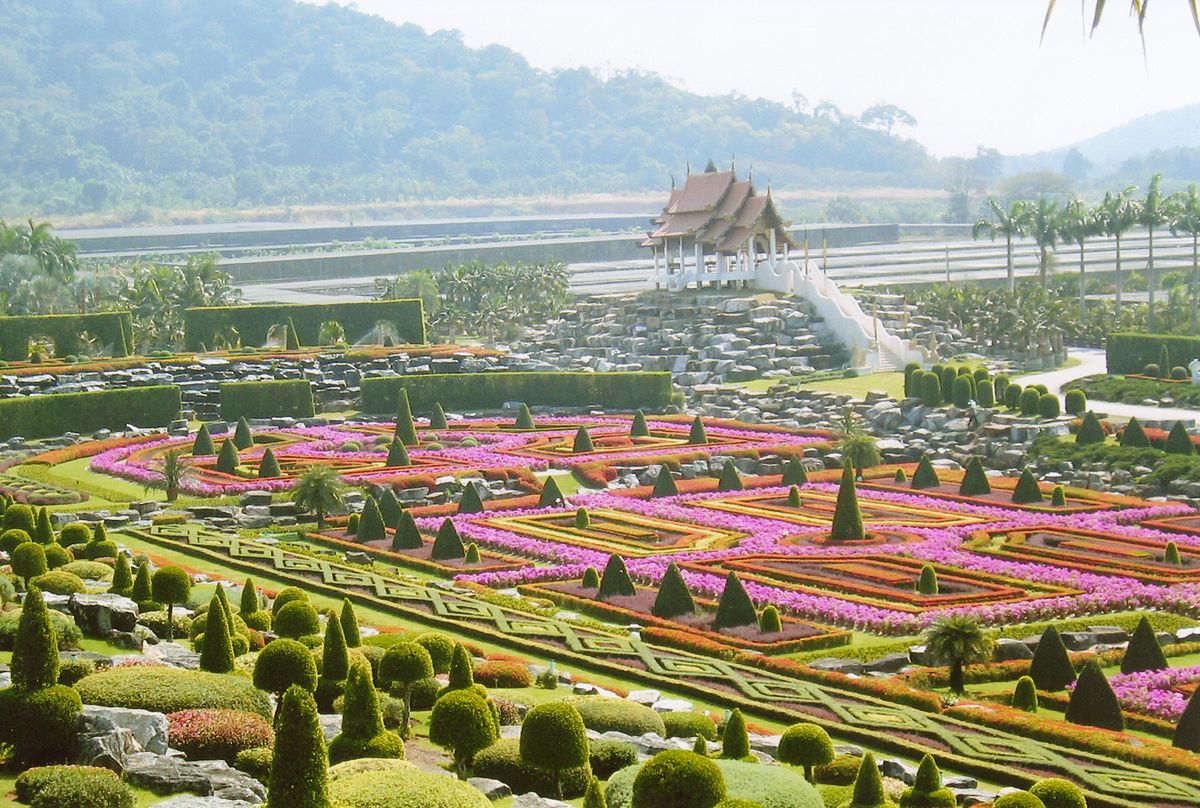 Keukenhof is a flower garden in the area of Lisse, the Netherlands. The park, which covers 32 hectares, each year in the spring flower bulbs of various companies from the surrounding area can be enjoyed on display to the public.

The Dutch government set this park as a family tourist park, the park is filled with at least seven million tulips with eight hundred varieties.

The majority of flowers that decorate this garden are the various types of tulips with various the colours. However, biodiversity adorns the Garden of Europe is not only that, in Keukenhof you can also find various other interesting flowers, such as lavender, rose, chrysanthemum, daffodils, and other subtropical plants also bloom during the spring. The flowers are planted, arranged and combined in such good based on the annual theme, of course, with the added touch of Dutch culture, make beauty rows of colourful flowers. 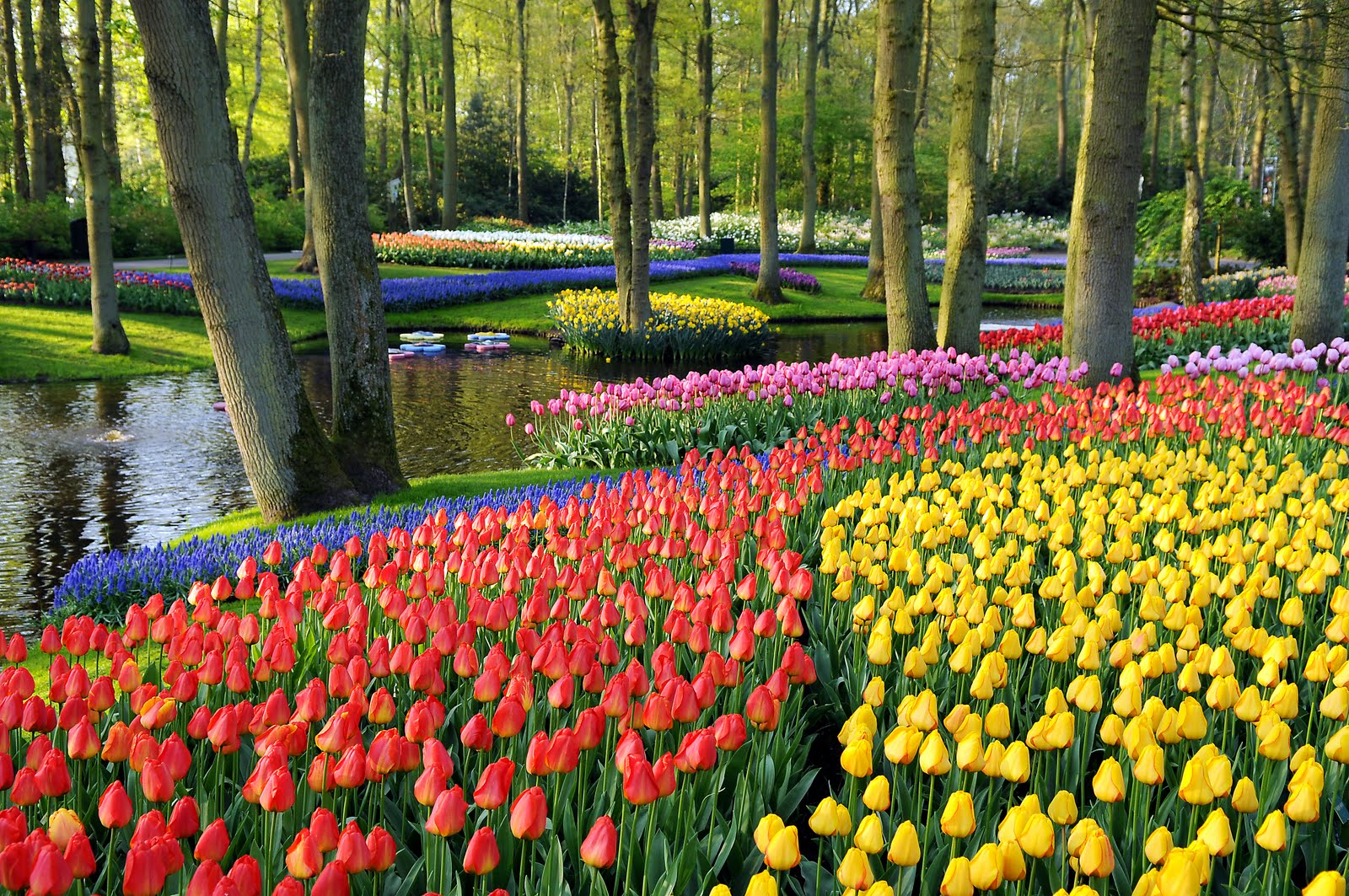 5. Gardens at the Versailles Palace, France

The garden was developed and extended by the gardener André Le Nôtre and are now one of the most visited public sites in France, receiving more than six million visitors a year.

In addition to the meticulous manicured lawns, parterres of flowers, and sculptures are the fountains, which are located throughout the garden, the fountains contribute to making the gardens of Versailles unique. 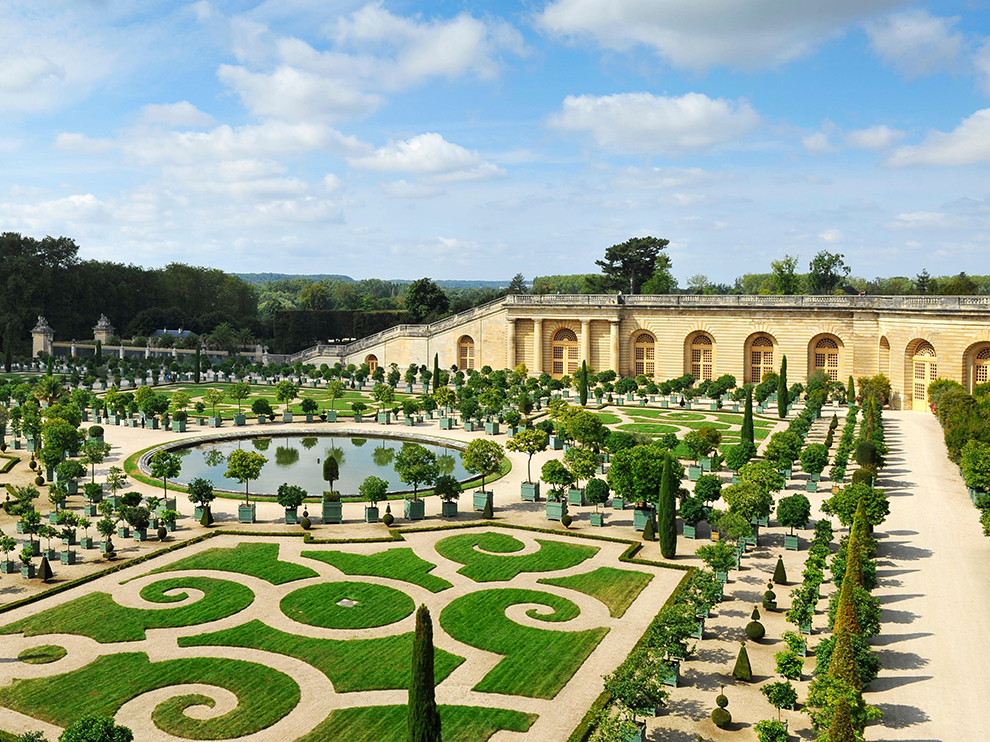 4. The Garden of Cosmic Speculation, Scotland

This incredible garden, known as The Garden of Cosmic Speculation, is not your everyday example of landscaping; instead it is based on mathematics and science mixed with nature and man-made lakes. Built in 1989, it has been called by some the most important garden in the 21st century. It is a private garden built by Charles Jencks and his late wife Maggie in Portrack House, Dumfries, Scotland.

Its design was influenced by Chinese garden philosophy. One of its main features is long snaking curves and waves that both satisfied the couple’s love for Chinese landscape painting and complemented the Scottish hills around them. Jencks makes use of one of the new scientific theories as well, the theory of complexity, which states that everything is “self organizing and harmonic”. 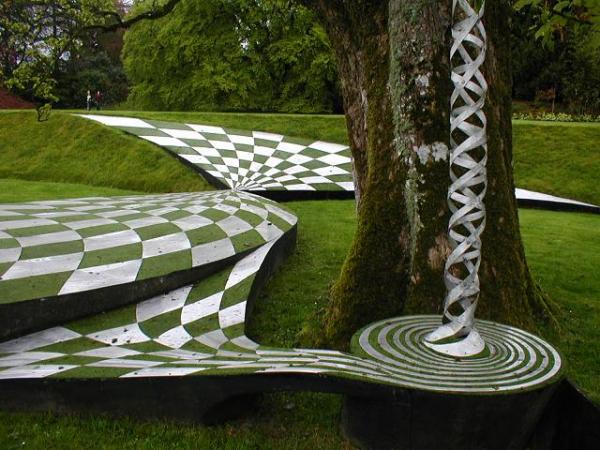 The Jardin Majorelle in Marrakech is one of the most visited sites in Morocco. It took French painter Jacques Majorelle (1886-1962) forty years of passion and dedication to create this enchanting garden in the heart of the “Ochre City”.

"We amble along shady lanes, in the midst of trees and exotic plants of dreamy origin; we walk past refreshing, burbling streams and pools filled with water lilies and lotus flowers; we hear wafting through the air, laden with sugared fragrance, the rustling of leaves and the chirping of numerous birds who come here to take refuge; we stop, and the path turns unexpectedly, revealing a building with Moorish charm, with a hint of Art Deco, painted in astonishingly vibrant primary colours, glowing with an intense blue the artist perceived in the Atlas Mountains. We are soothed and enchanted by the harmony of this luxuriant and vivid imagery, which issues a delicate summons to the senses, offering us a calming retreat near, and yet so far from the bustling city, sheltered from time by high earthen walls." 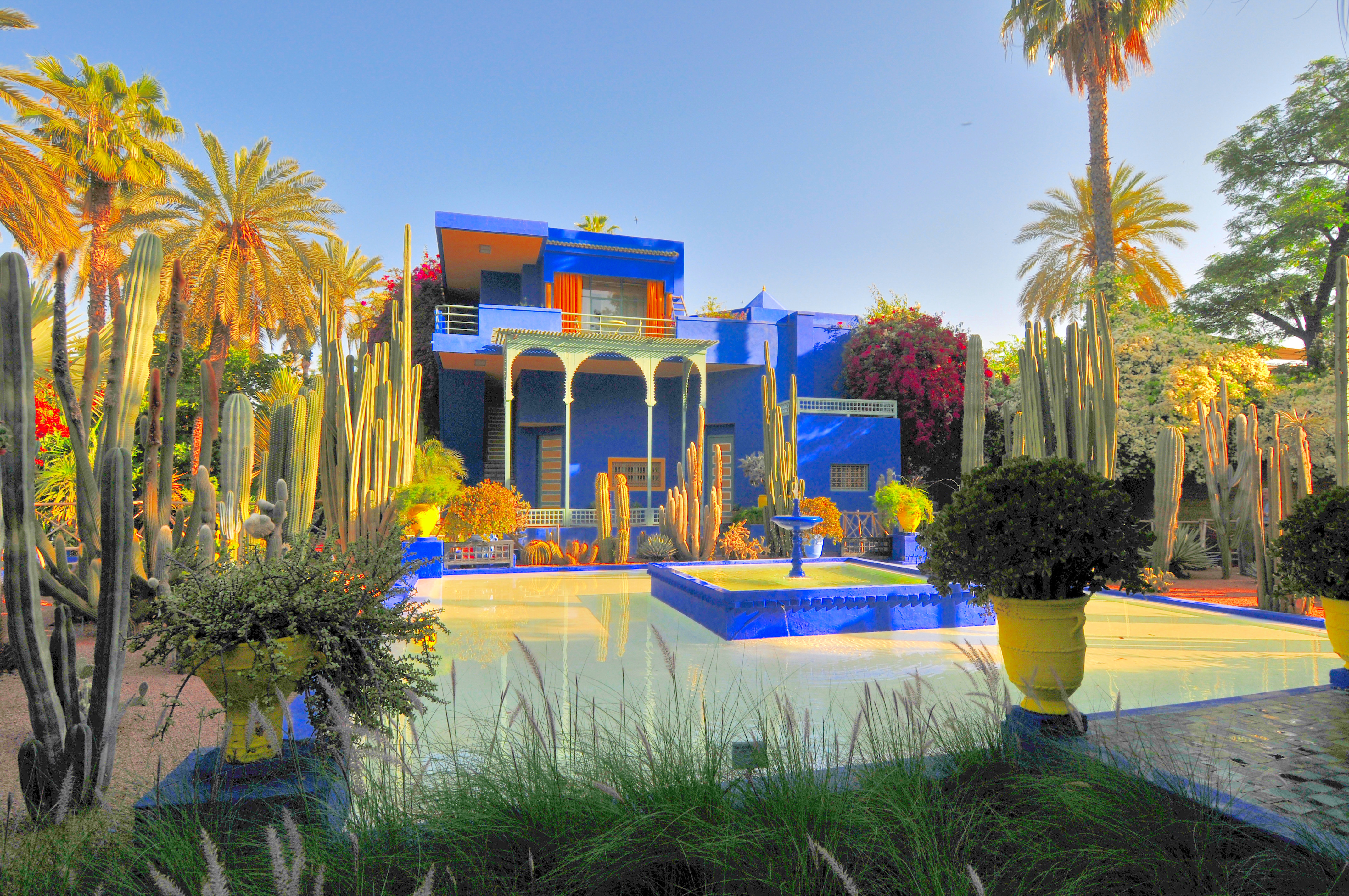 There are two parts in Monet's garden: a flower garden called Clos Normand in front of the house and a Japanese inspired water garden on the other side of the road. The two parts of Monet's garden contrast and complement one another.

The land is divided into flowerbeds where flower clumps of different heights create volume. Fruit trees or ornamental trees dominate the climbing roses, the long -stemmed hollyhocks and the coloured banks of annuals. Monet mixed the simplest flowers (daisies and poppies) with the most rare varieties.

Claude Monet did not like organised nor constrained gardens. He married flowers according to their colours and left them to grow rather freely. 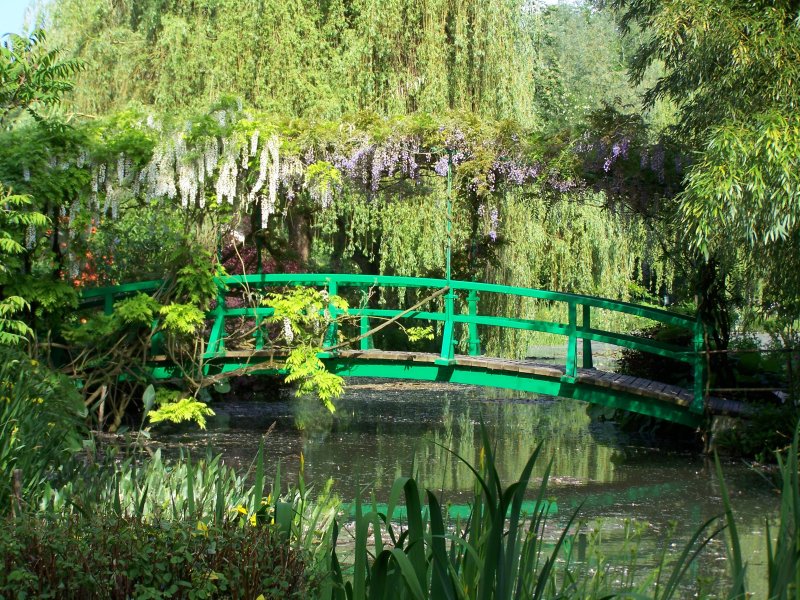 Kirstenbosch National Botanical Garden lives up to its reputation as the most beautiful garden in Africa and one of the great botanic gardens of the world. Few gardens can match the sheer grandeur of the setting of Kirstenbosch, against the eastern slopes of Cape Town’s Table Mountain.

Kirstenbosch displays a wide variety of the unique plant life of the Cape Flora. Plants from all the diverse regions and biomes of southern Africa are also grown at Kirstenbosch, including a near-complete collection of cycads.

The Botanical Society Conservatory is a custom-built glasshouse to grow and display plants from the arid regions that cannot survive outdoors. There are over 7,000 species in cultivation at Kirstenbosch, including many rare and threatened species. 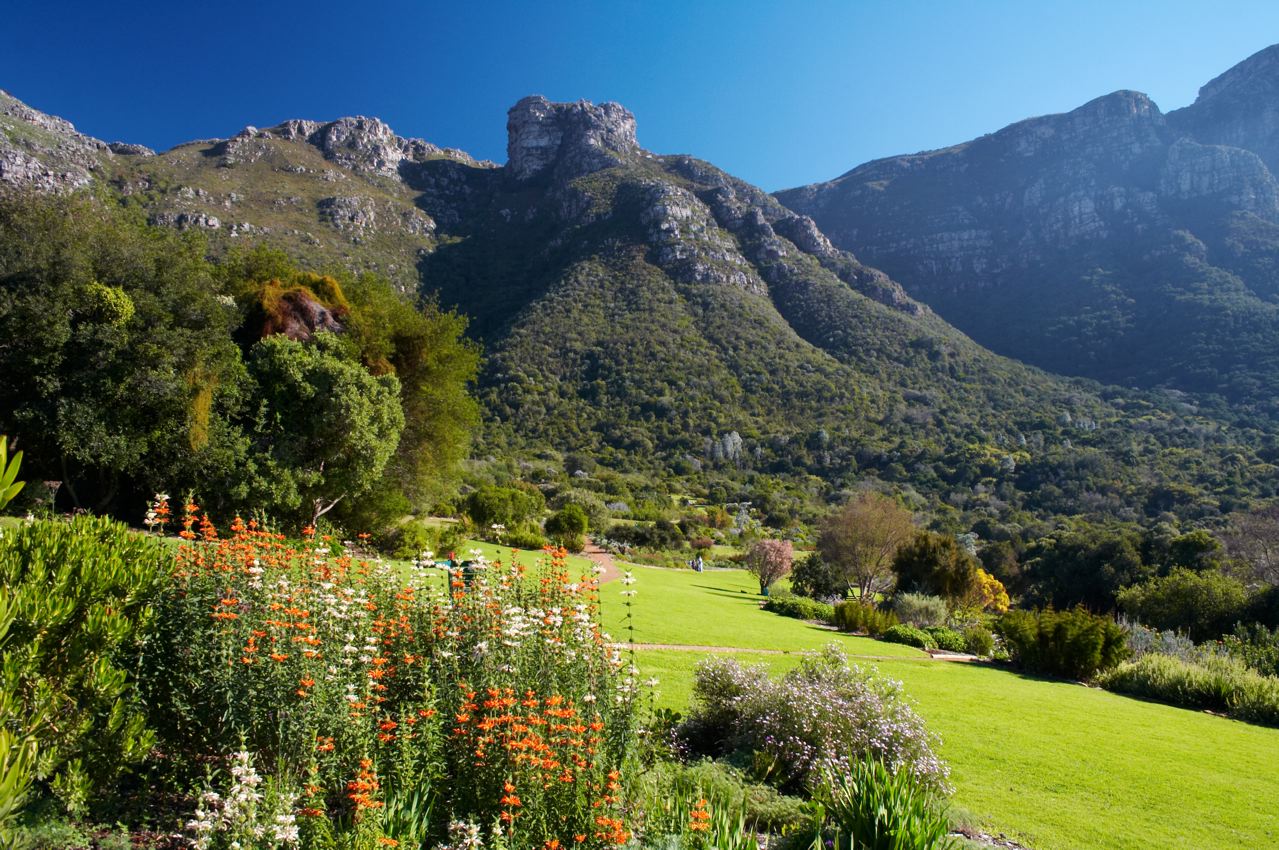