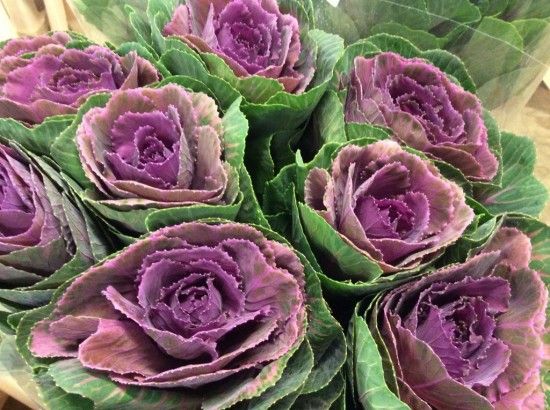 The range of cut flower and foliage material available today is truly amazing; how it has changed and evolved over the years! When I first started in the cut flower world, over forty years ago fall flowers were mainly spray chrysanthemums, chrysanthemum blooms and dahlias. Cabbages were something you cooked a little too often, rather than arranging them in a vase. Yes, there were always carnations in rather strong colours, or pink and white which were used in bouquets and pulled to pieces to make corsages for weddings. Gladioli added a bit of spike here and there, but again colours were limited. A visit to a flower market or a flower wholesaler today is a trip to a treasure trove of possibilities. I always find myself distracted and drooling over blooms that are outside the palette I should be working to. 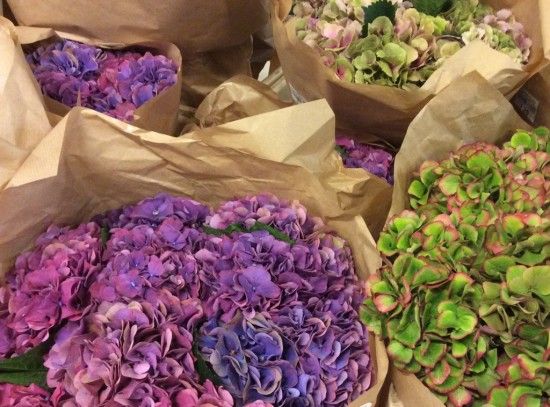 So I thought I would select a colour palette to share with you and talk about a few trends along the way. In the past couple of years hydrangeas have rocketed to stardom in the flower world. From white, through pink and purple to blue, tinged with green and copper and iridescence. The flowerheads are big, opulent, extravagant but graceful.  They are wonderful for large arrangements (my style I must admit) but also good in tight, contemporary creations as the fabric to a composition. I am particularly in love with the Hydrangea Glowing Alps series. These have shimmering shades that sit beautifully with other colours. You can take them in any direction you choose. They also mix well together, Glowing Alps Classic is lovely with Glowing Alps Purple for example. 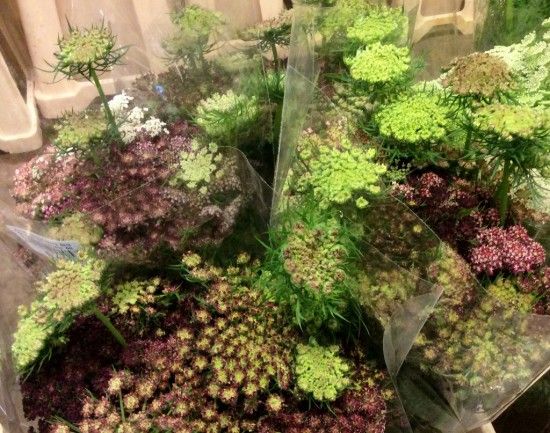 For the botanically minded I should perhaps say that cut flower names are often corruptions of proper plant names. They are often an international mixture of a bit of Latin, English and a sprinkling of imagination; you may need to interpret.  Some of the names of the various types of umbellifer that have become very popular are good examples. Ammi daucus carotta Dare, a type of cow parsley or carrot flower varies in nomenclature. This is typical however of the garden and naturalistic subjects we use today.  They have a lightness and are good at veiling more solid subjects in arrangements and tied bunches.  I love this one for its hint of colour depth. 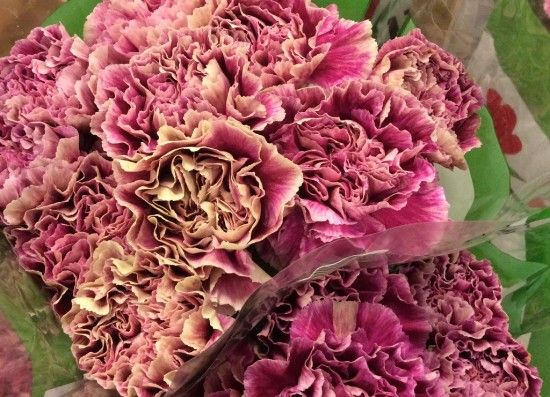 On a more traditional note carnations too have evolved to new levels of sophistication. The spray carnation became tarred with the supermarket brush and has lost popularity with decorators. I think it is fair to say they now favour carnation blooms which are good value as bold blooms in a composition. Colour are rich and varied. My favourite is this one, Carnation antiqua. It is wonderfully old fashioned and faded and incredibly long lasting. I find blooms easier to handle than spray carnations anyway. The latter tend to be brittle and fall apart when you are working with them whereas most carnation blooms are more resilient. 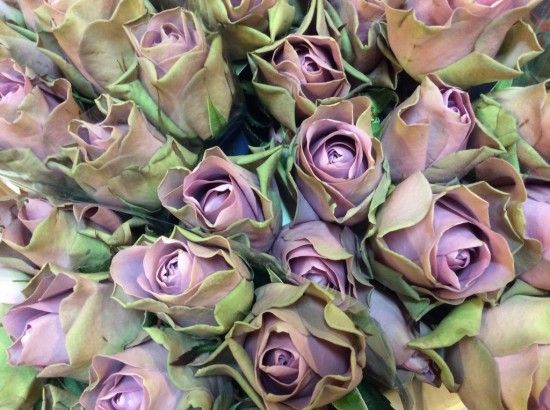 Roses too have changed over the years. Yes, there is still a demand for the classic red rose but decorators are attracted by superb subtle colours and spray roses.  I love all the lilac-blue shades. I gravitate towards Rosa Cool Water and Rosa Memory Lane which is even softer. Some of the larger blooms are fabulous for larger arrangements and they are remarkably long lasting too. The secret of success with roses is conditioning. I’ll put a note about that at the end of the blog. 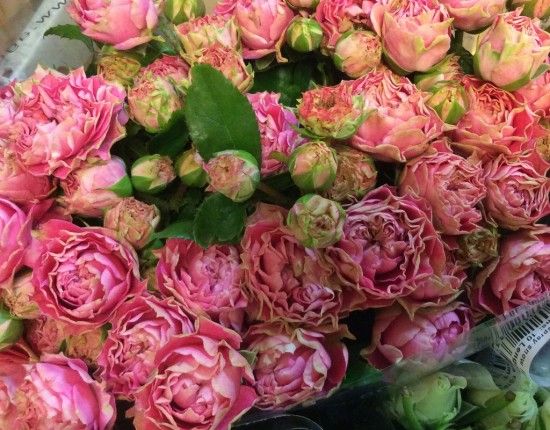 Spray roses are really useful, especially for smaller arrangements, posies and bridal work. They suit the tightly gathered style of bouquet currently favoured by brides.  My spray rose of the moment is Rosa Splash Sensation. It is actually quite a strong cerise pink, but silver grey on the underside of the petals giving the blooms a wonderfully laced look because of the fimbriated edge of the petals. I think a shot of brighter colour really lifts the other soft and subtle shades which can look really flat, especially when viewed from a distance. 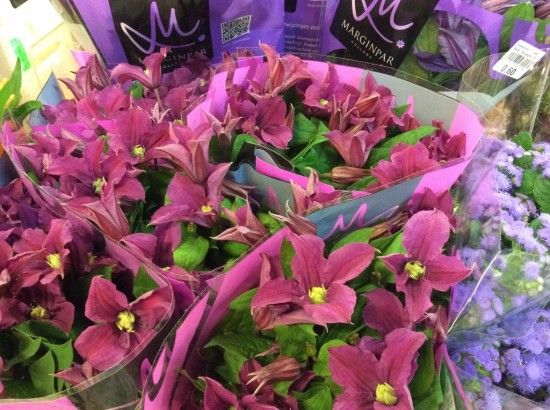 As I said more and more garden flowers are appearing with every season, reflecting the interest in the cutting garden. Nigella, larkspur, sunflowers, amaranthus to name but a few, along with perennials such as astrantias, which I would say re one of the flowers of the season. Shrubs and climbers feature too, one of the most useful being the small flowered clematis.  Clematis Pirouette has fine woody stems, dark green leaves and four petalled flowers with elegantly curled petals. I love the way it grows so naturally in an arrangement. It’s ideal trailing over the edge of a tall vase or dripping from a bouquet. 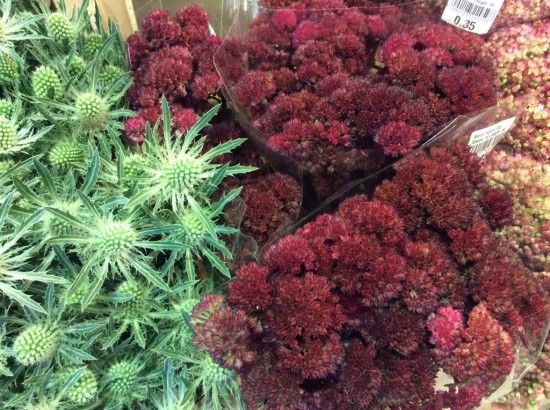 Amongst those border perennials that now feature so strongly in the cut flower world, eryngium and sedum are both worth of note. The blue varieties of eryngium provide a long season of a scarce colour and a strong sparkling flower form.  The silver Eryngium Sirius Quester is worth looking out for. It is less masculine than some of the others and it lasts well. Try it with silvery-lilac roses. Sedums are heavy and fleshy but again they have lasting quality. I find them useful deeper into arrangements to add depth and weight and to show off the lightness of subjects like astrantia. 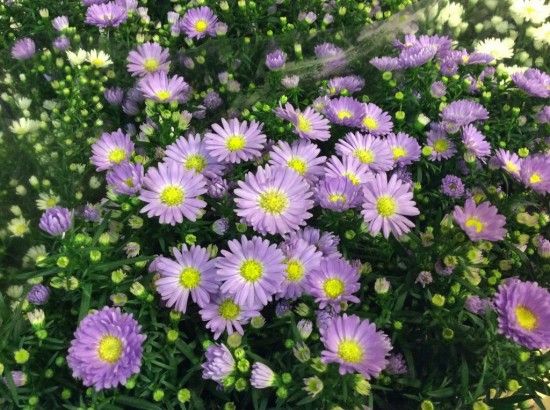 The spray asters are nothing new. When they first appeared they were really an alternative to good old gypsophila (now quite trendy again). I have to say if you want something light and pretty that demonstrates that lilac-blue is the ultimate mixer then Aster Cassandra takes some beating. The cheery little yellow centres to the flowers also do a lot to light up arrangements of all sizes and it is a great gap filler. One thing is certain it goes a long way. A wrap of twenty five stems explodes into a cloud of fine leaves and dainty blooms. 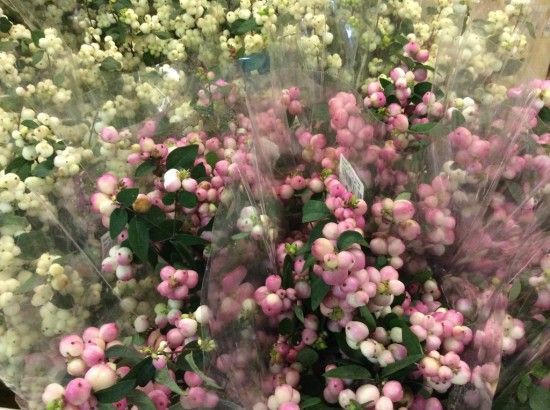 I haven’t talked about foliage and berry, it’s really a subject on its own, I will blog about it soon. However I will mention a relative newcomer that is popular in the latter part of the year: snowberry. Botanically symphoricarpos the snowberry is considered a pretty basic shrub often used for game cover. You might think twice about being seen with it in the garden. It has found a new life. The ugly duckling has become a desirable decoration. With white or pink berries it fills well and cascades from urns and pedestals. 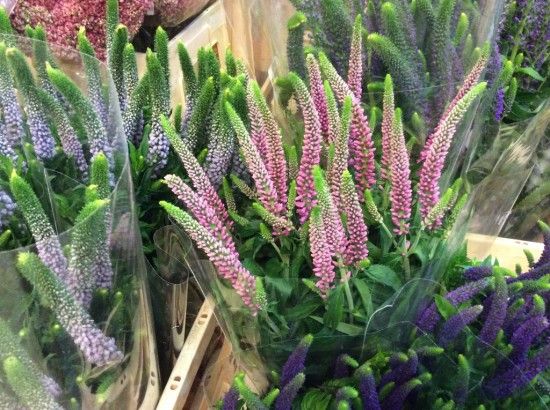 All good planting combinations need variation in form and flower compositions are no different. Spikes liven up those soft rounded shapes. Veronicas are wonderful where you want small, subtle pretty spikes. Clump them in your creation or drift them and they will be lovely. Spread them evenly and beware, you could create a hedgehog effect.

Finally I said I would mention conditioning and extending the life of cut flowers:

Use clean buckets and vases; wash out with bleach periodically

Remove lower foliage from stems. Cut each stem above a joint a plunge into water immediately.

Leave in a bucket for a few hours before you arrange

If you would like more cut flower tips and ideas on the blog let me know. And how about doing an online course on contemporary floral design with world renowned floral designer Paula Pryke (OBE) @mygardenschool.  It's booking now for Oct 4th.  I might well see you in class..