While King Canute the Great, might not have been able to stop the tides, you may be surprised to know that you can change your climate….well at least to a certain extent!

You can improve and control the climate conditions within your garden by creating ‘microclimates’ for particular areas or groups of plants.

While you can’t control your countries regional climate, within that region, exposure to sunshine, wind or rain, makes weather considerably different from one garden to another. Open hillsides facing south get more sunshine than gardens hemmed in by buildings, hilltops are windier than valleys, and gardens along the banks of rivers or lakes suffer more fog than those only a short distance away.

These geographical differences combined with some clever planning by ourselves, create the individual ‘microclimate’ of our gardens or even for individual planting beds.

Heat comes from the sun rays that warm up any surface they strike. Water is partially transparent to sunshine, so that the benefit of heat is spread over a large volume of water, raising its temperature very little in a short period. Glass, when clean, is almost entirely transparent to sunshine and it’s the objects underneath glass that warm up, rather than glass itself. Other materials heat up according to the materials of which they are made, and some of the best absorbers of heat in the garden are brick, paving stone and bare soil.

Although the sun is by far the largest source of heat, everything on earth is also a radiator in its own small way. On a sunny days,  no sooner have objects acquired heat from the sun,  they re-radiate some of that heat, for the benefit of anything nearby which hasn’t done so well. Hence a south-facing patio and house wall, will be a definite hot spot on a sunny day because of heat radiating from the surfaces. Also vege­table widely spaced in weed-free soil, will enjoy a warmer microclimate than a crowded flowerbed in a lawn.

Heat can also be distributed by conduction, through brick, downwards into soil and, particularly important, to the air that lies in contact with heated surfaces. Air so warmed, becomes lighter and rises upwards to be replaced by colder air from above which then warms in turn. Gradually warmed air spreads throughout the garden by this convection method, even circulating to areas receiving no direct radiant heat from the sun. On cloudy days, air temperature is pre-determined by its past history and the amount of heating it has received in other parts of the world.

Temperatures are similar throughout a garden, except perhaps for special very small areas. A chimney- breast wall can provide a favoured microclimate for a bush whose buds tend to get nipped by late spring frosts. It doesn’t hurt so much to lose expensive heat from indoors through brick if you can use it to benefit the garden. But for the best result in creating a warm micro­climate at that spot you must trap the heat under a polythene cover or lean-to, otherwise wind - which is only moving air - will whip it away before it accumulates.

Wind is a thief of moisture as well as heat. All air contains water vapour, the actual amount depending upon whether its stock has been replenished by journeying across the sea or kept short by travelling across large expanses of land. At any particular temperature air has a maxi­mum possible capacity for vapour and this capacity increases with rising tem­perature. Moreover, so long as its vapour content is under capacity, air is thirsty for more and drinks from whatever source it can find - washing on the line, soil, or the leaves of plants.

Hence rising temperature on a sunny day, or an inherently dry air stream which come from the east, are both likely to denude a garden of moisture and it may be necessary to act the rain-god and alter the microclimate by artificial watering. The same necessity occurs on even a cloudy day, if a strong wind, damp or dry, is blowing. That merely means that a great deal of air is passing very quickly and taking lots of gulps of mois­ture in the process. A strong wind is a blessing to dry out soil after a rainy spell, but in drought conditions it makes already bad conditions worse.

If you add to these characteristics of wind its sheer brute strength and battering power, protection against it can be seen as a major objective in modifying the microclimate of a garden. Secure staking helps, not because it actually makes a garden less windy but because it tricks plants into thinking it is less windy by giving them extra strength to resist! The trouble is that wind cannot be stopped, only diverted. When it comes across a row of houses with passageways between, it funnels into the constriction and comes out of the exit with increased speed, rather like water forced through the nozzle of a hosepipe.

If wind encounters a wall, it either goes round the corners or over the top, giving increased speed in those areas because extra air is crowding through. Moreover, wind eddies back­wards in the relatively ‘empty’ space on the leeward side, sometimes with as nasty effect for plants situated there as if they had received the direct blast of air. A hedge or permeable fence gives better wind protection because it allows enough air through to prevent the eddy space behind, yet breaks the initial force of the blast. 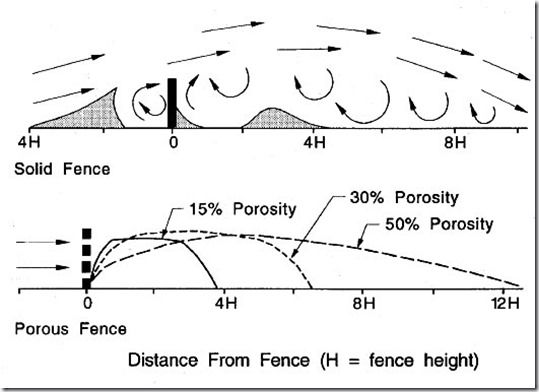 The choice of site for a wind barrier may be obvious, like the end of a passageway which runs in the same direction as the most frequent winds. Or it may involve a difficult choice between incompatible factors. In Britain the coldest winds come from between north and east, the most drying winds from between north-east and south-east, gales come in any season from any direction but mainly from the western half of the compass. Damaging salt-laden winds in coastal gardens come from whichever direction faces the sea. You can’t protect a whole garden from every direction unless you risk undue stagnation of damp air in wet seasons.

Coastal gardens have little choice and must protect against onshore wind, even if this means some deprivation of sunshine in western and southern districts. Gardens in the middle of such coastal towns possibly have enough buildings between them and the sea to act as a preliminary barrier and have too great a need for sunshine for you to dare erect another barrier except against cold north winds. East coast gardeners in the UK have less heart-searching to make because by protecting against north and east winds they deal with both the cold, the dry and the salt winds without detracting from their quota of sun.

Glass as a barrier 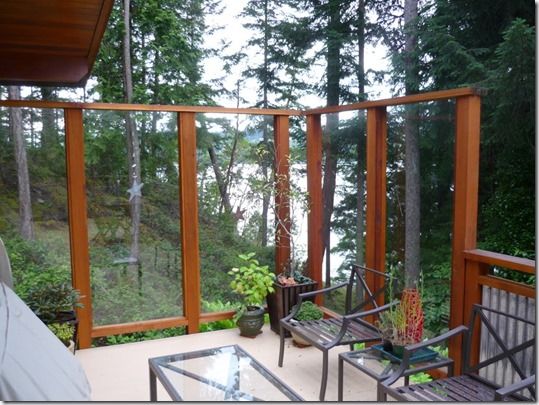 The ultimate protection against wind is a glass wall, but remember that if the wind blows in the same direction as a line of cloches the upwind end must be firmly closed to prevent air funnelling through. Moreover, if it is windy and sunny a watchful eye must be kept for the ‘greenhouse effect’ on air temperature. Air beneath the glass warms on contact with the heating surface of the ground, and if none can escape the same air gets heated over and over again and air temperatures and moisture evaporation rate increase very rapidly.

Such ex­cessively hot microclimates have killed dogs left in parked cars in the sun and can easily cause the collapse of plants. Some ventilation is essential, and perhaps an opaque wash over the glass as well would help the atmosphere in high summer.

Although it is relatively easy to make the microclimate of a garden wetter than the general weather pattern ensures, there is little that can be done to prevent excess water in a rainy season except by enclosure and substituting artificial watering for rain. But it is helpful to remember that walls give considerable protection against rain unless it is driving straight onto the wall, and therefore beds alongside walls have different micro­climates on all sides of a house.

A wall facing south-east strikes a happy compro­mise between adequate sunshine without excessive rain, but the soil beneath may need topping up with water even in a very wet season. North walls are always very dry, though curious things can alter the microclimate even there. For instance, if you have plants under an overflow pipe, they will flourish better than the others because of their built-in ‘rainfall’.